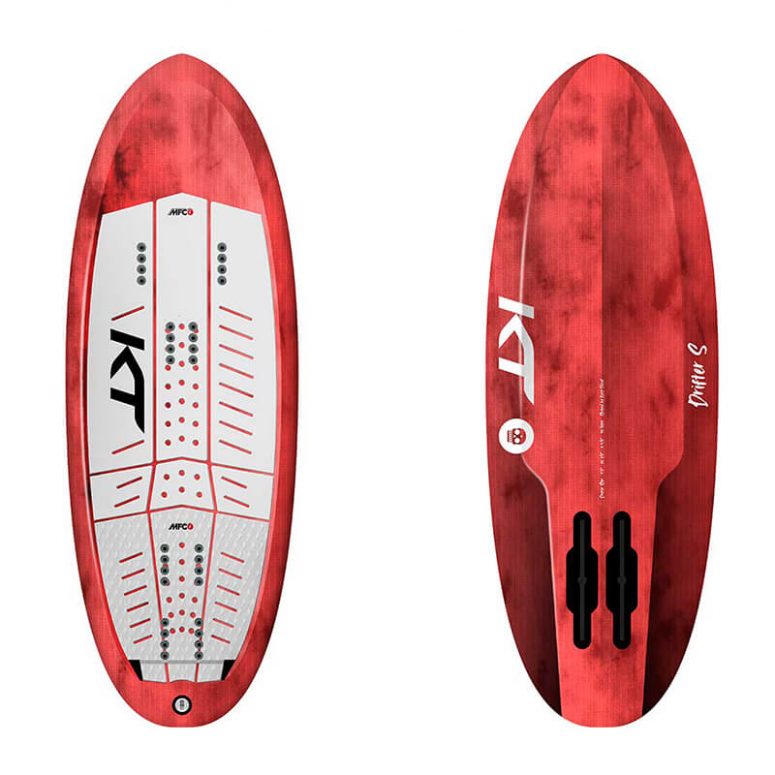 Keith Teboul’s name is synonymous with performance board designs across a spectrum of applications. Now several seasons into the surf foiling game, KT’s prone foilboard lineup spans from the 56L Drifter F down to the 25L Drifter S, which we’ll dive into here.

Let’s open the box and have a look at this 4’4 Drifter S. A sanded red carbon finish and set of premium MFC deck pads comes standard — quite a sharp combination indeed. If the dimensions didn’t already convince you, the Drifter’s pulled-in nose, double concave bottom, and sharply chined rails inform you of this shape’s intentions. The bottom rear is characterized by cutouts around the foil box, which serve hydrodynamic purposes in addition to reducing the board’s “hips” in steep turns. At 18.5” wide, she’s on the narrow end of the spectrum. Rocker is highly pronounced for a foilboard, extending thoroughly throughout the deck as well. These pronounced curves are immensely beneficial to toe and heel feel when riding. The Drifter S is constructed from EPS and wrapped in layers of glass and carbon. Board weight is good for this size class, but not exceedingly light. Strap inserts front and rear invite you to reach for the sky. Curiously, the Drifter S lacks a vent plug — leave her in the sun at your peril.

The board paddles nicely for its low volume, owing largely to the substantial rocker and scooped out deck that promote an ideal paddling position. Compared to even higher volume shapes, the Drifter S is an exceptionally comfortable daily paddler. For its size, the Drifter paddles in efficiently if you’re well placed on the board. A little too far back, and the rocker tends to get in your way and push water. Take off is a smooth affair, with the board readily un-sticking thanks to that double concave and cut out tail. In a rolling takeoff, the board jumps into plane competently, a characteristic that would likely help any rider experimenting with lower volumes. In a steep drop, the deck’s subtle tail kick provides a helping hand by locking down foot positioning. The Drifter S tends to suit a backfoot-heavy riding style, which makes sense given its performance-oriented nature. Whether or not the Drifter S pumps well is a subjective matter, in my experience. Personally, I enjoy the locked in feel of a contoured deck. For others, they prefer a flatter deck with easier foot movement. Be conscious of this detail should you consider a Drifter S.

After spending four months with my test unit, I’ve concluded that it’s a masterful jack of all trades. Whether cruising, seeking to demolish whitewater, or ripping into a wave face, the Drifter S hits the mark. Its fit and finish are second to none, and comes at a competitive price. It doesn’t hurt that Kai Lenny rides one, either.