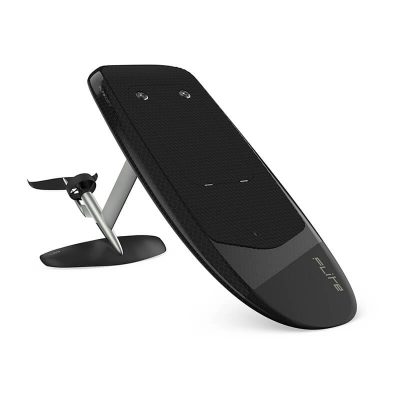 Amidst the chaos of the COVID-19 pandemic, the opportunity presented itself to take a pair of Fliteboard E-foils for an afternoon of social distancing. We tested two of Fliteboard’s offerings: the Fliteboard, and the Fliteboard Pro, each paired with their optimal combination of mast, battery, and front wing.

The Fliteboard is the brand’s standard offering. Coming in at 5’8 x 28” and 100L, this board's construction is a PVC carbon sandwich with an innegra deck finish. Our test foil was equipped with the 40 Ah/2.1KWh Explore battery, referred to as the “Flitecell.” Average runtime is stated around 60-90 mins. The Fliteboard was finished in a slick black, matching nicely with the deck pad under which lies the board’s heart: the battery compartment and the Fliteboard’s brain. The large size Explore battery takes 3.5 hours to charge (under normal conditions), after which it’s a matter of opening the gasket-sealed deck hatch, dropping the battery into its molded home, then connecting two power cables – in total, a 20 second operation that can easily be done on the beach. Connected to our test unit was the 60cm aluminum mast and Cruiser wing. Exact specifications were unavailable, but an educated guess would put this pre-preg carbon wing at around 1600sq/cm. It has a thin foil, mid aspect shape, and down curved wingtips, giving a maximum speed in the low 20s (MPH). The entire unit tips the scales at 74lbs, making it a process to carry down the beach, even with grab handles on the rails. Assembly of Fliteboard models (not including the Air model) should be mostly familiar to those experienced with unpowered hydrofoils. The front and rear lifting surfaces are removable, as is the mast from the board. With the exception of greater weight and quirks such as wiring that require attention, a Fliteboard is no harder to live with than an unpowered foil. Fliteboards come standard with a board bag for day use, as well as travel bags for greater protection for individual components. As for the remote, it’s quite a piece of kit. Synced through both GPS and Bluetooth, the unit is paired to the board simply by touching the remote to a coin-sized magnetic marker on the board’s deck. Input pressure to the throttle within five seconds, and the board begins to accelerate. Fail to apply throttle within this time period, and the Fliteboard automatically activates a killswitch. This safety system operates very efficiently in a crash when the rider separates from the board.

Fliteboard Pro. The range-topping performance option, the Fliteboard Pro is a 5’0 x 24.5″ 70L board. Our test unit was finished in a clean, bright white, contrasting nicely with the tall 75cm black aluminum mast. Within this board was the Sport Flitecell, a slightly smaller and lighter 30Ah/1.65KWh option with an average 45-60 minute runtime. Charge times on this unit are about 2 hours on average. Our test foil came with the Flyer wing, a thin, small (~1000sq/cm), high aspect design allowing for a top speed in the mid to high 20s (MPH). It’s worth noting here that both test setups were equipped with the same stabilizer.

Test conditions were typical Central California: a breezy onslaught of knee to thigh high bumps, and a healthy serving of floating kelp to dodge. Tester weight was 165lbs. To start, all E-foils are amazing by virtue of their nature. Riding a hydrofoil with the ability to instantly modulate speed and angle of attack with the touch of your forefinger is a simply awesome experience. This is also why electric hydrofoils are so easy to learn when compared to their unpowered cousins. However, the great number of parts and pieces within the system as a whole means that the difference between a good and a great E-foil lies in subtle details. A sensitive, yet user-friendly throttle unit is perhaps the most foundational aspect of a good E-foil. Fliteboard brings these qualities in spades, and the result is a nearly telepathic connection between rider and board, allowing for even the most micro of adjustments to throttle and angle of attack when riding. This is especially useful at high speed over rough water. Both Fliteboard models utilize the same motor, although our Fliteboard Pro test unit was not equipped with the prop cage. Motor vibration is impressively dampened when compared to other options on the market, as is the correlated noise. Clever design and materials are clearly at play. Regarding flight characteristics, the initial acceleration to flight phase is characterized by a rather severe angle of attack which only increases as the board’s length decreases. This is true of all E-foils and takes some getting used to when coming from an unpowered foil background. Standing in the middle of the board leads to heavy front foot pressure, but improved turning ability. Conversely, standing forward of center provides a more neutral front/rear balance, but decreases riders’ ability to carve in turns. These facts lead to a riding style of some compromise.

Given that, and without delving into the subtle differences between each board’s setup, the Fliteboard and Fliteboard Pro perform exceptionally. The Fliteboard is easy enough to get flying as its size provides a stable platform, even in choppy seas. The Pro is definitely a challenge, and feels somewhat like getting up on a small tow board. However, once flying, both platforms are stable and solid. No flex can be detected. The most dramatic difference between the Fliteboard and the Pro is in their pitch and roll sensitivities. Wing and mast considerations aside, these sensitivities are primarily a product of board size and weight. The Fliteboard is extremely approachable from this standpoint, making banking an intuitive process even for the uninitiated. For performance-oriented riding, the Pro feels comparable to a large prone foil board, making it the clear choice for playing in waves or carving around flatwater. Traditional considerations such as pumping ability, drag, and glide are virtually irrelevant on E-foils. In our test, battery life was impressive, and even after a 90 minute session, both boards were still over half charged — much better than anticipated. As for speed, we weren’t able to do justice to these boards’ top end capabilities in rough sea conditions. However, a few full throttle squeezes on the Fliteboard Pro gave a very good hint… 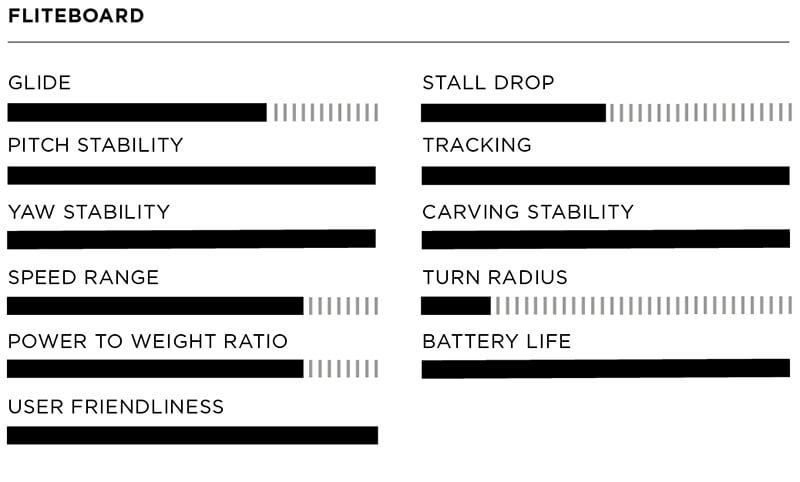 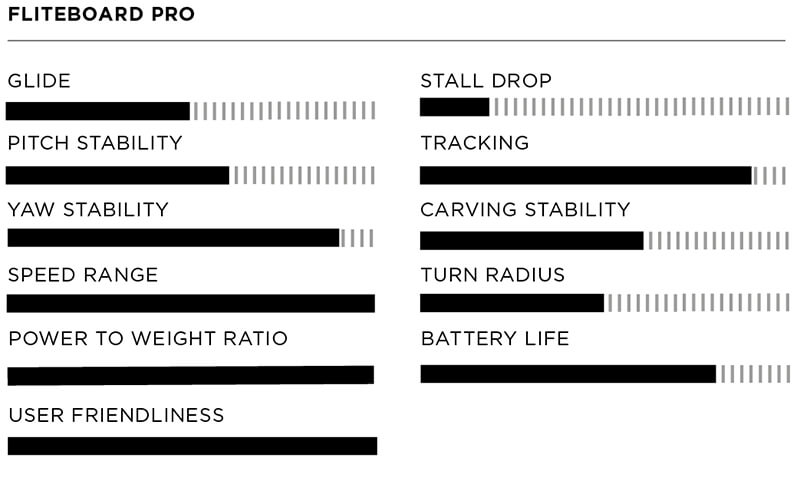