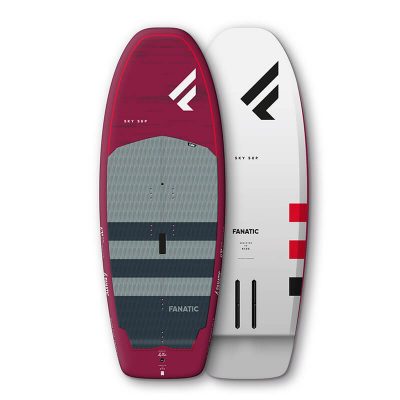 The Sky SUP foil 6’11 sits as the largest model in Fanatic’s range of foil craft, packing a massive 142L into that compact sub seven-foot frame. For 2020 it appears Fanatic have aimed very logically at a crossover product, bridging the gap between a SUP foil and platform that’s capable of entry level wingsurfing, as riders will increasingly grab a wing once the wind picks up.

Fanatic’s shaper Sky Solbach has the benefit of being based on Maui, at the cradle of progressive surf and SUP foiling and it looks like he’s taken influence from the custom brands around him, and applied some good old fashioned common sense to the Sky SUP.

All the bells and whistles are in place. From a practicality perspective, a concave deck is present along with a centrally ridged EVA pad to help with that all important foot placement. The carry handle is intelligently placed to balance nicely with the foil attached. The rails are graced with a full vector net, which look the business, with that tech-on-show appeal sitting behind the top layer of laminate, and should also supply the rails some added protection from paddle dents. It’s a robust feeling construction with mixed composites including some bamboo, but not offensively heavy considering its sizeable volume. We tested with a range of foils from major brands and as the back section is almost perfectly flat where the foil box sits, no shimming was required to get the board to fly nicely. It’s plug and play.

Paddling the board, you immediately feel a high degree of buoyancy and all-round stability. There’s plenty of volume wedged straight under where you stand, providing the novice SUP foiler and/or wing surfer a heap of confidence, particularly if they are a big human. That high level of float enables a very high success rate with paddle in and take off. It makes small surf easy pickings, and your wave catch rate high. Where we think the board works its magic is in the aggressively stepped rail. The flat section seems to provide you with a noticeable extra push, even from a tiny green wave, and this bonus little kick enables you to get on the foil earlier than anticipated. The compact length means you can throw the board more than other vessels of a similar volume; another bonus is the pumping ability is also noticeably improved, even for such a big unit. Taking the board out in larger and more consequential conditions, we were surprised just how well it handled it. That stepped rear and lack of nose means you can get away with some scandalously late take offs. Testing the largest in the range gives us a healthy appetite to test the smaller performance models, including a lightened 6’7 120L LTD model, which is almost surely a performance peach. A version with a windsurf mast option also exists in the larger size.

Wingsurf crossover potential is great due to the shorter length per volume and ease of release. Beginners in particular really rated the Sky SUP due to its exceptional stability as they fumbled around learning their sail handling. All that volume and stability came as a massive bonus. For the more seasoned winger, the board proved great for offshore work in light or inconsistent winds. The volume gives you plenty of float to limp back if the wind dies off, making it a capable 4×4. It’s fairly effortless to pump and get going when it’s light and probably one of the most versatile crossover discipline boards we’ve tested, without horrendous compromise between either activity.

SUP foil boards are now evolving into something far more refined than a modified SUP shape with a foil box glassed in. The Fanatic Sky SUP is a great example of all the good design influences arriving in one product simultaneously, and in a production board. It looks as though Sky Solbach may have also named a board after himself, and he surely wouldn’t have done that without some serious confidence in it. Luckily, he’s concocted a masterpiece.