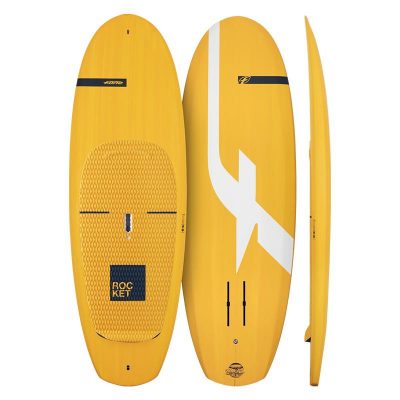 F-ONE are a Montpellier-based multi sports brand and have been at the foil game for several years now. Designer Charles Bertrand, who trained as a naval architect, has been key in producing all things board-based for the French company as we’ve witnessed the expansion of the hydrofoil discipline.

The Rocket SUP Pro Carbon is their high-end construction paddle-in foil board with refreshingly smooth and elegant lines for a SUP foil board which currently have a trend in getting progressively more squat and wide with aggressive channelling and boxy rails and outlines. This has the more traditional lines that you would find on a surfboard. A smooth single channel throughout the rear two thirds of the hull aims for slick hydrodynamics and a clean release, this meets a spoon-shaped rounded nose coupled with a relatively slender tail. Overall, the Rocket SUP Pro is relatively narrow for its length and volume and clearly a well thought out product. The grab handle is well placed, and balances for comfortable carrying with the foil attached. For the traveling foil addict, a breather vent is installed for safe air travel and a neat little plastic screwdriver to install it slots into the carry handle, as a clever reminder to make sure it’s installed as the screwdriver blocks the handle. A good example of the attention to detail put into the product.

A generous little kick in the nose digs you out well if you nose dive after a breach. A FCS GoPro mount tucks in the nose for capturing your glorious creamy carves. The deck has a convex curve across, like a traditional surfboard, but is relatively flat where you stand, and the EVA pad includes a nifty hump in the front which carries over from their kiteboard range to aid foot placement. There’s also an intelligently positioned blue line which spans across to help you place the most comfortable paddling position. A standard 90mm track box is present as well as a deep Tuttle to maximize cross compatibility. The rear of the board where the track is located is relatively flat, so a minimum of shimming and adjustment was required to get the variety of hydrofoils we tested with the board working at comfortable angles. Front and rear strap inserts are installed with plenty of flexibility on position, enhancing its crossover for wing surfing, where it performs excellently as a full displacement learner to intermediate level board.

On the water the Rocket SUP Pro feels light under the feet and minimal. For general paddling on the surface, stability is quite forgiving considering its width, the volume placement under your feet meant at 90kgs we didn’t need to constantly paddle and it would comfortably float us. You need to be a little wary with its roll axis but you forgive it. As for taking off, relatively parallel bevelled rails and the narrow nature of the board mean it builds speed rapidly and with little effort to match the wave, and takes off cleanly with little fuss. Once flying all that carbon means the swing weight is low for a SUP, and meaning your turns and pumping are easily achievable. The narrowness means it catches less wind under the nose than some boards when you make the drop if it’s a strong offshore.

As usual F-ONE have produced an elegant, unfussy and well-designed product, and the four sizes from 6’0 up to the 7’6 means there’s something for most bodyweights. It feels sleek through the water and easy to get up to speed, it wears all 120L exceptionally well, paddling much like a traditional wave SUP.