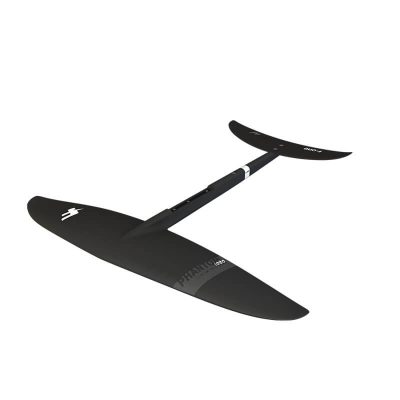 F-ONE have been designing hydrofoils for a decade now, they started designing surf foils and boards in 2018, and the Phantom series are their new high-performance, high-ratio hydrofoils with their sights set firmly on the surf market.

The Phantom 1080 has an Aluminium Mast and baseplate on a full carbon front wing, fuselage and stabilizer. There are four sizes 1080, 1280,1480 and 1780 cm2 and we had the baby of the crew on test, the 1080. The F-ONE Phantom series has a unique assembling design. The mast and top plate are mounted together with two screws and then every aluminum part has integrated stainless bolts to prevent seizing for a longer-lasting product. The bottom of the mast is mounted on a specific mast mount with two screws which is then assembled on top of the front wing fuselage with three other screws. You can choose between the shorter or longer fuselage to adjust your pitch stability and turning radius. The front wing and fuselage are mounted together with a specific radial mount and two screws. The stabilizer (we had the stab C300Surf) is then mounted on top of the trailer fuselage with two 16mm screws. The one-size torx headset gives you confidence to tight everything and is the only tool you need to assemble the foil and mount it on the board.

Assembling the foil takes a little longer than other production foils because there´s a lot of screws of different sizes, but once together it looks like a fighter jet. It is extremely rigid, stiff and ultra-lightweight and the beautiful carbon matt finish shines on the anodized blue of the alu parts. It looks great. The Phantom 1080 wing profile looks unlike any other with its thin ‘autostable’ profile and constant arc, with flat tips twisted a little downward to provide extra stability and faster transitions in the turns.

For this foil tests were run using the F-ONE Rocket Foil 4”2 in waves from 3 to 5 feet. Paddling out with this foil is easy. The foil is light and is not affected by any turbulences in the water so you can reach the lineup as if you were paddling a standard surfboard, but it still stabilizes the ‘row’ effect of the board witch will be helpful on compact foilboards. Catching a wave is very smooth and the foil stays gentle and predictable under your feet, even in hollow takeoffs. It will only lift when your feets are on the board and you can comfortably push the nose down and stand up with zero stress. Once you are ready, the graduated lift is extremely stable at any altitude, deep or close to the surface. You can comfortably build your speed and consider your next move without having to adjust your body position. The foil responds effectively with no latency, builds speed gradually and glides forever… It is pretty insane. Entering a carve is super smooth and you can decide in every phase if you want to sharpen or extend your radius with a perfect flow. It is ultra-responsive but predictable, and sending backhand vertical manoeuvers is easier than on any other foil I have ridden.

Overall the speed, balance and stability are excellent and it is extremely close to a true surf feeling and any competent surfer with a bit of background on foiling will shred on this foil in a couple of sessions and, for experienced foilers, breaching wingtips, sending critical maneuvers with a lot of power and balance, and getting some airtime are definitely part of the Phantom program.

For pumping the Phantom 1080 is very effective. It is impressively accessible and – despite the small surface area – it is very forgiving and efficient. Getting out of a wave and connect to the next one is easy, and you can really rely on the glide and just pump slightly with a little bit of frequency to keep it flying, and the overall stability and balance allows you to focus totally on the next wave. Passing through whitewater is also super easy.

Overall, the F-ONE Phantom 1080 is a high-performance yet ultra-accessible hydrofoil that will suit any intermediate to pro-level foiler. It has enough lift to foil in 3-foot waves but will also work being towed-in at lightning fast speeds in big conditions. A well-designed and very versatile pumping and carving machine.