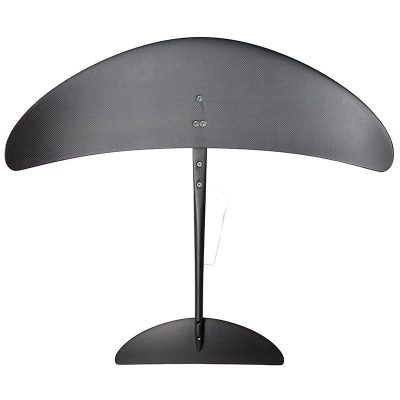 With a PhD in engineering and a decade of experience designing and racing ultra-high speed kite foils, George Hradil, the man behind Delta Foils, is uniquely positioned to design a surf foiling product with premium performance. We tested the L (1265) and XL (1660) wings with a 70cm mast. Wave conditions were 2-4’. The wing shape is mid-aspect, with pronounced tip sweep and curvature and it has the inherent, lively banking traits of a low aspect ratio and the glide and pitch responsiveness of a high aspect ratio. The foil’s ‘standout’ feature is its unusually thin prepreg carbon wing, a testament to its high-performance pedigree and George’s design philosophy that ‘faster is better’. Unlike many surf foils that derive their lift from a thick wing, George’s prowess with efficiency and glide distance (he sands each wing from the factory by hand) make Delta foils quick and smooth. By visual estimation, both the L and XL are about 10-30% thinner compared to other brands’ wings of comparable surface areas. The rear stabilizer is mounted on top of the fuselage and has a similar sweep angle to the front wing with consistent dihedral throughout. Delta’s tapered carbon fuselage is shorter than most to improve pitch liveliness when pumping and carving ability when surfing. We tested the aluminum mast (carbon is an option in tuttle form) which is stiff and well-sealed, and comparable in weight to most carbon masts. There is then a carbon top plate which the strut mounts snugly and cleanly. Assembled with a total of nine screws, the largest XL setup comes in at well under three kilos. Overall it is an intelligently engineered and elegantly designed package.

On the water and you experience significant gliding distance, quick acceleration and stability at speed coupled with a lively feeling underfoot. A short fuselage combined with the smaller L front wing makes a fantastic surfing package that promotes a rear foot bias when laying into a big sweeping turn or a lightning fast hack off the top of the face. When pumping through flat sections or going back out for more waves, the setup’s high pitch sensitivity feels fantastic underfoot, while remaining stable and competent throughout the entire range of motion. With this set up Delta have managed to combine the best aspects of the foiling experience (glide and speed) with less of the drawbacks (heavy front foot pressure) when you really want to move. Even in small testing conditions, the Delta L is as easy to pump as other brands’ wings with larger surface areas. Although the XL is better oriented toward larger riders or distance pumping, it manages to carry many of its smaller sibling’s traits, with the exception of greater front foot pressure and a slightly reduced bank rate – something inherent to all wing shapes as they scale up in area. These are undoubtedly superb foils but do bear in mind that the thinner Delta wings only start to fly at higher speeds, requiring a later drop or more powerful wave. High pitch sensitivity is great for precise riders, but more difficult to learn on, and the Delta’s stall speeds are also higher and come more abruptly than they do for thicker wings. These drawbacks are only really relevant to beginner and intermediate foilers, though. For advanced to professional riders, Delta offers an extremely fun package which they can grow with as they push their level even further.