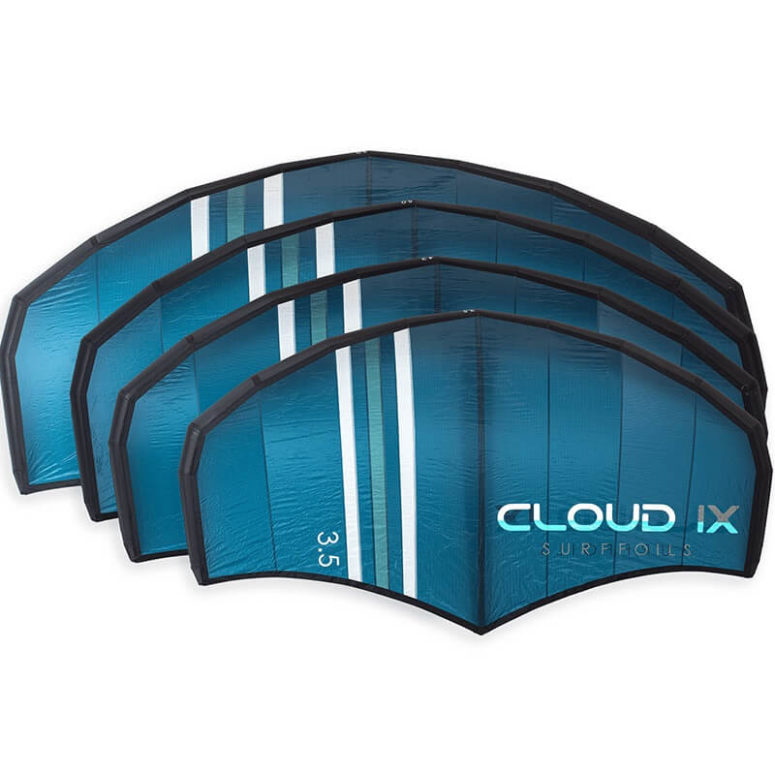 The Cloud IX Wind Wing is an all-round wing geared towards all levels of rider. With three strut handles, and one leading edge (LE) handle, the Cloud IX wing is intuitive and easily accessible to riders of all skill levels.

Right away the attention to detail is apparent in the over-sized expanding Dacron backpack. A large zipper pocket on the front gives ample storage for a leash, repair kit, and other smaller items, and a large expanding main pocket makes packing the wing after your session very easy – even if there is still a small amount of air remaining in the bladders. The wrist leash is very thin and lightweight, with a small amount of stretch to reduce shock loading on the rider. A simple Velcro wrist cuff offers a secure connection that remained closed throughout the entire session. This minimalist design keeps the overall wing lightweight and easy to use and, staying with the theme of simplicity and weight savings, the canopy does not have any windows. This 4.2m wing was tested using a 4'6×19.5 @ 33L board, 1250 foil, wind 30-40mph. Rider is 6'4 and 170lb. Overall flatwater conditions, small wave riding.

The Cloud IX Wind Wing's deep profile has significant low end pull that is very evenly balanced between the front and back hand. The wing was easy to ride with minimal rider fatigue after a one hour testing session. The ride is smooth and steady, accepting strong gusts without blowing the rider off the water. This is partially due to some give in the overall structure/airframe. The deeper profile wants to sit slightly further back in the window, which exchanges some upwind performance for straight line drive, and low end grunt. There is a definitive backwinding point if it is sailed too steep into the wind.

This wing will perform best in powered, to slightly under-powered conditions. Riding this wing overpowered or over-sized will reduce some of the performance and it’s time to head in and pump up your smaller wing. During downwind gliding and wave riding the Cloud IX Wind Wing demonstrated 100% depower with slight rocking during stronger gusts. The LE handle is on the bottom third of the wing (strut side) versus being in the middle of the LE. This creates a bit more of a comfortable ride, at the cost of some handling. Flipping the wing is easier by handling the LE versus just using the handle.

The balance between both the front and back hand, as well as in the neutral point made tacking very easy, and flatwater freestyle was a breeze. The wing was easy to throw around and was consistently easy to recover and get back under power. When passing the wing over head or through the window there was a natural roll that was very predictable which made blind maneuvers easy to execute knowing exactly where the wing wanted to go.

This wing is geared towards riders who want a smooth ride geared towards cruising waves, gliding downwind, or practicing some tacks. Freestyle riders and jumpers may prefer a bit more stiffness in the wing, but for waves and all-round riding this is a classy and well thought out product from Cloud IX.