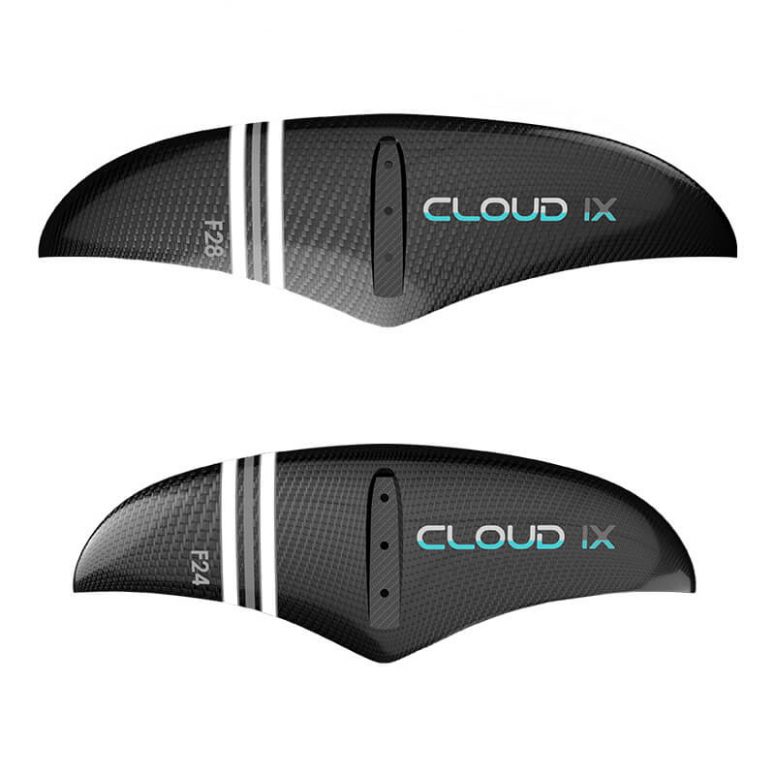 Released at a time when most in the industry put on their horse blinders and dropped everything to bring high-aspect (HA) wings to market, the good folks at Cloud IX took an alternative route via an innovative mid-aspect outline. Seeking to circumnavigate the disadvantages of large HA shapes — wide turn radius, slow banking reactivity, high pitch sensitivity, and low speed limit — Cloud IX proposed a wing with a highly tapered outline and modest span (relative to the area). Such outside the box engineering sought to retain the best attributes of surf wings while tapping into the distinct pumping advantages of high aspect designs. In this way, the F Series was pitched as a best-of-both-worlds hydrofoil. The question is, does it live up to such a high standard?

Let’s begin with product presentation. Cloud IX has long since been a leader in this regard, offering customers a beefy, zipped gear bag and premium anodized M8 hardware. Complementary thread grease ads a nice touch. The hydrofoil itself is entirely carbon from top to bottom, unlike many at its price point that mix alloy bits with composite ones. Fit and finish are impressive, as is the generally beefy feel of each component. If you’re weary of fragile foils, the F Series will soothe your anxieties.

As for technicalities, the F Series comes in five sizes from the smallest F24 (819 sq/cm) to the range-topping F42 (1619 sq/cm). Cloud IX offers two mast sizes, either in 30”/76cm or 26”/66cm lengths. Fuselage options are either 27”/68cm, or 24”/60cm, with both offering three possible stabilizer mount points, varying a bit fore or aft — no shims to be found here. The F15 stabilizer is the only option currently available, but note that it comes with pre-marked guides for those inclined to “chop-shop” their setup to perfection.

Now for where the rubber meets the road: riding. Test unit specs included the 30” mast, 27” fuselage, and both the 24 and 28 front wing sizes. The stabilizer was primarily left in its most neutral position. Flex in the system is very nicely managed, I suspect due partly to the sizable overlaps in component fittings (the mast sits deep in the fuselage, for example) and the full-size M8 hardware. In a steep bank, this lack of flex and reflex adds a welcomed level of predictability to riding, encouraging you to smash that whitewater into the next decade. Down the line, both the 24 and 28 are confidence inspiring in their pitch stability, while maintaining a high degree of sensitivity for their aspect ratio. In a straight line, the F Series has a higher-than-average looseness in yaw, giving it a skatey feel. Long and away the most impressive characteristic is this rig’s desire to bank. In a drawn-out top to bottom turn, the “edge” is almost never quite there, inspiring the rider to turn harder wave after wave. As expected, the 24 scales each of these effects up from the 28, but does so without ever becoming overwhelming or unmanageable.

The glide on both set ups is good, but not top-of-class and, while the 24 is noticeably faster than the 28, for its area, these are not ‘speed machines’. That said, there are many advantages to not going ballistic with speed: staying in the pocket, riding slower, crumbly waves (as is typical in Southern California), and generally ripping turns minus the risk to life and limb of ultra high-speed foiling. If that sounds like you, then the Cloud IX will cater to your needs perfectly. Oh, and it won’t break the bank, either, so the F Series is also a good value proposition.