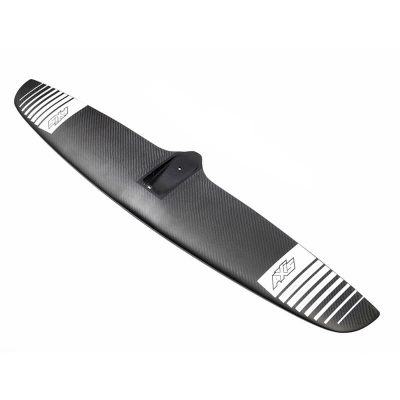 New Zealand based foil brand Axis have been working diligently at their development again, and have expanded their already comprehensive range even further with some refined higher aspect flat shapes. The result is the Glide series wings, which come in sizes dictated by their spans – 910, 1010 and 1150. These all go straight onto the existing Axis mast and fuselage range with some slightly shorter countersunk bolts to adjust for the thinner profile, and they offer complete backward compatibility. With a span of well over a meter on the largest wing, the low levels of flex are impressive, and the thought that has gone into designing the existing system is evident. These new front wings have been derived from a completely new foil section, different from the original set of S-Series wings, so expect a different evolved performance from the 920, 1020 and even 1000.

Paddling the 1150 got us into some wave conditions that previously wouldn’t have motivated us to get the kit out of the van. The sheer lift and stability of the wing underwater is very apparent underfoot with a SUP, and you gain a substantial amount of roll stability particularly noticeable with a smaller board. Short, well-timed strokes paddling in when you get a little lift from the wave, yield a surprisingly early and gentle pop onto the foil and (if you keep position in the power) an enhanced glide we’ve yet to experience on tiny waves, when normally you would be bogging or pumping like a mad man. In fact, telling yourself you don’t need to pump as much could be the most challenging part…

Although its high aspect (AR7.4), small chord and massive span appears an extreme shape, and maybe looks a little threatening to ride, the lift and stall characteristics are so soft, the usability extends further into the realms of beginner foiling than you’d imagine. We did some test sessions behind the boat at low speeds with complete beginners with the 1150 wing, and due to the exceptionally high roll stability that wide span provides, and the early lift and wide speed range, we had some people learn to foil very quickly, which could be a slightly unintentional but potent side effect of successful design. We slipped the longer fuselage on and tried pumping from the boat, which seems to require less effort and a slower pump rhythm – you could go as far as you like before your body gave up. The dock start potential is as huge as its span.

In a wingsurfing environment the 1150 is a light wind enabler, and its early lift is comparable to the 102. Expectations need to be managed on its cornering ability, but it is definitely no slouch, and with the 460 rear wing and a short fuselage it will be tight enough for most. What surprised us most about the 1150 is the top end when pushed. We were literally limping around with a 6m wing, pumping hard to get onto the foil, but then managing to pump into some fairly powerful small waves – a true 0-60mph experience, with the control in the top end very impressive. There was no heavy pressure required on the front foot to prevent breaching, and pitch control remains. For making the most of light wind and small wave conditions, you are going to have far more fun than you would expect with such a large foil. It is a session saver.

For the average weight multi-discipline rider mainly focused on wing and SUP, the 1010 is probably the sweet size in the range with the most balanced characteristics. If you have ridden the 1000 before, prepare to be surprised by how much more friendly a foil with similar stats on paper can be. If you already have an Axis setup and fancy a step up in outright speed and glide from the 1020 or 920, this could be an excellent option. The 1010 takes all the pleasant attributes of its bigger sibling and makes things faster and snappier. It suits more positive wave and wind conditions. Expect rapid arcing turns – so deep in fact that you might even pop a wingtip out of the water – which it handles with complete control. If you make direct comparisons to the existing 1000 wing, expect softer lift and stall characteristics, and more confident cornering at speed. Not to forget the 910, which suits higher wind speeds, more powerful waves or smaller humans and carries over the same characteristics.

When it comes to getting these wide span creatures around the corners, Axis now provide a massive amount of options when it comes to stabilizers and fuselages. We tested the new Glide series mainly with the 400 and 460 stabilizers. The 460 has a narrow profile, is completely flat, with no winglets. It provides a loose feel to your turns and extends the top speed range. This is really evident when entering a faster wave that jacks up and gives more speed than expected – even with the massive 1150, you can make some impressive forward speed with control. It makes the setup feel like it is running far more pitch neutral and of course that reduced drag makes for enhanced straight-line glide.

One of the major positives of the Axis setup is the relatively low cost of the modular parts and complete cross-compatibility. There are no distinct rules to play by and it is really simple to change a part mid-session to experiment. Your setup is a matter of personal taste, and it is all catered for. Adrian Roper’s depth of technical knowledge, and critically how to apply it to the real world shines through with the Glide series. Few other systems offer the versatility, customization and price point, and it sets a benchmark of just how friendly and accessible a higher aspect foil can be.