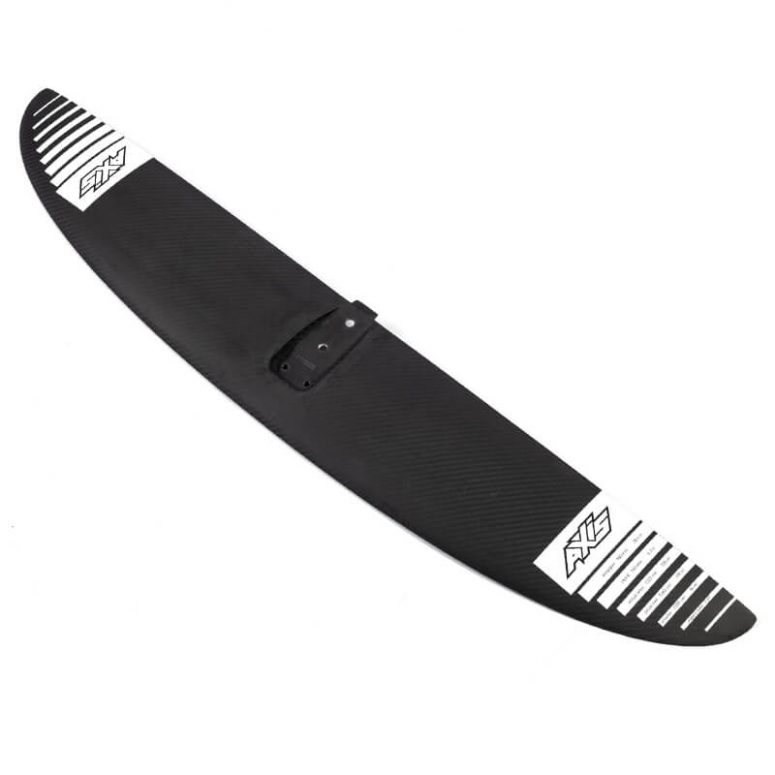 Not one to let product development stagnate for long, Adrian Roper and his test team have been scribbling at the drawing board again and present a brand new High Performance Speed (HPS) wing collection which bolts (as firmly as ever) onto an all new leaner and meaner Black (B-Series) fuselage.

A design limitation of the original red S-Series was the depth of the fuselage connection, which meant the front wing profiles had to have some extra material in the middle forming a small hump where the bolt heads sat. So when AXIS wanted to push the wing’s parameters towards more efficiency and speed, it was necessary to design a new thinner fuselage system to accommodate the smaller and faster wings. It is compatible with the existing aluminum mast system and ‘doodad’ connection as well as the new carbon mast, which we’ll get onto in a minute.

Looking at the statistics on the HPS 980, you’d be forgiven for thinking it’s a touch on the extreme side, particularly with an aspect ratio of 7.49, but in practice this isn’t really the case. Although you’re getting a lot of performance enhancements in speed, glide and general efficiency, there’s still an air of practicality about the 980, providing you have the wave or wind power to get it flying initially. We found it an excellent step up from the 1010mm S series for both wingsurfing and wave driven foiling. There is noticeably less drag during acceleration, and the top end control is impressive. We pushed this with fast waves, fast prototype wings and even resorted to kite power, and the 980 remains completely unflappable and feels precise, lively and composed underfoot. It also remains eerily silent considering the speeds you can achieve. The good news is that for existing S-Series owners, your rear wing collection is compatible, with just a small shim for the stabilizer required. We paired it with the 370 tail for wave work, delivering a free, reactive and grippy cornering experience as well as the 460 flat tail which provided straight line speed, glide and enhanced pumping ability. The front wing connection changes on the Black fuselage to 2 x M8 and 2 x M6 bolts, in a T formation which, in typical AXIS style, is a snug fit and isn’t going anywhere.

We also got our mitts on an 86cm V2 carbon mast to pair with the 980. The well-finished tapered mast is very sturdy at the track mount and sports two 30mm M8 bolts for the fuselage attachment, which is rock solid. Back to back testing with aluminum is interesting. You get a weight saving of around 600g vs the 90cm aluminum system, which is quite a significant weight drop you can feel when handling your setup. The carbon mast slices the water in a more sleek manner and felt like it made board release a touch earlier. It’s a very stiff mast, but not as stiff as its aluminum counterpart. The controlled flex through the system seemed to smooth the experience through choppier sea states, particularly noticeable when used with a wing. From a cost perspective, it’s definitely an exotic and luxurious offering, but if the budget extends to it, then why not? You can definitely feel a positive difference.

The AXIS range continues to evolve into one of the most comprehensive range of wings and stabilizers on the market and the B-Series wing set extends this in an exciting, and no-compromises, development tangent.