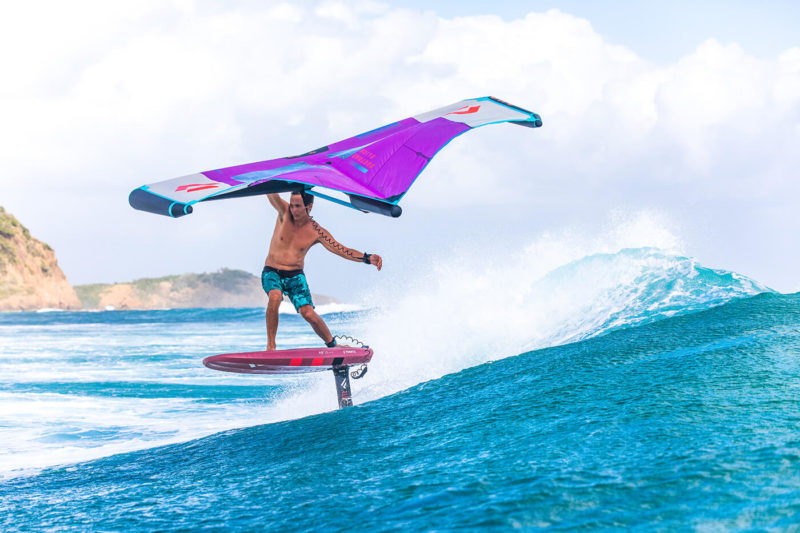 Kiteboarding legend, Jeremie Tronet, lets us in on why the Grenadines is the perfect wing destination…

The endless possibilities emerging with the creation of a new sport are exciting and travels is a big part of what water sports lovers do.

The search of a new destination, the new unridden wave or that feeling of sharing your passion with the local population stunned to see the tools you are using to enjoy yourself on their local beach are hard to reach feeling nowadays.

Surfing had covered most of these spots and finding an unridden wave has the likes of a gold prospector with very rare finds. When kitesurfing came along we saw a big resurgence of searching new beaches and spots where people had never seen a kite before. I spent the beginning of my kitesurfing career searching for such new spots. 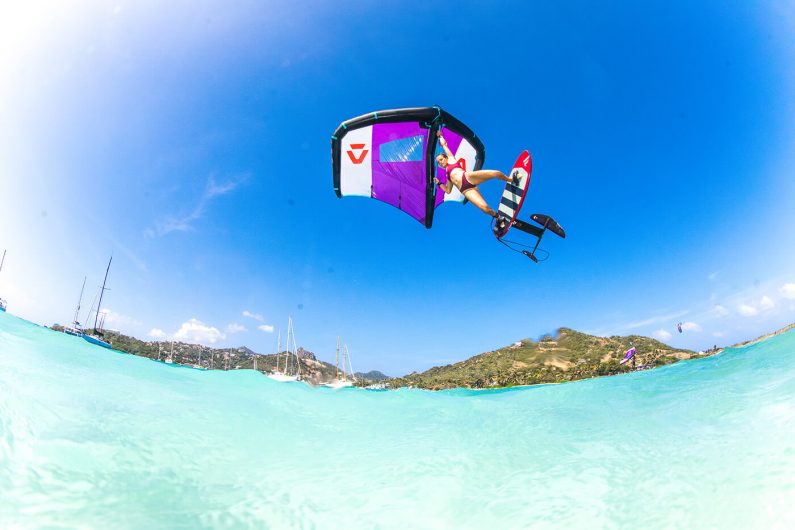 We are entering in a new era of discovery with the recent introduction of wing foiling, waves, flat water and endless Ocean downwind are all new possibilities new destinations can offer us.

In the heart of the Grenadine islands, in the Caribbean Union Island the kitesurfing paradise home of the JT Pro Center and now Duotone Pro Center, the search for the perfect Wing Foiling spot is ongoing. Surrounded by some of the most beautiful islands you can ever dream of we have the chance to be blessed by constant trade winds from 15 to 25 knots from November to July, a warm 30°c temperature all year long and the clearest water you can ever dream of.

This is not by mistake that Fanatic and Duotone have chosen the JT Pro Center spot on Union Island to use it as its location for the shooting of the Duotone/Fanatic Wing Foil Academy, the largest video project ever shot for the creation of a free app to teach you wing foiling.

The authenticity of Union Island at the heart of the Grenadines makes it an unforgettable little Caribbean typical island, with its local fruit market, beach bungalows, and laid back and friendly lifestyle of the local population.

We are surrounded by many islands all very easily accessible with the JT Pro Center's speedboat we use for excursions, each island as well as the amazing Tobago Cays marine park are all located within a 15 minute range. 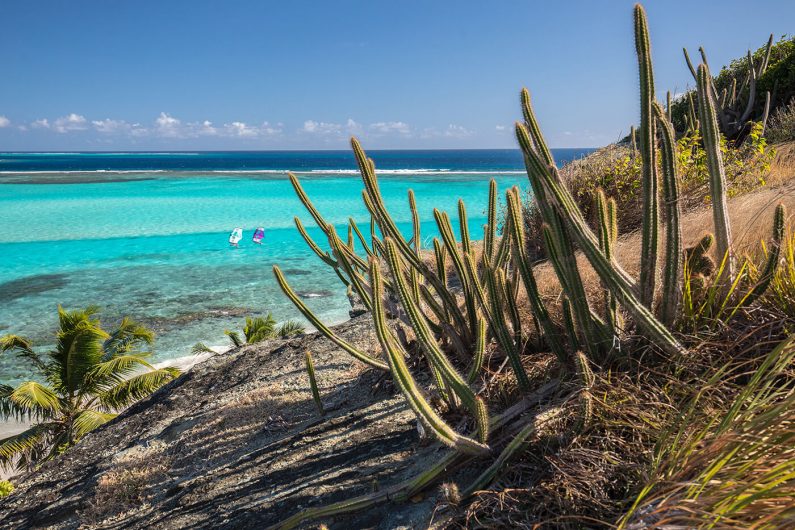 When it comes to finding and discovering new wing foiling spots we have to consider the depth of the lagoon, the wind consistency and how deep the reef is for wave riding.

One spot that ticks all the boxes is one of the most beautiful spot you can ever dream of, the Tobago Cays Marine park. Located only 15 min from the center, the Tobago Cays marine park is this endless swimming pool where you can swim with turtles. The water here some of the clearest in the world, with endless shades of blues and turquoise.

Launching the new Duotone Slick from the boat was a breeze, with my Fanatic Sky Wing 5.0 I was cruising back and forth and flying over that crystal water. The feeling of wingfoiling is unpaired but when you wing foil on such a beautiful spot you know you have reached the pinnacle of any sensations you will ever get while on a board in the water.

The marine life here is amazing and between session the center's staff will take you to snorkel with the peaceful sea turtles.

One of the best rewards after so much action is the beach BBQ. It is organized by some of Union Island locals and residents commuting every day even in rough seas with their local speed boats between Union Island and the Tobago Cays marine park. 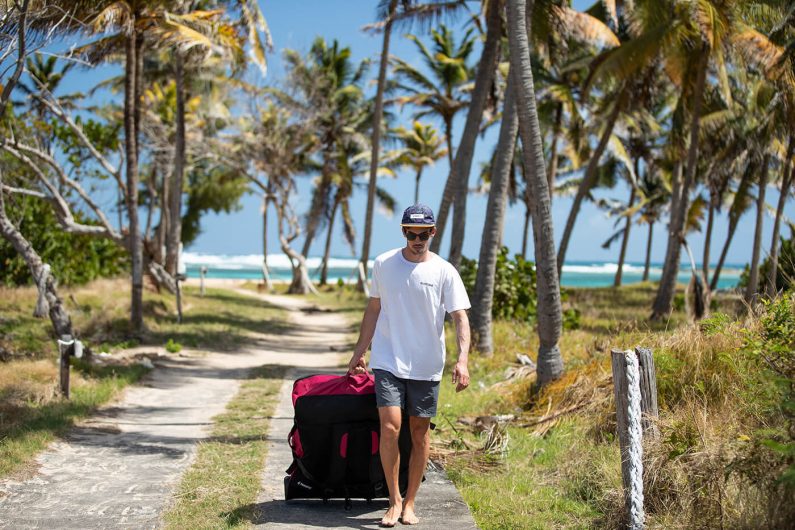 They prepare one of the best lobster BBQ in the world and this has been confirmed by thousands of people and renowned chefs. What a treat, eating your best lobster on a Caribbean beach after foiling on the clearest water in the world.

The Tobago Cays passed our wing foiling spot test with flying colours and we could say yes we were the first ones to ever wing foil on this spot!

After such a day we had two options, the first was to simply sail back to the JT Pro Center and head to town to visit the local bars and restaurants or explore a new way of island hopping… DOWNWINDERS.

When it comes to discovering, there is an instinctive need for crossing and a journey. And a downwind island crossing between the Tobago Cays and Union Island becomes a serious challenge that needed to be done.

Starting in the flat clear water we quickly made our way to the deeper blues of the ocean and as you get outside of the reef this is when the ocean swell comes in and you can finally depower your wing and let yourself fly over the swell. Waves are everywhere and riding endless downwind swell feels like a constant analysis of when and how long the next wave will be pushing you for, but whenever you miss one you just use your wing to get the extra lift needed to catch the next one. 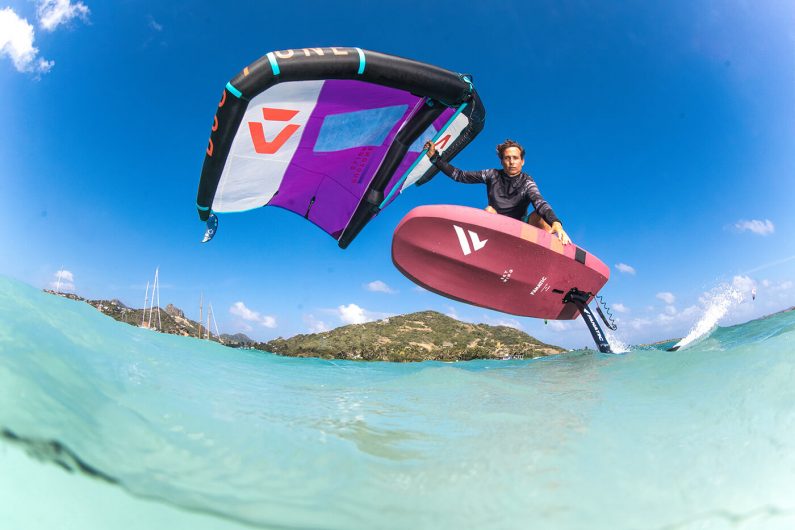 I won’t lie but finally entering the Union Island lagoon at sunset feels like a much needed reward for both your legs and arms but such an achievement of crossing between two islands will remain in your mind forever.

One of the best kept secrets of Union Island remains its wave spot. I have had the chance to discover amazing waves all around the world during my travels for surfing or kitesurfing but there was always a downside.

The spots were overly crowded or whenever it was an empty wave, reaching it meant a few days traveling and less than comfortable sleeping options.

They say there is no place like home and I found out that it is true when it comes to this wave spot.

The Grenadines are not known as a wave spot but we have the chance to have in my opinion a world class wave spot for foil surfing or wing foiling. And that wave is right in front of the JT Pro Center a mile out next to the neighboring Palm Island.

I think the reason I automatically fell in love with wing foiling was the day I realized I could use it as a tool for foil surfing. I love to paddle in the waves and foil surf but to get the true endless surfing feeling nothing beats getting towed in way before the wave breaks so you can surf for mile long rides.

The only downside is the need of a jetski or boat to pull you in the wave. Using my wing has been a revelation in the sense that this wave has a constant side/side offshore wind that allows you to use your wing to get towed in the reef break. 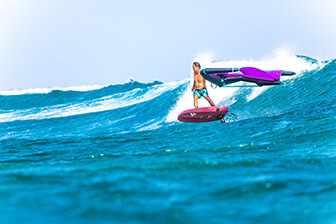 This spot is the perfect spot for wing foiling, the wave tend to rise long before hitting the reef break which allow you to gain enough speed so you can fully depower the wing and enjoy the endless glide and feeling of flying and surfing. The reef is deep enough and as the wave breaks it often declines into smaller breaks, opening in different directions and transforming your ride in an imaginary skatepark where turning, carving and pumping to the next wave becomes highly addictive.

But one of the perks of surfing this amazing break is being alone or with the friends you decided to share your session with. The wave is actually one mile out and it is recommended to have a support boat nearby just in case something happens which the center offers.

We covered beauty, challenges and waves but when it comes to ease the main spot of the JT Pro Center is gold standard. The rooms offered are located right on the beach, there is a full service with an air compressor, a beach bar, lounge beds and a safety boat. The spot has some shallow areas but a nice deep channel perfect for wing foiling and practicing your jumps and freestyle tricks. You can also decide to practice in deeper water as the lagoon opens to the ocean.

The school also offers wing foiling lessons to your friends or partners who have joined you on the trip, who can practice the joys of this new sport on a regular SUP or even on a foil board.

All the information to book a room on the island or to fly here are on www.kitesurfgrenadines.com.

Union Island and the Grenadines still have a lot of unexplored spots for wing foiling, we have found of some the first precious gems but we know there are still some unridden waves or lagoons, so as the sport grows the search continues and you could be part of it. 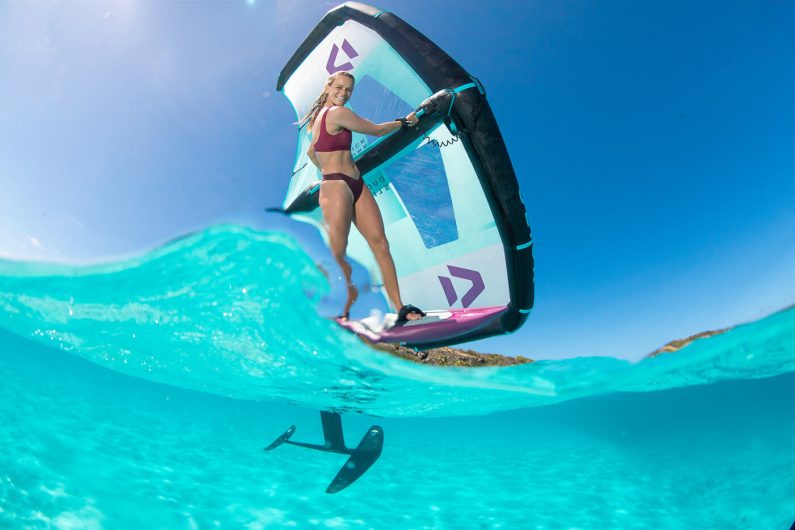