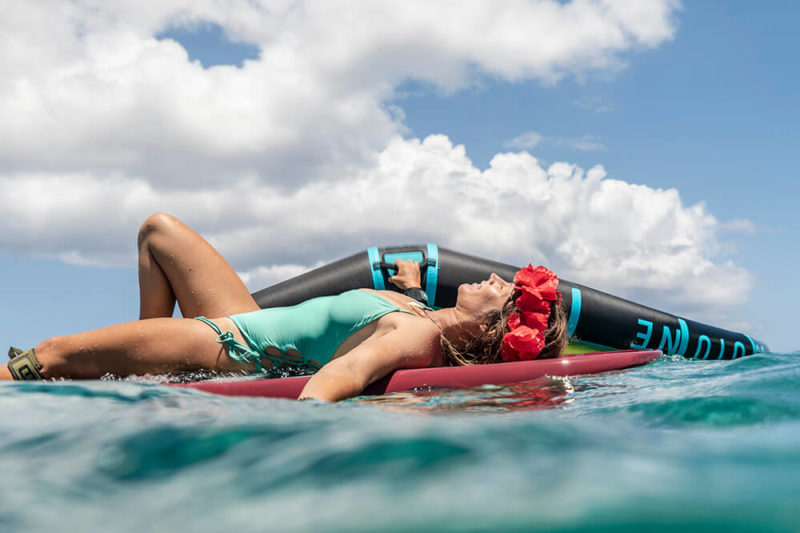 Formula Windsurfing Vice world champion, Sarah Herbert, shares her tales of wingfoiling everyday in front of the majestic mountains of Tahiti… and free diving with whales.

When people go to Tahiti to practice wingfoiling, they logically choose the windward side of the island. There they'll discover the famous Pointe Venus peninsula and its inlet.

It lies on the outskirts of the French Polynesia capital, Papeete, where the view of black beaches, embellished with coconut trees along the coastline, has unfortunately been ruined by unsightly construction. 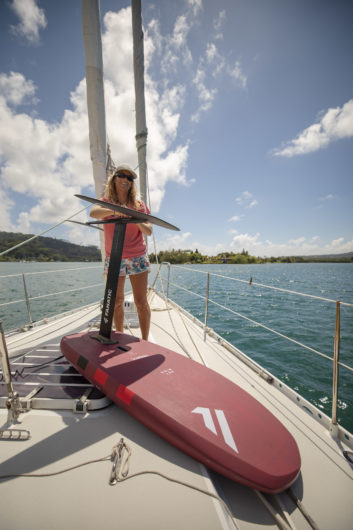 To find that Tahitian picture postcard one has to venture further afeild. The Tahitian magic still lives there, filled with white sand beaches and the coconut trees. It was in this setting that I discovered the true jewel of the mother island, called to by the kings of the sea.

This story, in part, begins on a paradisiacal anchorage Bequia, a small island in the Caribbean. Here I met a French couple on their sailboat the Diatomée. Marianne Aventurier and Alex Voyer generously offered to give me a freediving course and it was here that I discover my great capacity to hold my breath. Freediving won me over, I fell in love with the activity and promise myself to spend even more time underwater. But I had no idea the experiences it would lead me to.

On my sailboat Maloya, I travelled to Polynesia with the desire to stay there for a few years. I wanted to discover the string of islands' numerous surf spots and the incredibly rich underwater biodiversity. In August, the whale season starts. I had always dreamed of swimming with them. So I express this intention to the universe and two months later, a meeting took place.

While going to the Motu, I saw a whale jumping. I followed her, parallel to her body. The whale was on one side of the reef, with me on the other side. Accompanied by a friend, we walk on the reef and throw ourselves into the small rollers toward the open sea. After a long search, I saw the rostrum of a whale calf on the ocean's surface. Then, with limited visibility, its mother appeared. With its large white pectoral fins, humpback whales is easily spotted. This was a very sweet exchange with one of the biggest mammals of the world. 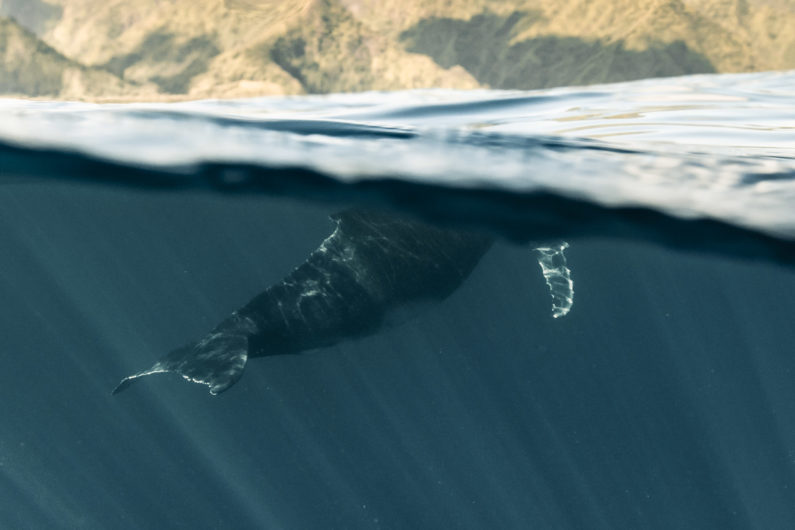 I decided I wanted to know more about these animals. I wanted to observe them where they gathered every year to give birth and mate, between the islands of Tahiti and Moorea. My friends from Bequia, Marianne and Alex, just happened to have anchored in Taravao Bay. So I gathered – my board bags, my foil and my wing, as well as my weights, my wetsuit and my fins/mask/tuba – and set out for ten days of exploration on the peninsula of Tahiti.

There were lots of activities on the program. I had some amazing snorkeling sessions, between 10 and 15 meters deep, on the wall of the reef watching the majestic fish, such as a magnificent Napoleon. There was whale watching with specialized excursionists. I recommend Moby Dick, who has a very gentle and respectful approach to animals. I feel it's people's responsibility to do thorough research to ensure they don't participate in the disturbance of these living beings. 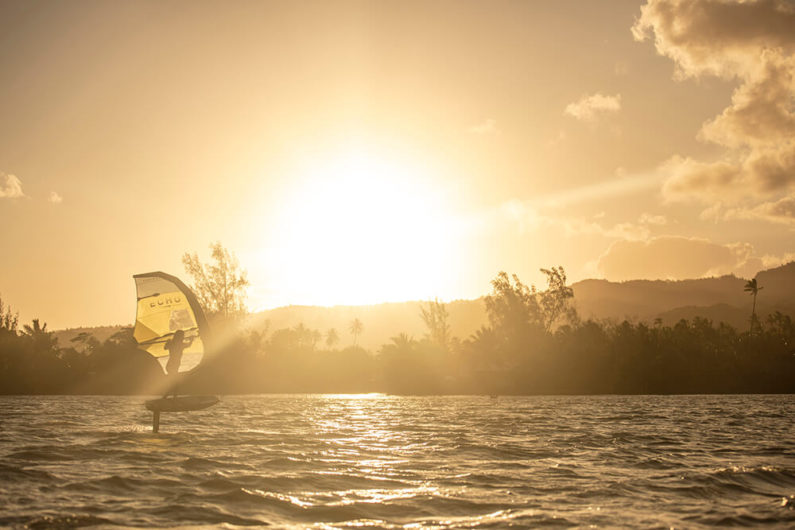 And to complete this perfect schedule, daily wingfoil sessions in Phaeton Bay. What a joy to be able to launch from the boat. I did a great downwinder, between the mouth of the Papenoo River and Taone Beach on the windward side, surfing the onshore waves and then cruising out on the open sea. Some days, I'd leave the beach lying on my board in search of wind. I'd paddle out to the open sea to reach the windy zone. Wings are so versatile, making them prefect to deal with a variety of locations.

Sailing in Taravao in the Phaeton Bay was breathtaking. On one side are the steep peaks of Tahiti, crowned by Mount Orohena standing 2,000 meters tall, and on the other side, the mountains of the peninsula, where the road ends and time stops. Virgin landscape stripped of man.

From the top of my foil, my eyes got lost in the depths of these inaccessible valleys. I begun to dream of those cliff climbers, the “Pi'imato” who roamed the ridges in search of the feathers of sacred birds to adorn ornaments and costumes. In these valleys there are surely still many “Marae” to be discovered, these sacred places, a kind of volcanic stone earthwork, where people gathered for social, religious and political events. 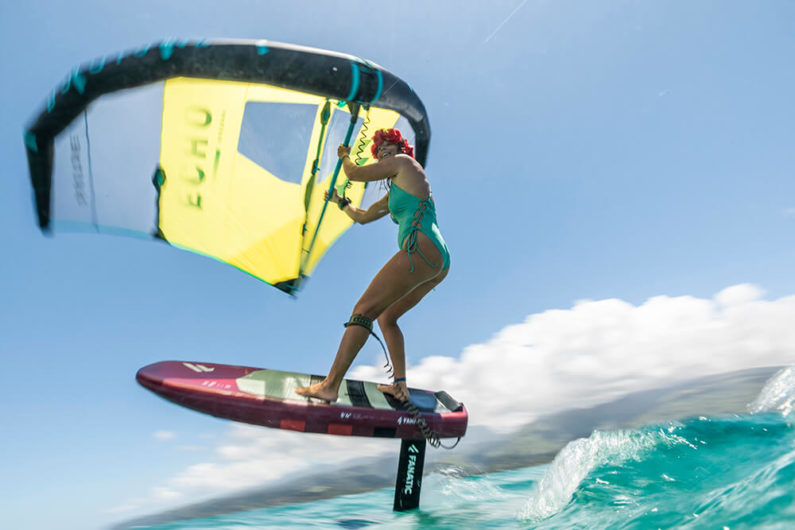 I cut the surface of the water with my foil and sped along the coral necklace that surrounds the island of Tahiti. When my gaze was not on the lush nature, I looked for the slightest breath, a caudal that would pierce the horizon.

Swimming with whales, learning to observe them, finding them on the blue immensity, was also an unique adventure. It's hard to resist the urge to discover the queens of Polynesia, the Megaptera Novaeangliae. However, our presence has an impact on their behaviour. I am well aware of it and that is why it's necessary to choose the right provider to observe them and respect some rules of approach. To function with intuition, to observe, to take time, all these steps remain the best reference marks to approach these beautiful animals. Wait for the natural encounter, the one that happens by chance. After these two outings, I would let life choose again to offer me a moment of infinite love with these creatures.

Every year humpback whales come to give birth to their calves in the Polynesian waters. They've travelled far, a long journey of nearly 6,000 kilometers from Antarctica. Most of the time, they mate en route, before arriving in the warmer waters in early July. Calving usually takes place in September, in Tahiti and Moorea or in Rurutu, in the Austral Islands. Whale season runs from July to November. During this time they are fasting. They then leave and reach their destination in about a month-and-a-half. It's only when they reach the polar waters and achieve the incredible odyssey of travelling 12,000 kilometers, that they'll again feed on Krill, allowing them to replenish their fat stock. 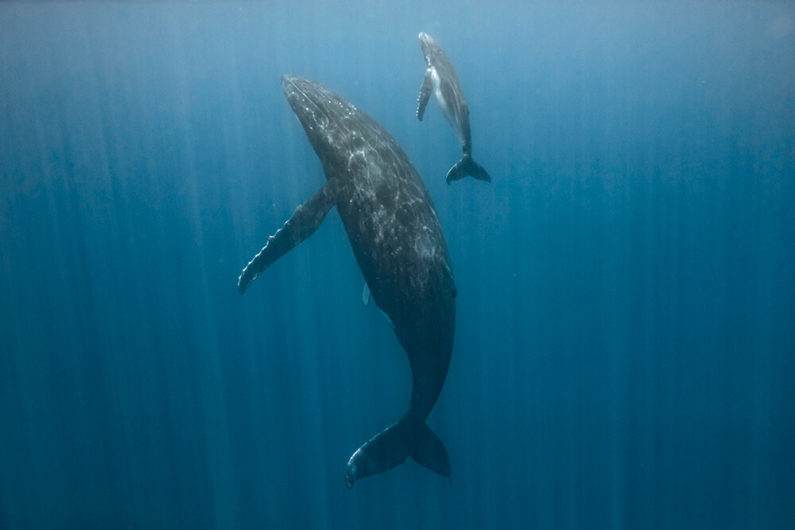 Humpback whales are cetaceans that can measure up to 15 meters and weigh 25 tons. Only the male whales sing. During my different excursions, I had the opportunity to swim with whales and their calves. Sometimes alone in the water, I could hear a singing male whale from miles away, making the ocean and every cell in my body resonate.

While researching on the Internet, I realized Tahiti and her islands have become a Mecca for whale watchers. This craze is due to awareness campaigns, spanning the last 20 years, that focused on the fate of the whales. The water in Polynesia also provides optimal conditions for observation at a temperature of 28 degrees.

Sometimes I am not sure if I should talk about the whales and my experience. Like most people, I worry about what affect participating in the popularity of observing these creatures could have on their daily lives. But I have the optimism. I believe that to love it is necessary to know, and once we know the beauty of things we want to protect them even more.

So if you go to see the whales, don't forget that they are living beings and before you do anything, ask yourself how you'd like to be approached if observed in your home. 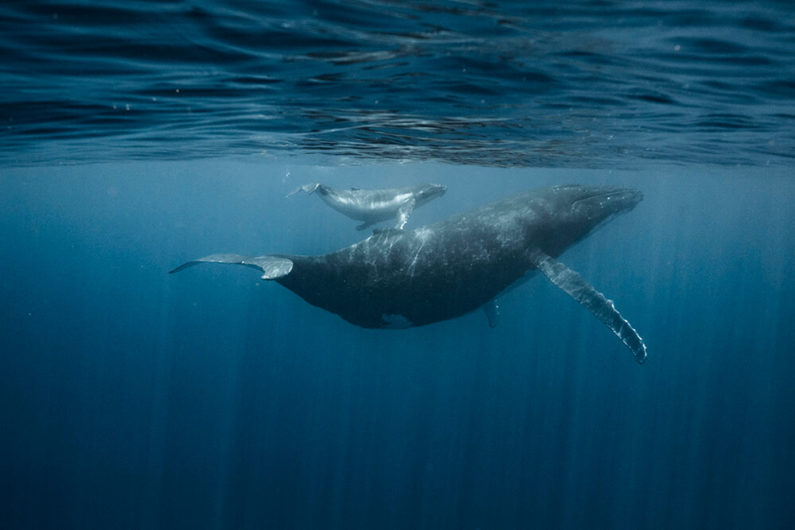