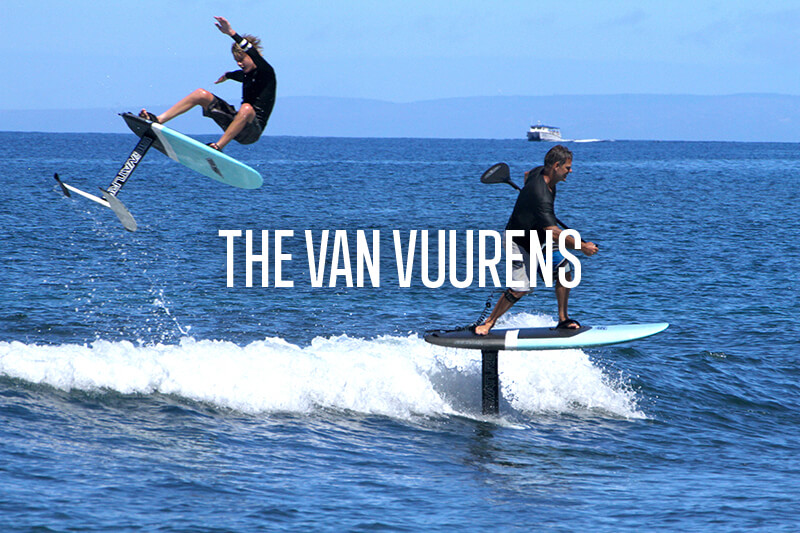 THE VAN VUURENS – A Foiling Family

Picture a beautiful early morning in Hawaii, warm trade winds starting to pick up as a father and his 4-year-old son load up boards for a surf on the south shore. Just another perfect day for this water-addicted family, not realizing that the foundations are being built for what would ultimately become the core ethos for future developments, designs and innovations for the family business they have yet to conceive…

The father, South African born Ivan van Vuuren – a professional watersport athlete who once represented his country, founder of several sports labels, board shaper, TV host and producer of many early windsurf, kite, Jaws and SUP movies – first arrived on Maui to compete in the early 80s. Falling in love with the tropics, he decided to leave the wild shores of Africa and relocate his entire life to set up a base in Hawaii, where his son Nathan was born, and where the first stirrings of their future working relationship began.

Fast forward 30 years later, and things have gone full circle, with a move back to South Africa and the birth and subsequent rise of one of the world’s most respected foil brands. Now Ivan and Nathan van Vuuren have become synonymous with the performance foil boarding market and their brand, Signature Performance Gear. Given this unique father-and-son dynamic to their business, we got in touch to find out how their working relationship plays out… 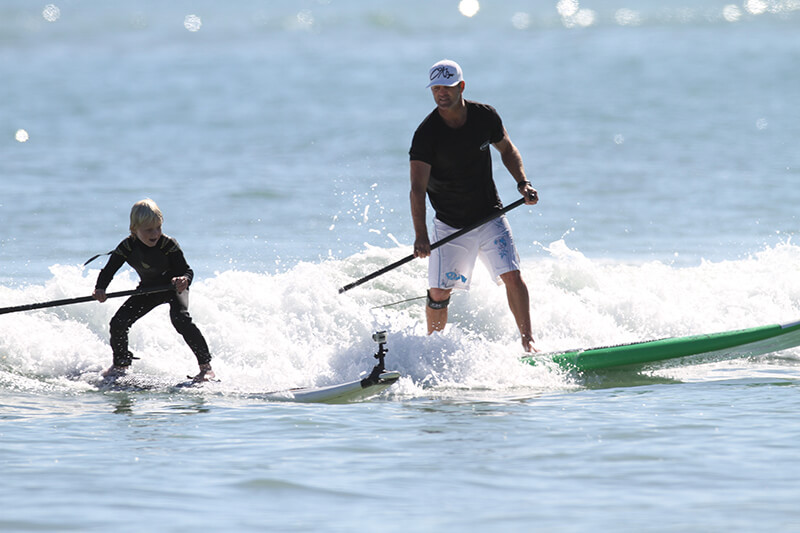 Nathan smashing out the quality media from a young age…

Born and raised on Maui and then later growing up on the west coast of South Africa, a treacherous coastline with cold waters, dangerous currents, gale force winds and ever-changing conditions, Nathan had the best start for a young waterman in the making. Having competed professionally for 20 years and been around the world’s top athletes, as myself and others looked at this kid, it was obvious from an early age that he not only had an above average balance ability but also a deep love and passion for riding boards of all shapes and sizes, which would ultimately morph into the sport we know as foil boarding. From the moment Nate stepped on a foil, he was hooked. He caught his first wave, stood up and flew as if he has been doing it for years. The attraction of so many of his favorite sports intermixed into one was almost as if a foil bug had bitten him.

As we look back over the last few years, we obviously see a natural talent that some kids just seem to have. But more than that, he showed a deep love to innovate, test and ride different set ups, assorted gear and was always thinking outside of the box, which still keeps him coming back for more. Whether it’s trying to connect 100+ waves without stopping, foiling with no fuse, downwinding using a surfboard fin for a tail wing or trying twin mast set ups, the kid’s brain is always onto something new and interesting which ultimately keeps him amped day after day.

As a family we were supportive first and foremost, to ensure the fun levels were high and that the stoke remained on fire without adding unnecessary pressures to compete or perform. Performance foil kit is generally a big expense for any family trying to provide the best competitive gear for their kids, and for us it really was no different. The challenge was that we were both so hooked we had to buy two sets of everything. I recall when we first started foiling and we only had one foil between the two of us, having to share it and how we had to wait for the other before we could use it. At times I even made Nate stay at home and do schoolwork so I could go out and enjoy the foiling without having to share my foil session with him…

We steadily began to realize his unique passion to innovate, so in 2013 started Signature as a surf and skate brand that Nate would ultimately head up. But after we both got totally hooked on foiling, we knew we had to add a new division to channel the ideas and concepts that were coming to mind – so Signature Foils was born and it was the perfect outlet for a young kid that eats, sleeps and dreams foiling.

I guess having the background of both competing with and filming the world’s top athletes has allowed me personally to have the privilege of experiencing what works both on and off the water. Whether it’s riding style that we document while filming during a training session, or how best to communicate with sponsors or customers, Nate has been fortunate enough to be at the right place at the right time to learn all this. Incorporating what he has been taught by so many athletes has no doubt helped him on and off the water, so it will be interesting to watch as he takes the sport to the next level, along with the others groms who are absolutely killing it.

Even though we have been a part of the different stages of foiling, we feel that these really are the early days and realize the best is still to come, with both foil gear and the people that will be a part of the history. Looking at what’s being done out there, we realize things are moving really fast and although Nathan may have some sporting abilities it is a fact that things can change overnight, with new heroes coming in the morning, so it is important to think longer term in between all the fun.

As a family business we love what we do, the sports products we produce are simply a by-product of our passion and a combination of input from the amazing designers, shapers and athletes that are as passionate about performance foil gear and the sport as we are. As the sport develops, and as does Nathan, along with these key people and all the new foil family members that we’ve yet to meet, we hope in the end to look back and have been a small part of the key ingredient that allowed riders around the world to enjoy the sport in one way or another. 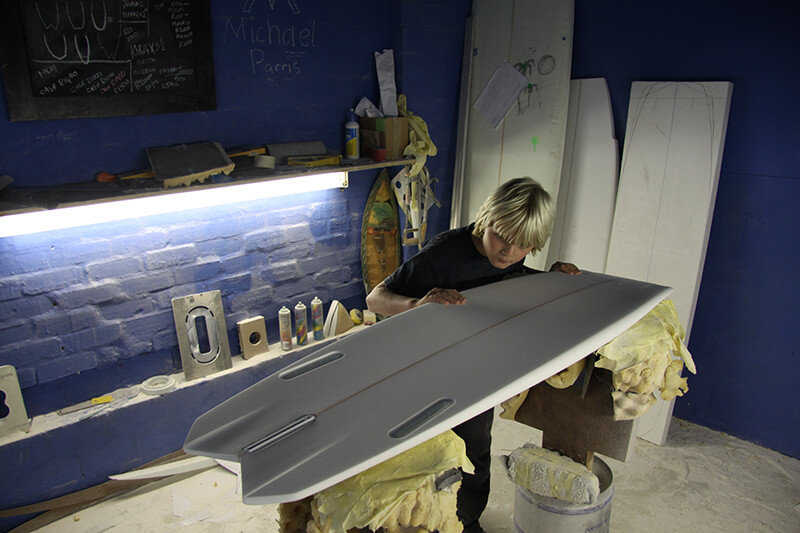 Every day is a school day.. 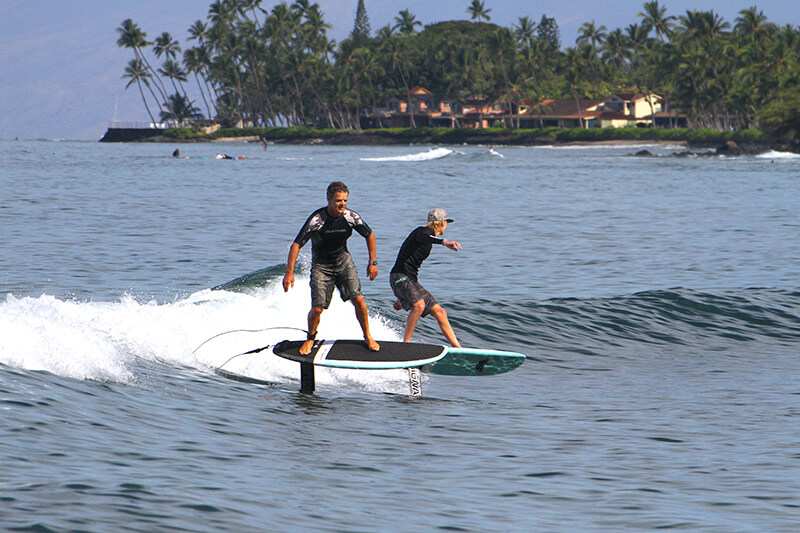 It’s been great having a dad that is as crazy about the ocean as I am. My first memories are of him holding my ankles while surfing together on Maui as a 4-year-old, and the great thing is that it hasn’t changed much. To this day, 14 years later, we still get to spend almost every day surfing, windsurfing, winging, foiling, or doing some type of watersport together – most times just having a load of fun, and as I have grown older there have also been a few more moments competing against each other, but in a good way.

I remember watching some of the early Maui videos that my dad filmed of the early foil pioneers, wondering what it must be like to fly above water. Then one day I had the chance to try it. The moment I got up on the foil and hovered above the water it was like no words could explain what I was feeling. A sense of surfing, but I was actually flying – it was totally surreal and it felt like a dream. Those early foil days were quite interesting. I was fortunate enough to pick up foiling from day one, and my dad took a few months to master it, so there were definitely some fun moments where, for once, I was better than him at something. But even with this, his water knowledge combined with his competing, filming and working with top athletes over the years allowed a lot of positive input in both my training and competing.

I was able to test and then give a lot of feedback to both my dad and also the designers we worked with. Obviously they had to translate what I was feeling as a young “foil frother” into a product that worked for a global market; so looking back I’m sure they must have had some interesting moments when they were trying to work out what this young kid was saying.

It’s been quite interesting that my dad places such high weight and value on my feedback. Sometimes it’s difficult to put into words what I’m feeling especially with so many variables that foiling offers, but somehow we have managed to get a combo that works quite uniquely, where I add my input and because my dad has shaped, designed, and tested for so many water sports over the years, he is able to translate, combine and add his input, allowing for a good final result. We’ve had the privilege of having some legends create boards, foils, wings and gear for us over the years and I guess having a personal input into some of the gear has made it that much more rewarding but also motivating to be able to test and then ride product that I have had a say in. There’s just something really cool about riding gear that you have had a part in creating.

Having a dad that has been in the sports industry for over 30 years but totally trusts and values my input has helped us establish a great relationship both on and off the water. We get to laugh, try new gear together, talk about how it works and then talk about what we feel needs adapting. And between his “old school” input and my new school thinking I think it creates a good combination for the end user. Looking at what’s currently going down and watching riders like Kai, the Spencer brothers and all the new kids around the world pushing the limits, we definitely want to go faster, fly higher and at the same time still create gear that makes it more accessible to a wider range of riders to enjoy this amazing sport. To do this we will keep trying new things, maybe not always getting it right but ultimately pushing the limits of what can be done.

I love dreaming and then shaping, creating or innovating. My dream, that I guess I am already living, is to be a part of a team that creates the best performance foil gear on the planet. I realize there are some amazing brands out there that have paid their dues and that it takes time and I can’t do it alone, so the way my dad initially established the Signature brand, incorporating designers, shapers and riders that have the same passion, along with learning the key factors that my dad and others have taught me over the years will hopefully lead to a story that can both encourage and influence other young people in years to come to live their dreams while enjoying life to the max. 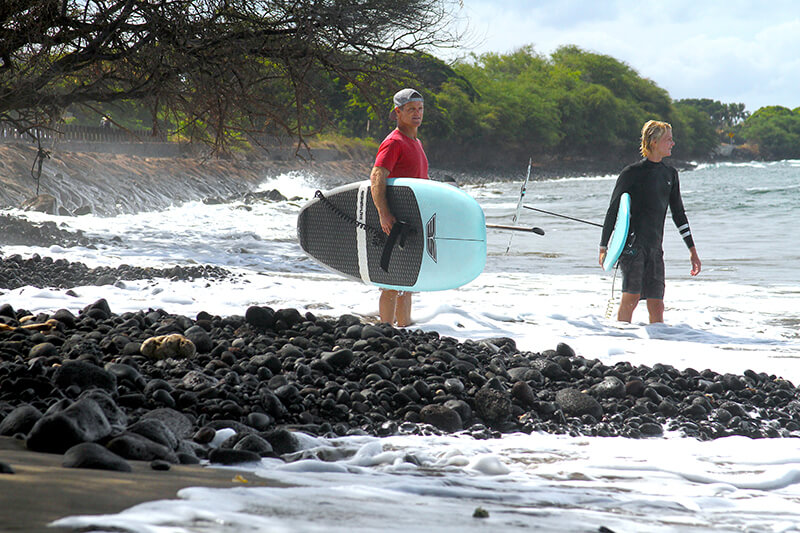 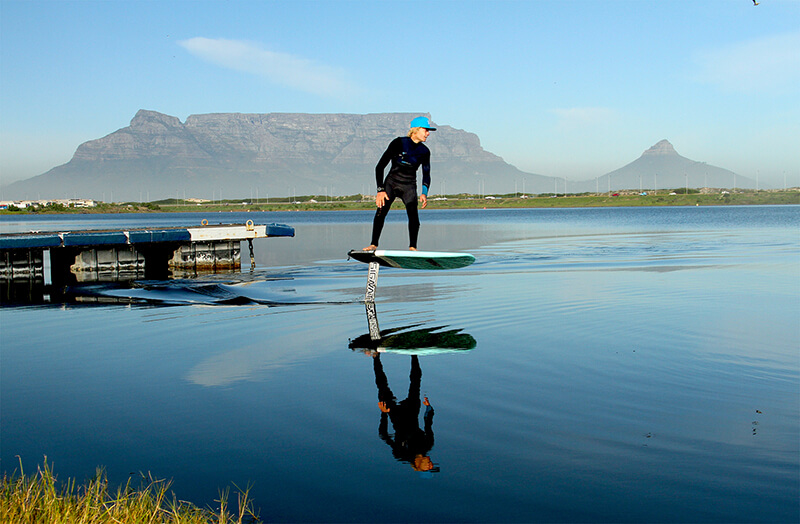 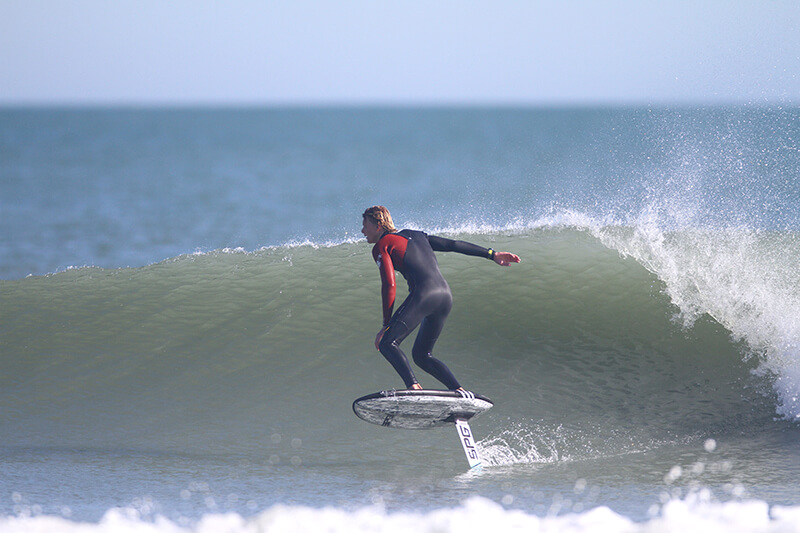 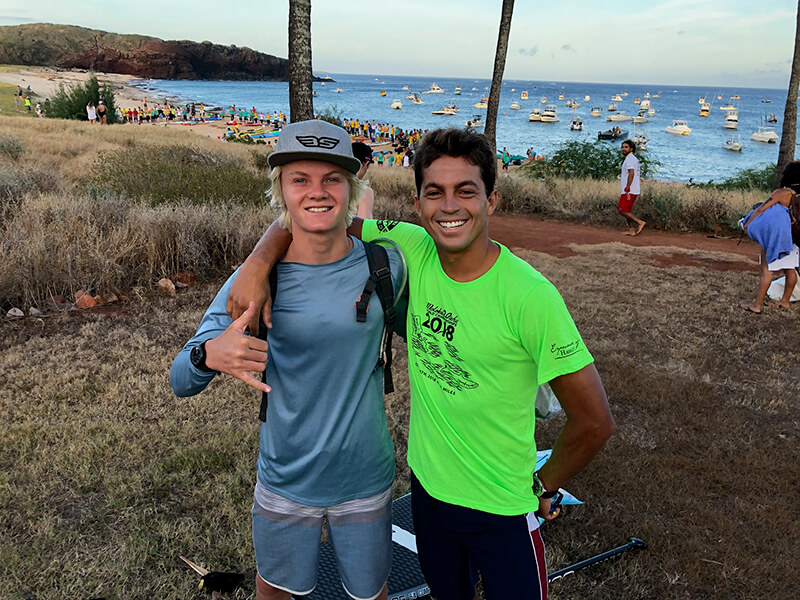 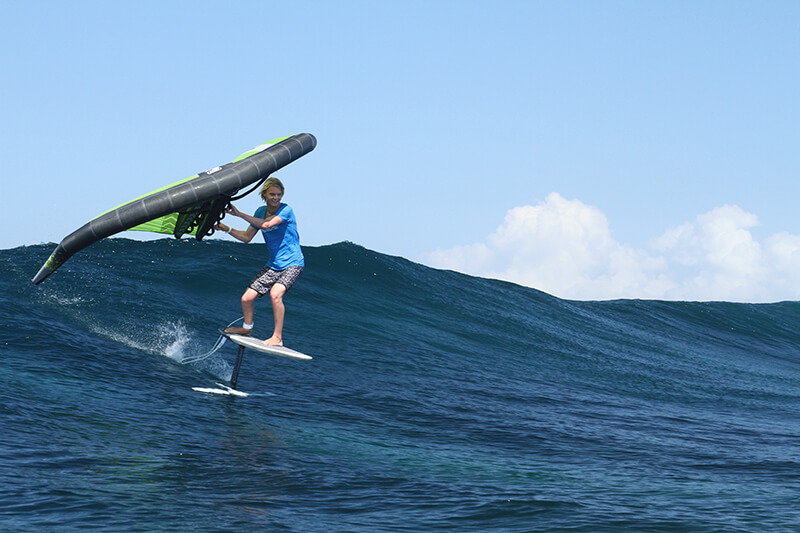 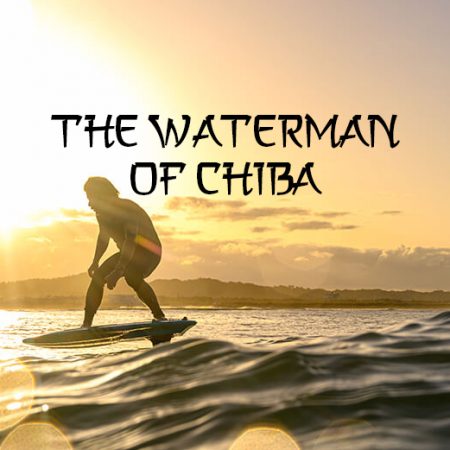 The Waterman of Chiba

You’d think that for most budding watermen who get to taste the limitless potential that Maui holds for such a career path, they’d probably end up just selling their return flight ticket and finding some way – any way – to stay put. 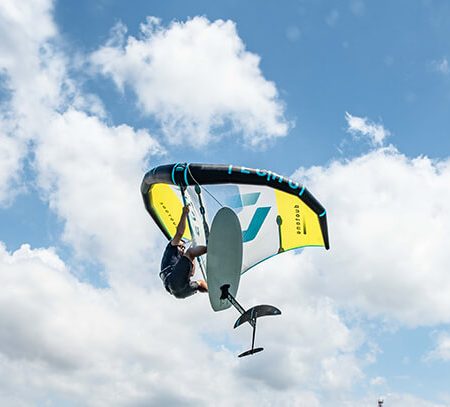 Roberto Veiga and Victor Adamo go on a wave-hunting adventure on the coast of Brazil... 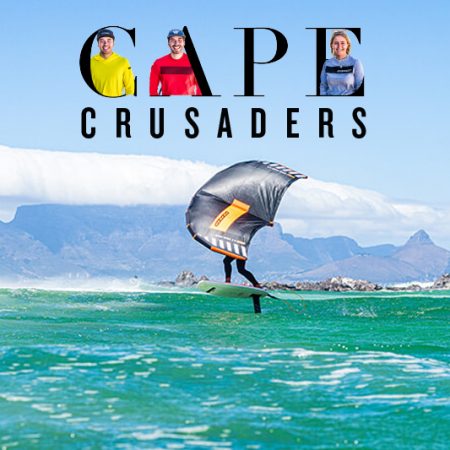