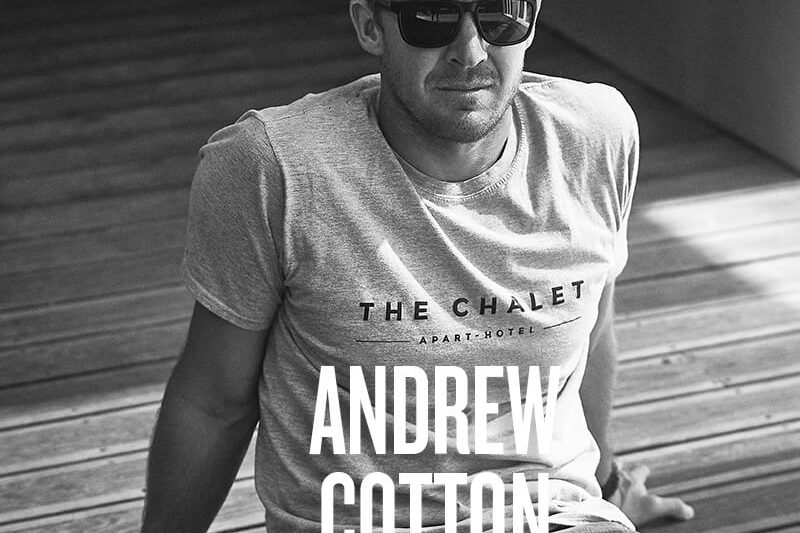 ANDREW COTTON – PROFILES OF THE PROS

As the European big wave season is now under way, the focus of the world shifts to one of the most infamous big wave spots on the planet, Nazaré in Portugal, where a hardcore international crew of chargers sit and wait patiently for big red, purple and black blobs to appear on the swell charts. There’s one rider who’s certainly paid his dues in this place, not least with his well-documented and very dramatic back injury which almost ended his big wave career. But now, he’s back, he’s in top form, and has been getting in plenty of foil action between the nuttier sized swells. 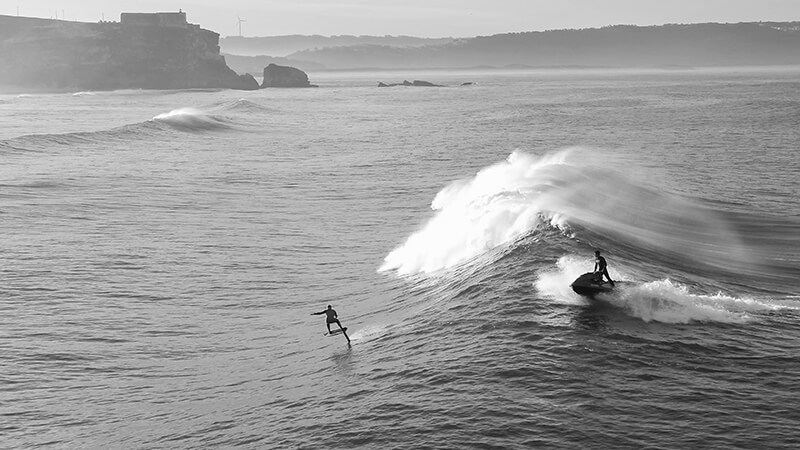 ▶ Hey Andrew, so first up tell us what made you first pick up a foil and how your first few sessions were?

Probably like most people I’d watched the likes of Laird then Kai flying effortlessly across waves and linking lumps of ocean energy and I definitely wanted a try. Unfortunately, reality hit hard and my first few sessions were non-starters: it was beyond me and I couldn’t believe how hard it was!

▶ It looks like you’ve used foiling as part of your rehab plan your recent back and knee injuries – what have you done to yourself?

Both injuries were from surfing, the back injury where I fractured my L2 vertebrae was at big Nazaré where I faded on a pretty solid section and misread the wave, I ended up bailing and the impact from the fall broke my back. The ACL injury was pretty much 12 months later at the Punta Galea Big Wave Challenge contest, I took off deep on a heavy section and just got clipped. It pushed me into my board and unfortunately my knee was the weakest link. Cue knee surgery and another solid stint of rehab!

▶ Ouch. So do you believe there are tangible benefits in rehab from foiling over regular surfing? Or is it just plain ol’ watertime hours?

The great thing about foiling or wake foiling behind the ski is that once you’re up and on the foil there’s no impact on the body, yet all the muscles are firing and working super hard. It’s a great way to get in the water and train without feeling like you’re actually training. You still have to put the hours in in the gym, but it’s definitely a great way to mix it up and keep it fun.

▶ Does injury anxiety sit on your mind despite all the planning and preparation?

Yeah of course it does, no-one wants to get injured and when you’re dealing with the unpredictability of the ocean and giant waves, the chances are pretty high. But to be 100% honest as soon as I’m in the sea actually surfing I don’t think about it at all. All those thoughts leave my mind, and I just focus on surfing and the moment. That’s the great thing about it.

▶ Have you taken the foil out in any ‘serious’ Nazaré swell yet? If not… think that’ll happen?

Not yet, although that was another motivation to start foiling, being able to ride giant ocean swells and waves without all the bumps and chop you experience on a normal tow board. I’ve got a big wave foil from Slingshot which is suitable but I’ve yet to properly test it at giant Nazaré. I’m sure it will happen though.

▶ Out of the Nazaré big wave riders, are there many others who’ve caught the foil bug? We have Rafael Tapia in this issue too who we know is one…

Yeah, pretty sure anyone who’s tried it is hooked. There’s Rafael, and there’s also Sebastian Steudtner who has been foiling loads, as has Maya Gabeira, Glynn Ovens…

▶ There’s some debate as to where surf foiling sits as it gets more and more popular and finds its place in the world. In issue #1, Caio Ibelli described as just a part of a “waterman” lifestyle, rather than something we should be looking at for tricks and competitiveness. What’s your take on where it sits and where it’s headed?

Wow, great question. I have no idea where it’s best placed and I totally get the concerns about foils in crowded line ups. I think Caio is right though, and maybe it’s part of the waterman lifestyle, although I know whoever takes the time to try it gets totally addicted and then adds one to their quiver! For me I’m no way near doing tricks, I can just about do a cutty but for me it just totally opens up options and maximizes water time, helping you keep fitter for when the waves are good.

▶ You’ve recently returned from a trip to Indo. How was that, and did you get any foil action while there?

Yeah Indo was epic, I haven’t been for years so was great to be back. I just took normal boards and left the foil at home, my main focus was to get paddle fit and the knee moving before the start of the Euro big wave season. Which I managed to do, so I was stoked.

▶ You have had a crack at foiling the Severn Bore in the UK. We’ve heard stories of people getting their foil caught up in tree roots… how was it for you?

The bore was epic, I spoke to a few locals before heading up and got their input. We ended up towing into a couple stretches of river where the bore surges more than breaks really, so the water is deeper. It was a really surreal experience and great fun, I definitely want to go back now I’m a bit more experienced.

▶ And you’re from North Devon, just down the road from the bore. That part of the Atlantic coastline is notoriously rugged. Do you get many opportunities to foil at home?

Yeah there’s a couple of great spots close to home, I often cheat and take the ski out and tow around the Bideford bar area. It’s out of the way and has some great waves to practice on but also Saunton Sands offers loads of space and good foiling waves to paddle into. You just have to walk down the beach a bit and find your own peak. 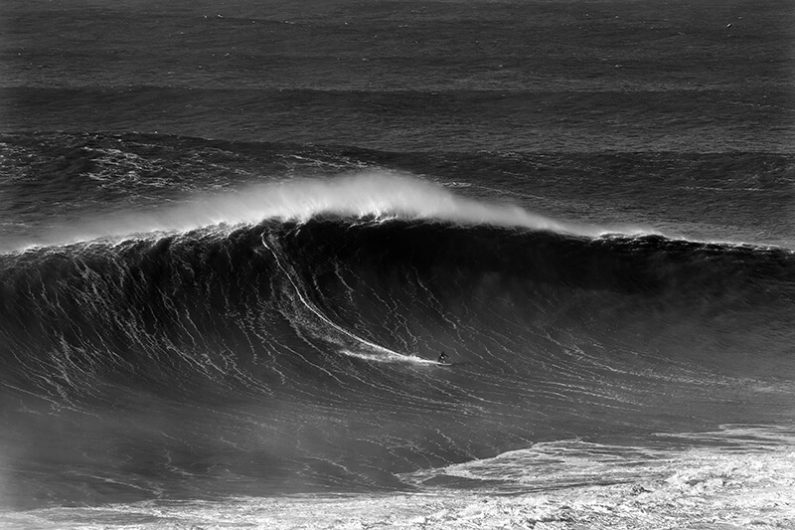 Cotty in the day job as he sweeps into another Nazaré bomb. This hasn't been done on a foil… yet. Photo: Hugo Silva / Red Bull 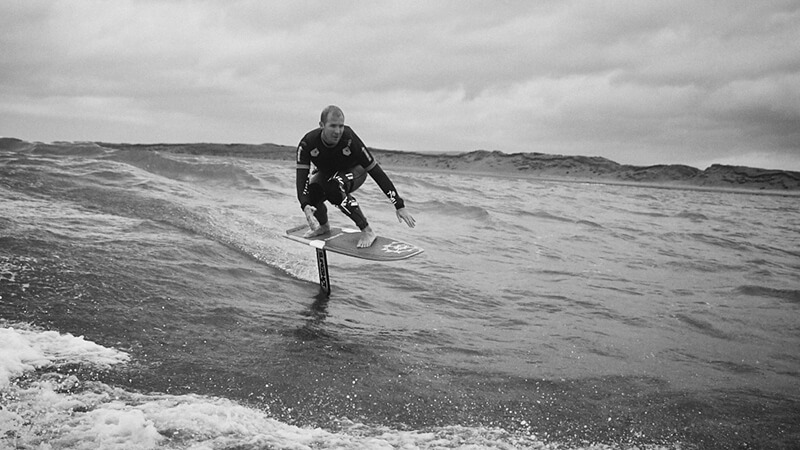 Back home in the UK, Andrew gets in some pre-Portugal practice. Photo: Andre Silva

▶ Does the scene seem to be growing in the UK? How’s it being received?

It’s still really limited at home, a few of my mates have got into it but only because we use the ski and I have the kit, I haven’t actually seen that many people paddle foiling at home although I know there are a few guys getting into it. Like anything new I think other surfers are wary of it, especially if they’re being used in crowed line ups and rightly so. It’s all about finding your own space and surfing the unsurfable.

▶ A surfer reads this interview and off the back of it goes foil shopping. What’s the first piece of Andrew Cotton advice to this person?

Give it time, speak to and get advice from as many different foilers as possible. If you have the possibility of learning behind a boat or ski first it might save you some frustrating sessions, but as soon as you get the first feeling of glide you’ll be hooked.

▶ And what are you up to now and over the next few months?

It’s the start of the big wave season so just keeping my eyes on the swell charts and keeping focused. Definitely be spending some time on the foil and keep my personal progression going. I’m hooked.