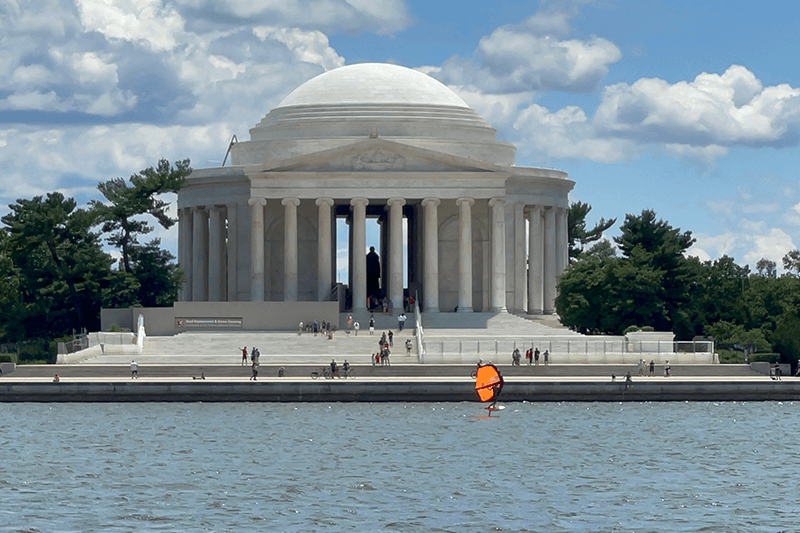 A change in scenery

Z Schettewi lives the dream on his home island of Maui, but island fever is a thing. He took a trip to the mainland for a bit of a change in scenery, and that’s exactly what he got…

Having spent the past eighteen months on Maui without leaving, my family and I decided to plan a summer trip to Alaska and the mainland. COVID-19 seemed to be under control (at the time) and we jumped at the chance to finally take a trip after months of lockdown. As we prepared to leave, I realized that my summer downwind foiling sessions on Maui and wing foiling would also come to a temporary halt. The idea of replacing this exhilaration with a completely different setting and activities left a void in my normal on the water time. Although I was excited, I knew that I would miss my watersports.

While packing, I had a revelation. I searched for my 5/4 full wetsuit and then packed my wing, board and foil gear. The possibility of getting on the water in a completely new setting made the trip seem even more exciting. 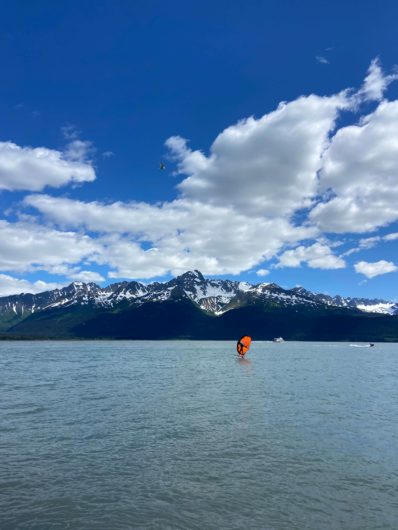 As soon as the plane descended into this spectacular backdrop, I began searching for this next water adventure. Upon arrival in Anchorage, we spent the first day getting our RV ready. I was able to safely store my equipment in one of the storage compartments, and we embarked on our trip driving along the Alaska Highway through picturesque mountains. When we arrived in Talkeetna near Denali, we boarded a 10 person de Havilland Otter plane for a flightseeing tour of Denali for an up close look at this majestic peak. Fortunately, the weather was perfectly clear and we landed on the spectacular Ruth Glacier. 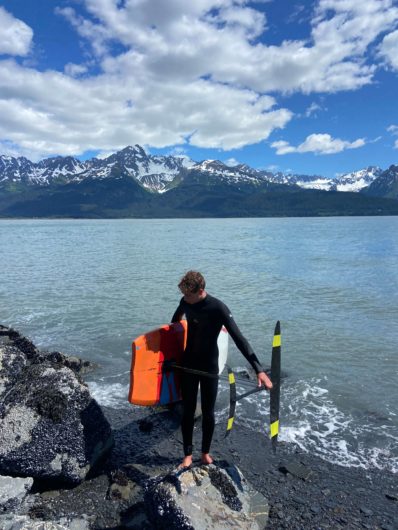 After heading out the Ruth Amphitheater, we spent the next few days hiking and fishing in Denali National Park, and then headed to the Kenai Peninsula. This next stop brought the possibility of some open water for a potential foiling session. En route, we drove past the Turnagain Arm, a long, narrow body of water near Anchorage known for its bore tides. This rare phenomenon occurs when tides collide, creating long-traveling waves as tall as 10 feet, with speeds of up to 15 mph.  Unfortunately, we did not hit it at the right time. I plan to come back and catch this tide.

We then headed south in the Kenai Peninsula and we stopped at Cooper’s Landing.  Relying on local knowledge and guidance, we learned some tricks to  catch sockeye salmon. Foiling was not possible as the rivers were too narrow and the currents were very strong.

Traveling further south in the Peninsula we stopped in Homer, the southern tip of the Peninsula, for a deep sea halibut fishing trip. This open water with snow covered mountains in the background would have provided the perfect foil board backdrop. Just needed a few gusts of wind.

Next stop, we arrived in Whittier for a small private boat ride to the glaciers. Captain Jason let me bring my board, wing and foil and we were all hoping for some wind. As we approached the first glacier, the wind was perfect. I donned my 5/4 wetsuit as the water temperature fell below 50 degrees, pumped up my 5 meter wing and hopped off the boat onto my board. I cruised in these icy conditions close to this mammoth mass of ice. I knew that falling wasn’t the ideal option, and I managed to stay on my board and continue foiling in front of this breathtaking scenery. I enjoyed the game of maneuvering around the countless chunks of ice in the water. While circling the boat, I felt the exhilaration of foiling once again. When foiling in Maui, I often feel completely immersed in nature, but this time I was immersed in a completely different setting — I was foiling in an ancient fjord surrounded by miles of glaciers.

Our next stop was Seward, Alaska and we parked our RV right in front of Mt. Alice and the Godwin Glacier. The wind cooperated, and I rigged my gear and began to wing foil in Resurrection Bay. The water temperature was more forgiving than the fjord and I enjoyed exploring this spectacular bay. This had finally completed my Alaskan experience, and I was elated to have finally experienced winging in a totally different natural environment.

We left Alaska and headed to Washington, DC to visit family and friends. On July 3rd (just before Independence Day), we loaded my gear on the roof of the car hoping to foil in the Tidal Basin in front of the Jefferson Memorial. When we arrived the wind was blowing about 8-10 mph. The challenge was making sure I could find an accessible launch. We looked up the rules and it seemed fine so I picked a spot which was relatively easy to launch. As I was about to get in the water, a park ranger came running down as he was not sure if this was allowed. Perhaps he had never seen a wing and foil, and he gave us a reluctant thumbs up. He nodded and said with a smile, “go ahead.”  Immediately, I hopped on my board and wing foiled through this historic basin overlooking the national memorials. Spectators stopped and stared. While foiling I had a clear view of the Washington Monument and remembered watching firework displays there with my family as a child. After a few runs, a small, private boat let me know the basin was reserved for small rented paddle boats and asked me to stop. Although I wanted to continue, I reluctantly foiled back to the edge of the basin.  While walking back to the car carrying my gear, people began to stop and ask about my equipment. Many had never seen a wing or a foil, and they surely never saw one in Washington, DC. 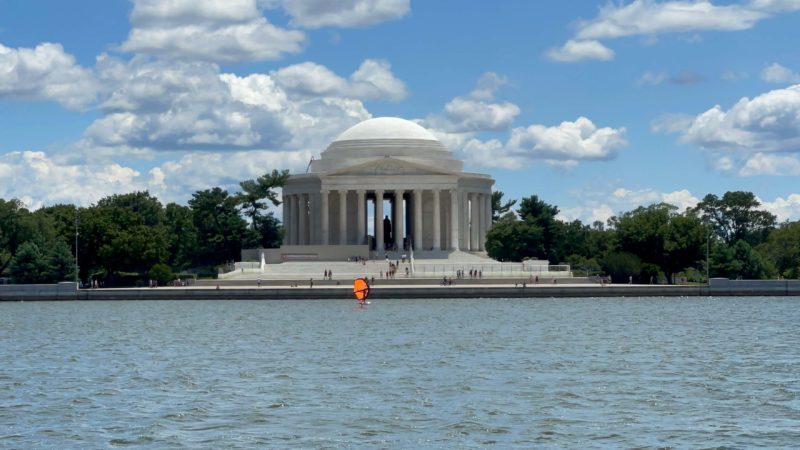 The decision to bring my gear with an open mind was well worth the effort. The experience of wing foiling in these different venues created memorable experiences. Anyone traveling to places where a foiling opportunity may present itself should definitely pack up and bring their gear. You just never know when it happens, and it’s a big bonus to any trip. So, remember to pack it up and enjoy! 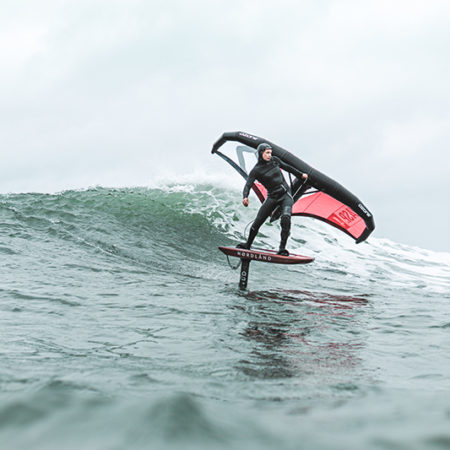 Here’s one to get under a warm blanket for… Desperate to score some adventure time and seek out some empty waves, KOLD’s Mario Rodwald and a few friends leaped across the Danish border at the first opportunity, and went wind and wave hunting, enveloped in suitably thick neoprene… Words: Mario Rodwald Photos: Lauritz Kuntscher & 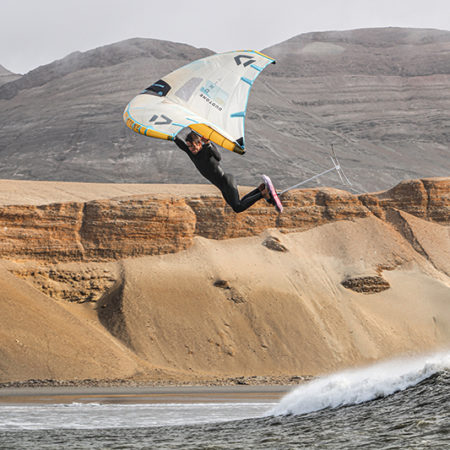 If your plan is to escape the crowds of one of the world’s busiest water sport locations, then heading to deepest Peru is a pretty sure bet for scoring some isolated water time and world class wing conditions. And don’t forget to visit the jungle… Words: Jerome Cloetens Photos: Giancarlo Escobedo Flores The land of 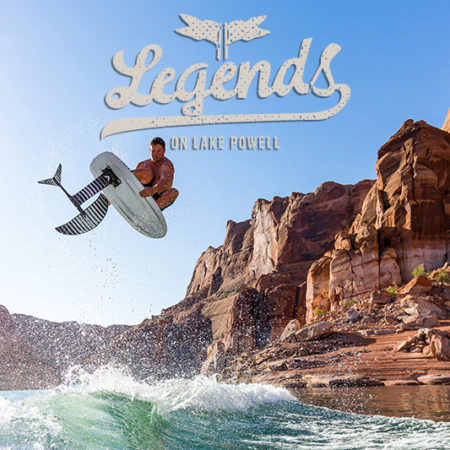 A gathering together of some of the biggest names in both wake and sit-down foiling took place on Lake Powell in the summer, to share notes, foment ideas and, most importantly, have an absolute blast... We've got the story from those who attended.