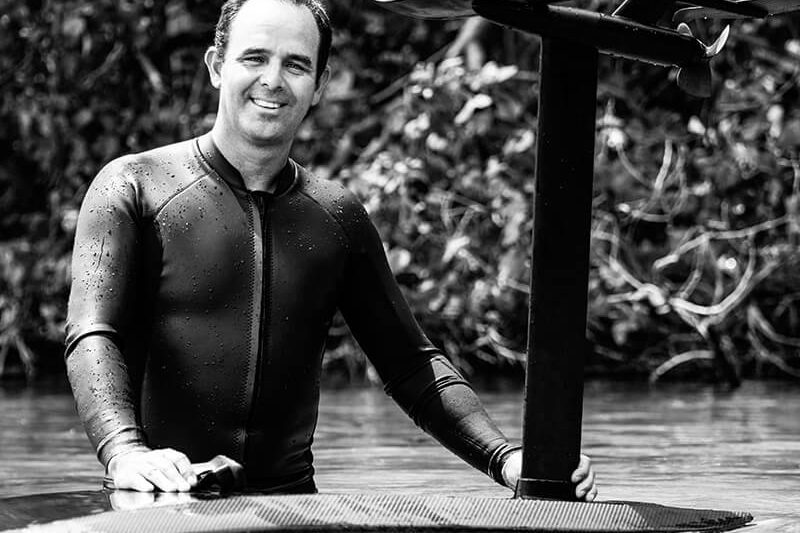 The Wizard of Merimbula

Not so long ago, many unfortunate individuals were sent to their maker for doing little more than owning a mildly suspicious-looking black cat. So imagine how the local village elders would have reacted to the sight of Fliteboard founder David Trewern gliding around the local lake on one of his high profile premium products… We think it’s safe to say he’d be up on a hot stake in no time.

Luckily for David (and all eFoil riders generally) we’ve moved on a bit since then, and the potential for gliding around open oceans and inland waterways is becoming increasingly accessible thanks to the likes of Fliteboard, part of the vanguard in new electric foiling. We sought out the story from the man behind the black magic…

Since he was a grommet growing up in Merimbula Australia, Fliteboard founder David Trewern has been obsessed with surf sports. Surf, windsurf, kite, SUP, foil; he’s had a crack at them all, and way back in 2005, the now 47-year-old was the GPS kitesurfing world record speed holder with a 500m average speed of 44.8knots. David even visited Richard Branson at Necker Island in 2015 where he showed off his kitefoiling skills to the bearded entrepreneur. It was around this time that the eFoil idea struck him. “I was at an event with no wind, and a simple idea struck me: ‘What if I could attach a motor to my kitefoil board?’”

With a background in design and passion for engineering, David realized an opportunity when he saw one, visualizing something he could bring to the world that would be in the mold of Porsche, Apple and Tesla. He was resolute… “I decided that if I was going to do this I was going to go all out, and create the product that I would want to buy.” Fliteboard was born.

From that point, David arced onto a steep learning curve to get the first prototype flying. He taught himself CAD, bought a 3D printer from ALDI and made his own parts, learning about batteries, electric motors, propellers, sealing and electronics on the fly. “There were no benchmarks for what I was trying to do, so there was endless trial and error. With a mix of custom and off-the-shelf parts I finally got a prototype working. After the first ride, I knew this was something very special.”

The first prototype cost about $20,000 to build. David then assembled a team of industrial designers, hydrodynamicists, electronics and software engineers and battery experts. The second (and vastly more sophisticated) prototype cost about $2 million. But David admits there was still a long way to go. After all, creating a new product from scratch was never going to be easy. Although a Fliteboard looks simple and might be simple to use, under the surface there are hundreds of custom parts, premium materials and components… “Once I got a system working, there were constant challenges of dealing with temperature, sealing, pressure and corrosion. We had to invent new ways of doing things to create a product that would exceed people’s expectations, justify the price tag, and last for years in the harshest environment on earth: the sea.” 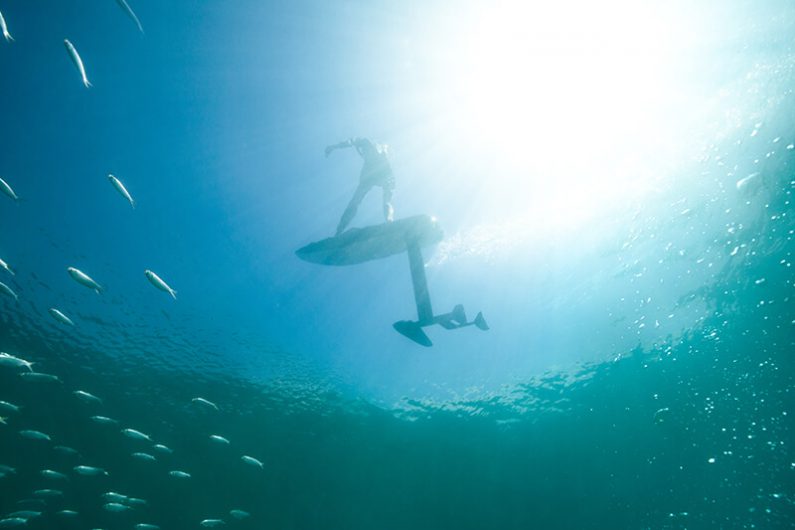 The real magic happens beneath the surface…Photo: Jennifer Stenglein

The development project took about three years from the original idea to production, with teams across Australia, Thailand, the USA and China working around the clock. David insisted on the motor being inside the fuselage for less drag, more efficiency and balance. But making such a system strong, light and waterproof meant creating a custom extrusion then post machining from a large block of aluminum. Each motor housing required six hours of machine time to create.

Fliteboard’s wings then also utilize several custom sections and went through months of parametric design and iteration, with digital wind tunnel and tank testing. David admits the process was a constant challenge. Fliteboard has dozens of custom designed components that all needed to be run as their own project and which all presented their own issues for David and the team. He explains, “Something as simple as the board lid and sealing system went through around 15 iterations before we got it right. We thought we had the motor pod sealed, and then found that three months later it would fail. We had unexplained battery cutouts that required endless tests riding at top speed until the moment of a sudden shutoff, with logging equipment attached. I was often the crash test dummy!” In total, seven different battery designs were developed to advanced prototype stage, until David and his team were satisfied with their production battery.

The entire project took David and the team lot of self-belief and perseverance, not to mention investment… “At times it was a struggle to see light at the end of the tunnel, and to maintain belief that all of this work would come together to form the perfect experience that we were seeking to create.” But the finished product is now out there for everyone to see (and fly) and it has already won major design awards in Australia, the USA and Germany. 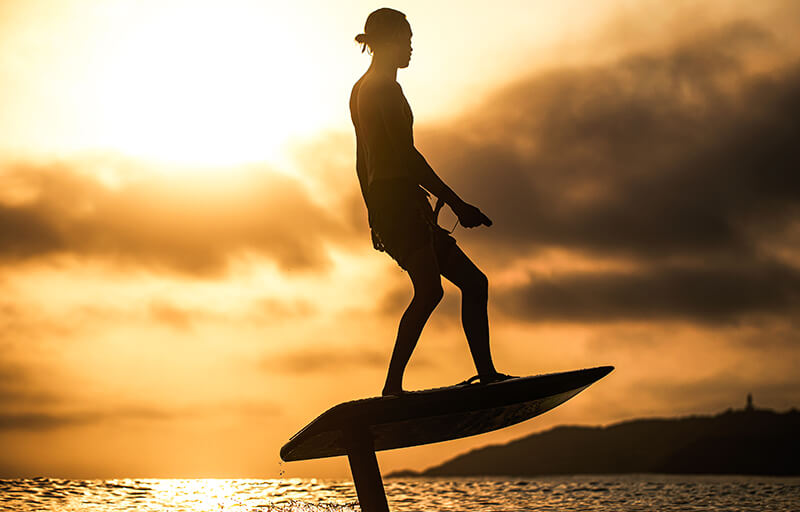 Since May, 500 Fliteboards have been shipped to customers in over 30 countries. Despite its sophisticated appearance, it’s not hard to master. People with little watersports experience can start ‘flying’ within an hour with proper coaching, and professional watermen like Keahi de Aboitz and Laird Hamilton also expressed surprise at just how easy it was to pick up. David says he gets out and rides his Fliteboard at least three or four times per week, encouraging everyone on his team to do the same, “Foiling offers that feeling of presence in nature, with time standing still. Everything is in perfect balance, yet you are on the edge of control, so there is an adrenalin factor. To be able to do this continuously for an hour and a half on a Fliteboard is quite magical. It’s both serene and exciting at the same time.”

Like any electric vehicle, eFoils are not cheap to build, and a water-based vehicle needs more power than a road-based vehicle, while the strength, weight, waterproofing and corrosion challenges bring their own reasons to make sure the materials involved are of high quality. Unsurprisingly, Fliteboard has a lot of customers for whom the price tag is not such a concern. Fliteboards have been delivered to over a dozen billionaires, oligarchs and even the odd member of royalty. “The most magical gadget on the planet” is how Tobias Lukte, the founder of Shopify, described his Fliteboard.

But David is quick to point out that it’s not just for the elite… “Yes, we have a lot of superyacht customers, but we also have plenty of customers who are just total frothers, who love having a new way to get out on the water without needing a boat or ski to tow them. We have a local guy who paid us in monthly cash instalments before delivery of his board and we have a night-shift worker in Germany who Fliteboards (and sleeps) by day. There are people here in Byron Bay who are out exploring new breaks almost daily on their boards.”

Fliteboard into the future

The boundaries for eFoiling are already being expanded, not least by the boss himself, and his team. “We’ve had a couple of race events which are great fun,” says David. “Some of our team have been experimenting with strapped freestyle in the surf, backflipping off waves and trying other tricks. I spend most of my time riding a mellow local point break, getting back to back 700m rides.”

And to the present: David says right now the team are working hard to keep up with an increasing demand. They have an app launching soon, and – you heard it here first – there are plans afoot to make a more accessibly priced product, which David maintains will employ new ideas rather than scrimping on quality, “We have had such amazing feedback about Fliteboard. The riding experience will continue to evolve for our customers via software updates over the next 12-18 months. We are also excited about the possibilities of expanding our range to include an even more premium model in the future, and further down the track – a higher volume model that employs new ideas to allow for a quality experience at a lower price point. These new models will sit alongside our core Fliteboard product.” 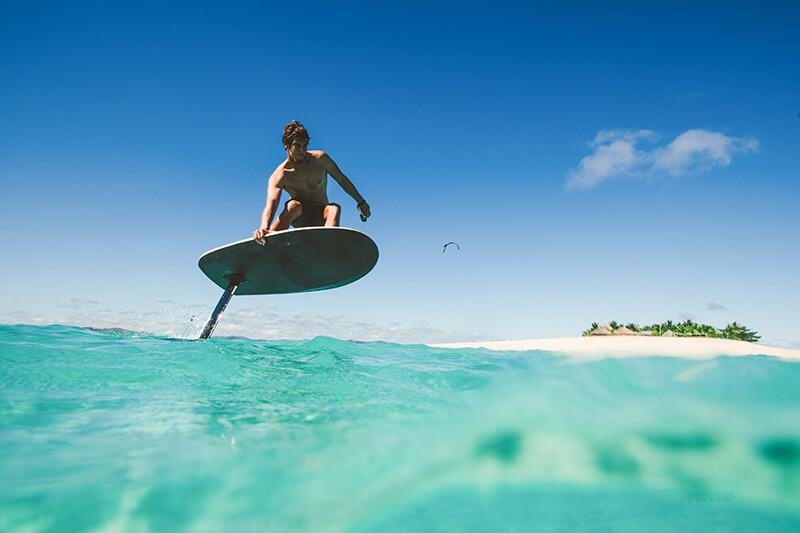 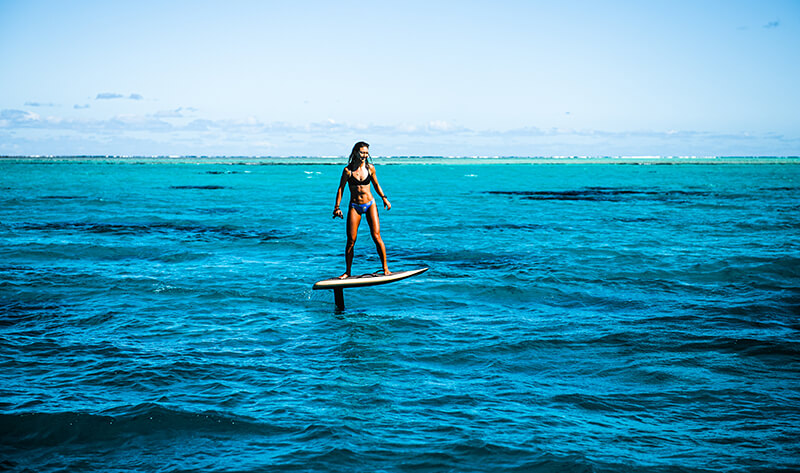