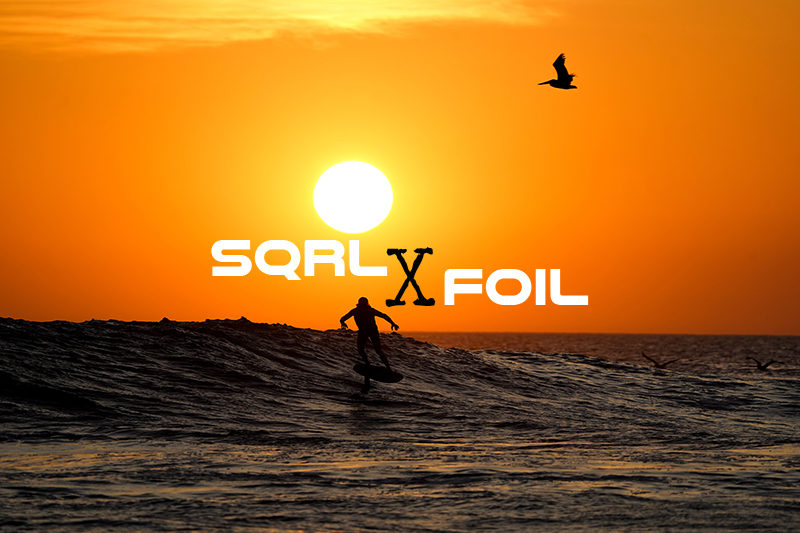 Sure, at first glance there may not seem to be any immediate connection between getting towed into Central American bombs on a foil, and jumping out of planes or off some of the world’s highest cliffs with just a wingsuit and parachute preventing you from an early rendezvous with your maker. But Matt Gerdes, chief test pilot and co-designer of Squirrel Wingsuits, sees the world a little differently to most of us… both literally and figuratively.

“Kook”, the surfer muttered as I zipped past at 30mph, my tail wing singing like a tin roof in a windstorm.

The lone grumpy surfer had, for some reason, made the effort to paddle 300 yards out to a wave that was breaking so briefly that it was barely surfable. But it was an insane foil wave – slowly morphing from swell to lump to ramp over the course of a few hundred meters before breaking, and we’d been sessioning it for an hour – Lance and James slinging us into the first perceptible bump as the swell surged onto the leading edge of the reef, dodging the boils as it steepened and pitched momentarily, exploding and reforming as a slopey right with a fun inside section. It was the sort of wave that surfers look at from shore and think, shit that would be amazing if only you could ride it for longer – and here we were, two skis and the six of us, getting almost half-mile rides from beyond the reef almost to shore, and letting not a single set go by. It seemed pretty obvious that the guy was trying to prove a point, but it wasn’t working. When Lance came to grab us in the channel, I said “hey, that guy seems pretty bent, are we all good here?”

Lance chuckled, “yeah, we’re good. That guy rips off religious charities for a living and just sits down here and drinks beer. Don’t worry about him.” 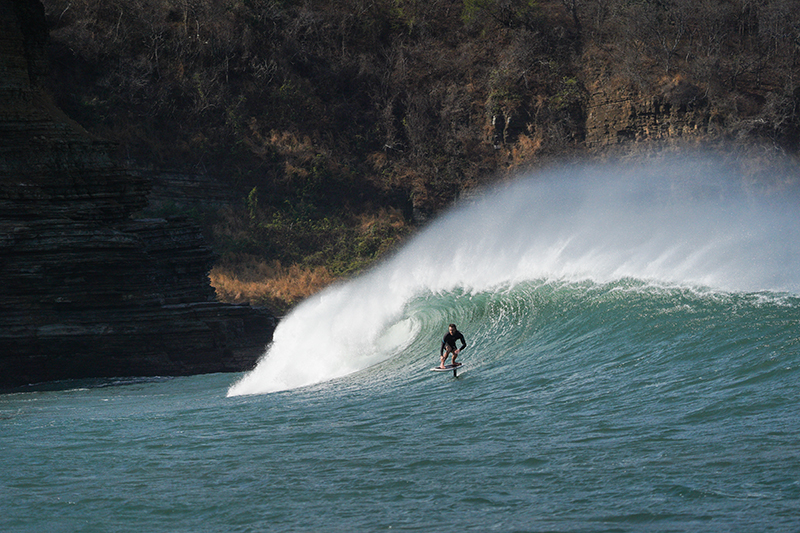 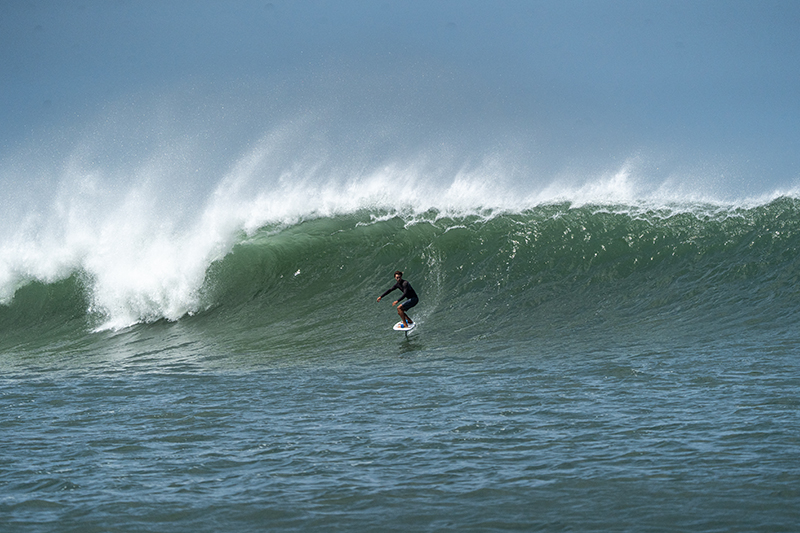 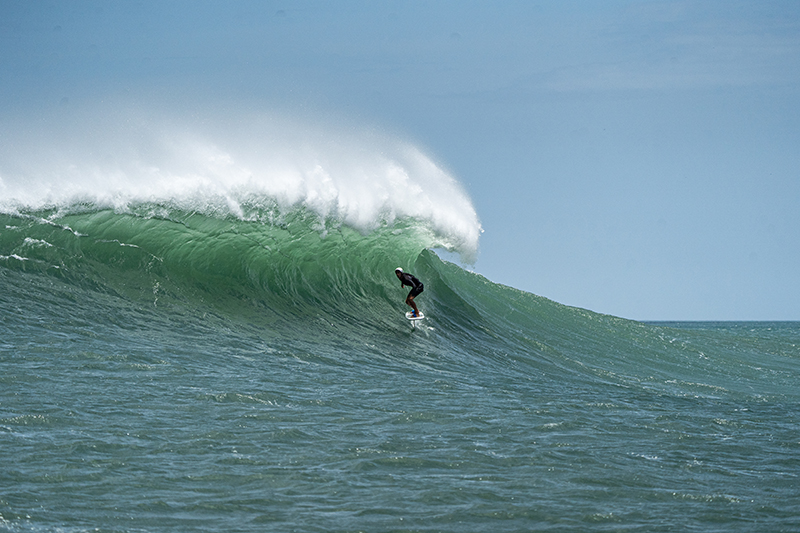 Lance knows. He knows Central America, after guiding in this zone of the Pacific coast for more than two decades. And Lance knows foiling. He knows where to be, and when, and how to put you on a wave. It was our first day with him and his crew and each of us had already gotten about eighty waves and it wasn’t even close to sunset. We were a bit of a high-maintenance crew, for sure, having asked Lance for a sunrise start and a sunset finish so that we could make the most of the week, not fully realizing that this would mean he and his staff would have to set their alarms for 2:45am, making our 4:30 alarm seem relatively chill. When I blended my heartfelt thanks with an apology for this at the end of the week, Lance laughed and said, “I’m a stokebroker, this is what I live for and I freaking love seeing you guys get after it so hard”. I believed him. Lance’s stoke is real.

In early 2021, as Covid was winding down in most of the world but tourism was still shaky worldwide, Lance and his longtime friend and surf-guide protégé, James Jenkins, sketched out an idea together: The world’s first surf foiling expedition charter. The charter part was dialed – Lance has been running Surfari Charters since 2001 and has no trouble booking out every single available week of the season, sometimes years in advance. He and his partners are not short of experience, or business. The hard part was the jet skis. While pangas, yachts, and charter vessels are never far from the world’s best waves, jet skis are another matter. But Lance is a highly driven and resourceful person, and James has energy to spare – that, combined with a global network of friends in the surf charter business, has made Foil X Global a reality. 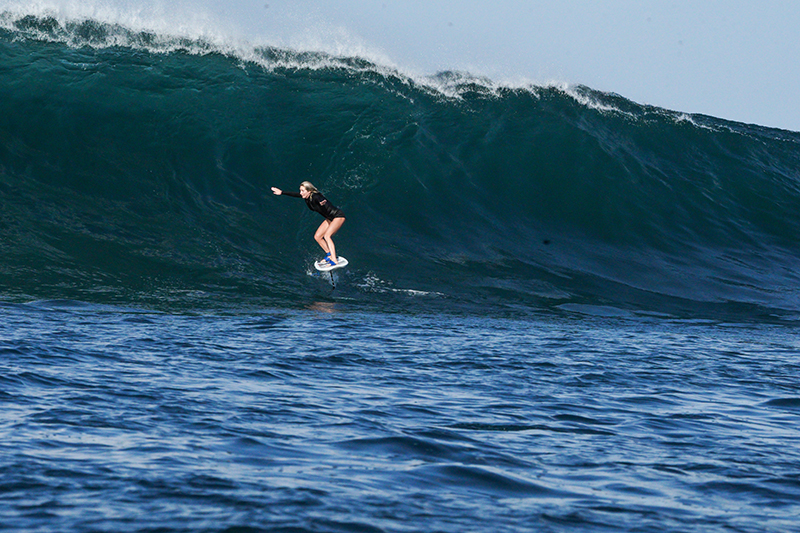 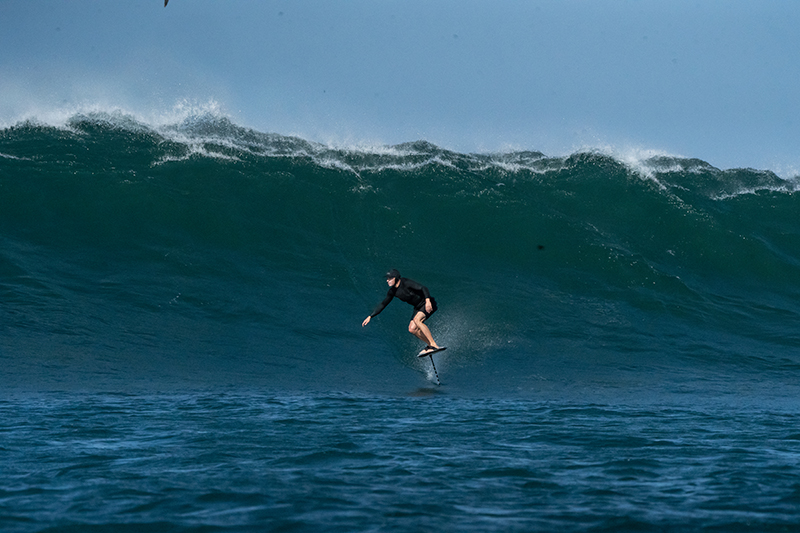 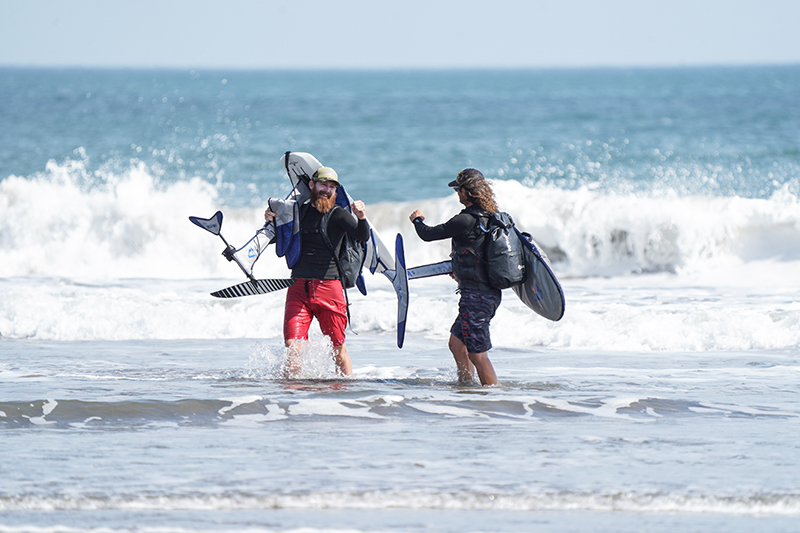 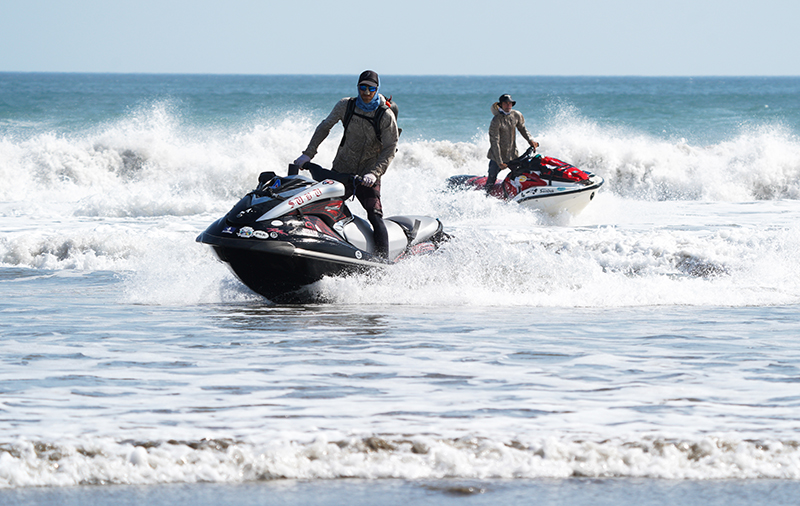 Did I mention that we were catching a lot of waves? Counting the double and triple dips that some of us were snagging on the inside sections, we were averaging close to 100 waves per day, each. With two skis and six of us in the water, not a set went by unridden at any spot Lance took us to. By day three, James was shaking his head, claiming that we’d already caught more waves each than he had in the past two years of foiling. We were gluttons, maxing the days we had here with the knowledge that soon we’d be back to the grind with no swell in sight. You’re going to love this detail, and feel free to laugh, but none of us consider ourselves to be real surfers. The only thing we have in common, actually, is wingsuits.

Foiling is flying. As wingsuit pilots, BASE jumpers, and skydivers, we know flying. All of us have lived with a “do or die” relationship to energy retention, glide performance, stall speed, and maneuverability for the past nearly twenty years of our lives. A few of us had caught some waves on surfboards before, or wake-surfed, but when we began foiling not long ago, we were fascinated by the art of flight more than anything. Air is a fluid, and every single aerodynamic principle that matters translates directly to foils. Aspect ratio, profile thickness, anhedral, sweep, you name it. The suits and parachutes that we fly and the way we move through the air are perfectly analogous to foiling – and we were all instantly hooked. Last summer our group put over 200 hours on a wake boat, turning circles around a tiny lake in the Pacific Northwest. We taught ourselves how to pump, how to ride the second wake, then the tenth wake, then every part of every bump the boat created as it turned, non-stop, around the lake. It was, of course, not enough. Soon we were poaching freighter, yacht, and cruise ship wakes in the Puget Sound near Seattle. Not long after, we were towing into our first waves off the coast of WA state with a borrowed jet ski, and we even managed to spend a few days with fellow wingsuit pilot, Niccolo Porcella, on the North Shore of Maui. But there is nowhere on earth that you can catch as many waves in one day as you can with Lance and James. 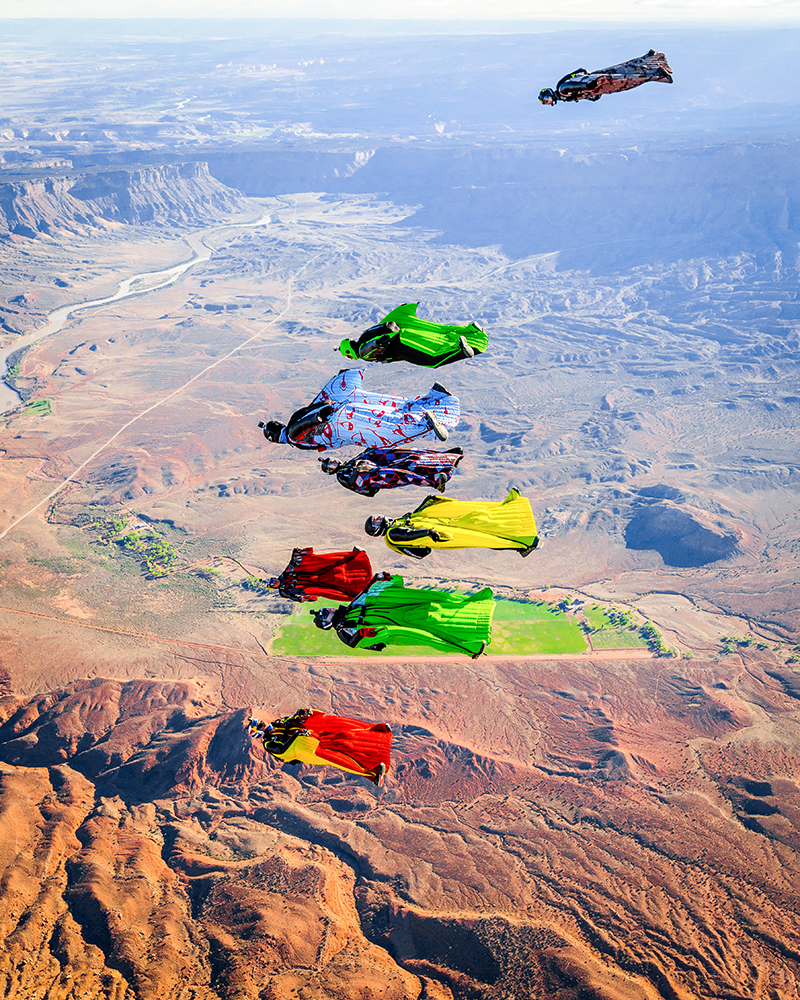 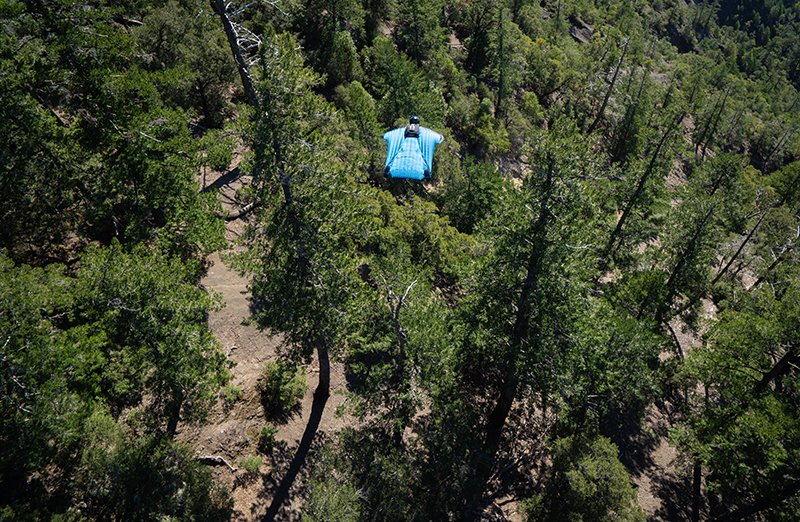 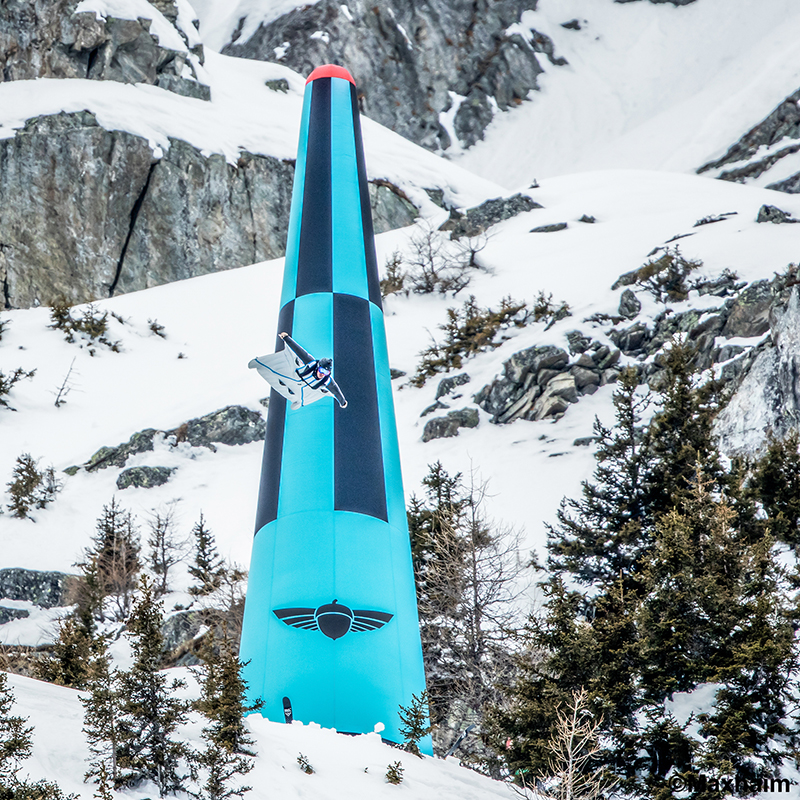 As the swell built during the week, our rides went from surviving to thriving and we started to make better use of the waves. Scott Palmer, one of the world’s best skydivers and a longtime instructor, BASE jumper, and wingsuit pilot, is from Idaho. Before hooking up with Foil X Global, he had never caught a decent wave in his life. That didn’t stop Idaho boy from catching a few double overhead set waves. Nic Sacco, a professional race car driver and heli pilot from South Africa who has never touched a surfboard in his life, caught a few house-sized bombs and was triple dipping waves on the inside flying his Armstrong HA725.

The irony of tow foiling – that it’s incredibly difficult at first, but then quickly becomes ridiculously easy – was not lost on any of us. We were overcome with gratitude and at no point did we feel like we really deserved to be riding waves that most surfers spend a lifetime to reach… and riding waves like that by the dozen, day after day. Sure, we’d put in the work over the summer and most of us could pump for nearly a thousand meters in flat water by the end of last summer, but we never lost sight of the fact that modern foils are so technically advanced as to be practically magic. It’s an incredible time to be alive. 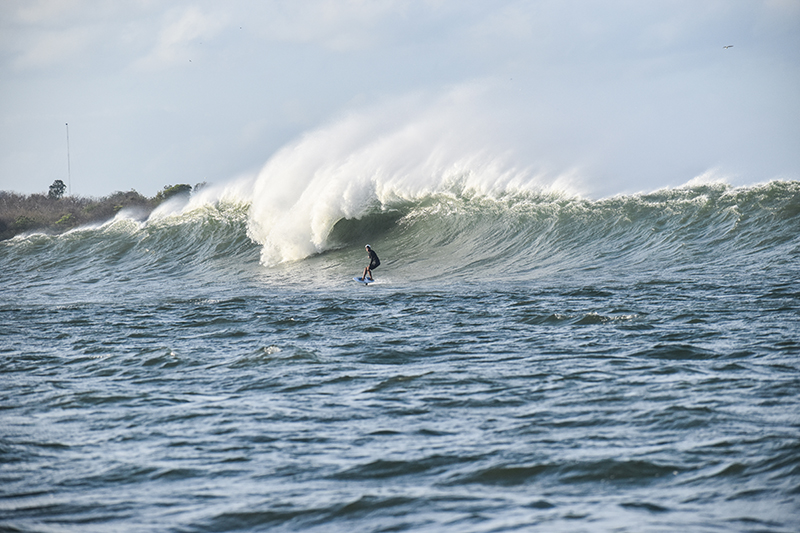 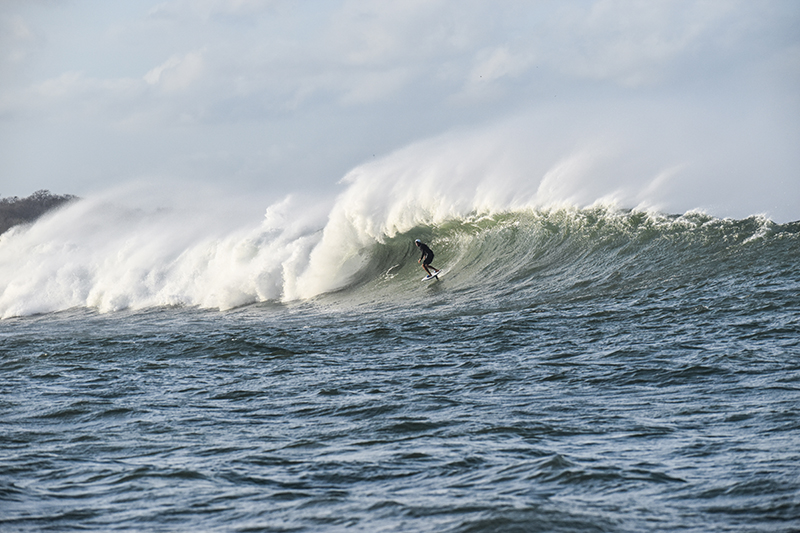 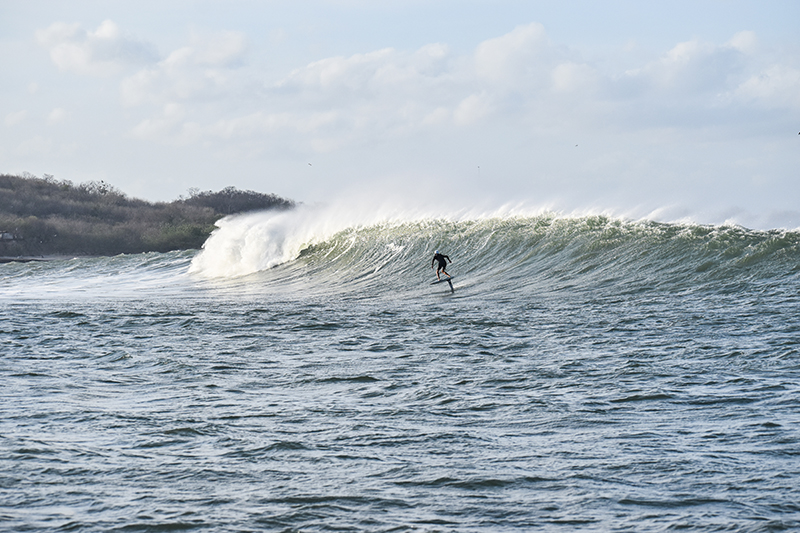 As newcomers, we asked Lance, “what do you think the future holds for foiling – if we can do this, anyone can, and as soon as people realize how insane this is then it’s bound to blow up. What do you see happening?”. Lance acknowledged that while the explosion seems imminent, “there are way more foiling waves than there are surfing waves. For every popular or even known surf wave, there’s ten foil waves out there that have never been ridden by anyone on a surfboard and probably never will.”

Therefore any conflict, for now, seems to be mostly in the grumpy surfer’s head… 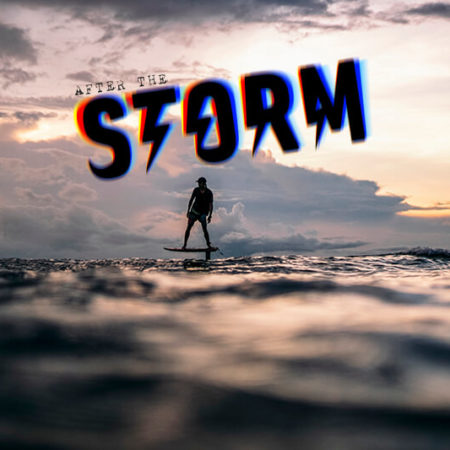 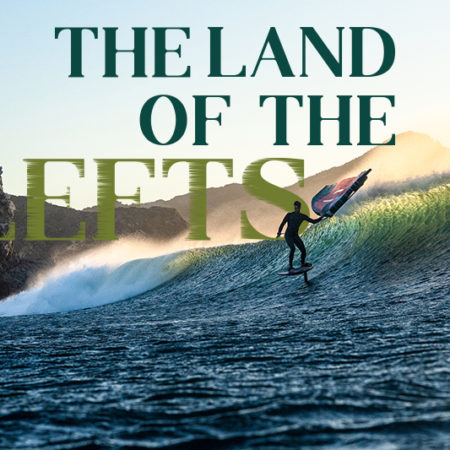 Isolated islands, windswept point breaks, and some of the longest left-handers on the planet… For Stefan Spiessberger and friends, Chile's dusty corners quickly became a wingfoiling Shangri-La 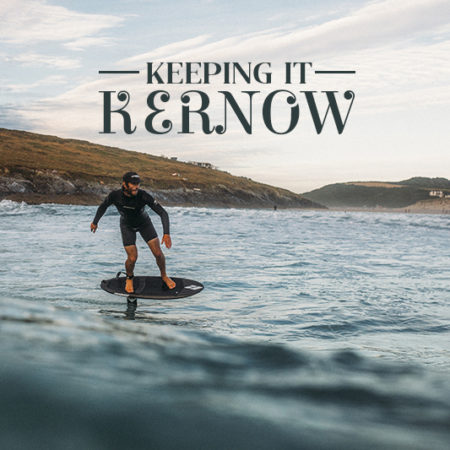