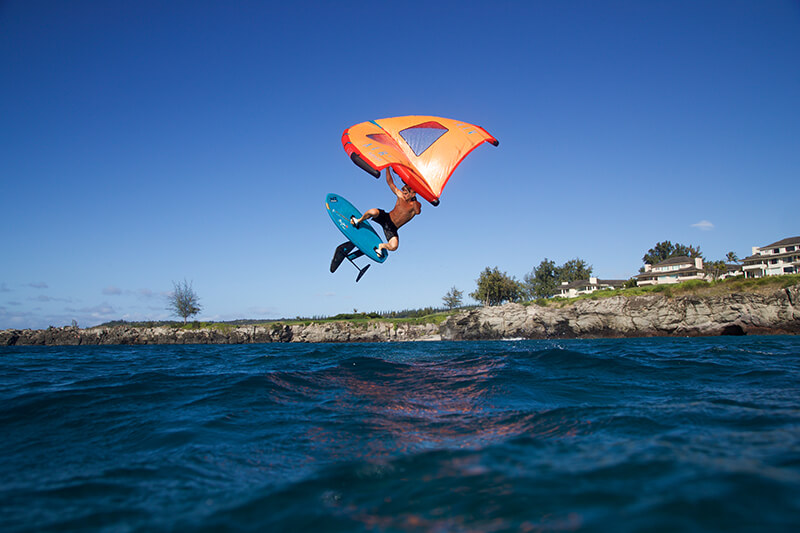 Here on Maui, an average summer day in Lahaina is paradise, yet can also get pretty predictable. Blue Skies, hot and sunny, the town busy with locals keeping a balance between free time with family and working around a thriving tourism industry. The factor that is constantly keeping us on our toes is the surf and the wind…

On this Tuesday morning, hungry for some action after receiving my new Freewing, I woke up early and scanned the horizon and coast for swell and checked the cloud line over Moloka’i to the north to get a vibe for what the day ahead may have in store for me. Looking straight out to the closest piece of coastline in front of my family home on Launiupoko Beach, and it looked like a lake! Even on a small day there’s an indication of what the south swell may be doing but there didn’t seem to be much to catch my attention. I look to the north though, and there’s some action! Early in the morning and already there is a visible cloud line near straight cut on the bottom and fluffy on the top, blocking any visual of the mountain peaks stretching from the east end of Moloka’i. Could be a good sign for some wind on the upper west side and north shore!

I called up my friend Adam Klevin to see if he’d be up to come along for the session I had in mind, as I knew he just got a killer new water housing for his camera that he was excited to test out. Adam is an all-around waterman himself, so it’s always fun and smooth lining up with him for shoots as he is a surfer, diver and fishermen, so he has an idea of how to anticipate and see what the rider sees. Adam was stoked to connect for the session as the location I had in mind is pretty much right in front of his house and because this would be his first session shooting the wind wing – plus we all have a bit more of an open schedule now that all us Maui/Hawaii residents are mostly out of work with the state wide business and tourism shutdown. This gave us the chance to experience our community and the island freely without the constrictions of work and without tourists populating the beaches, town and roads… 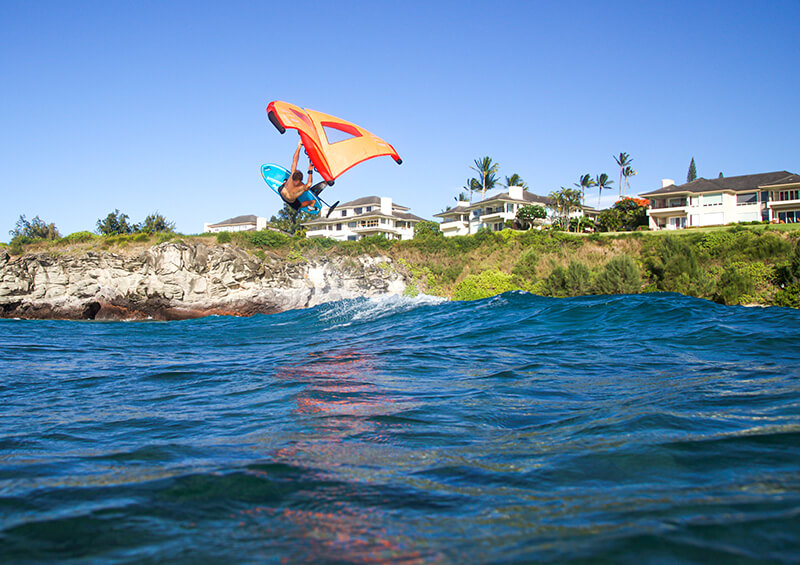 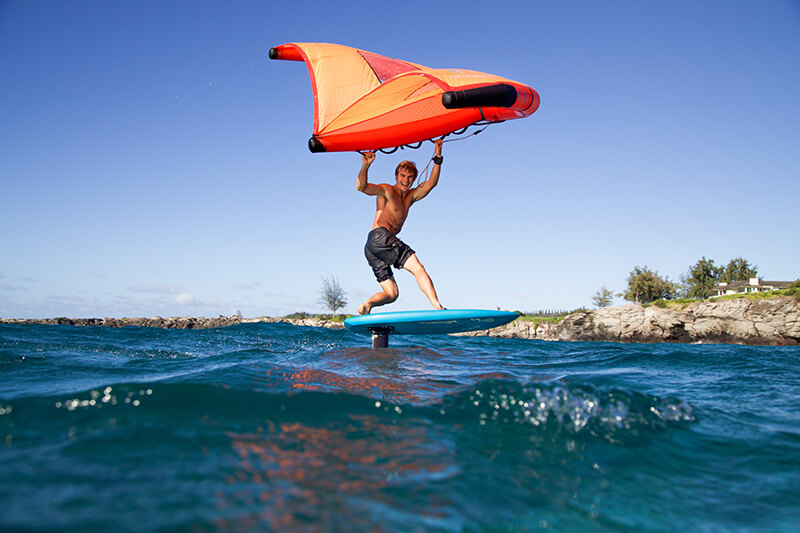 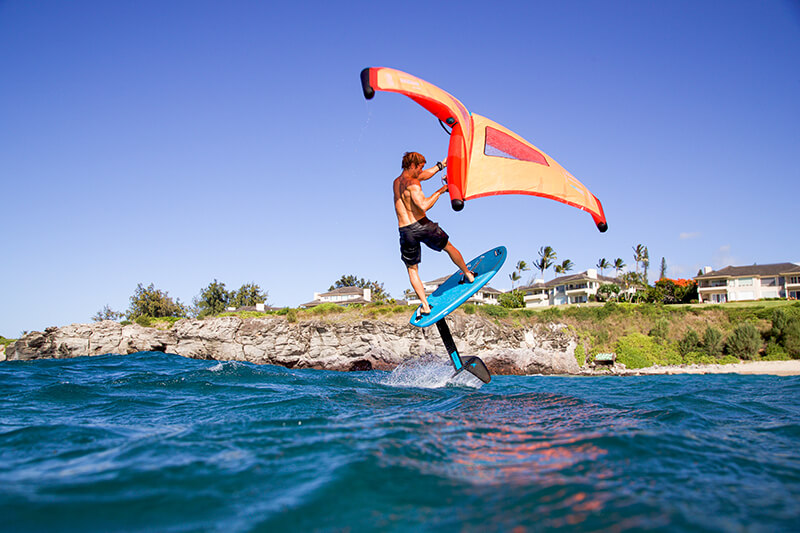 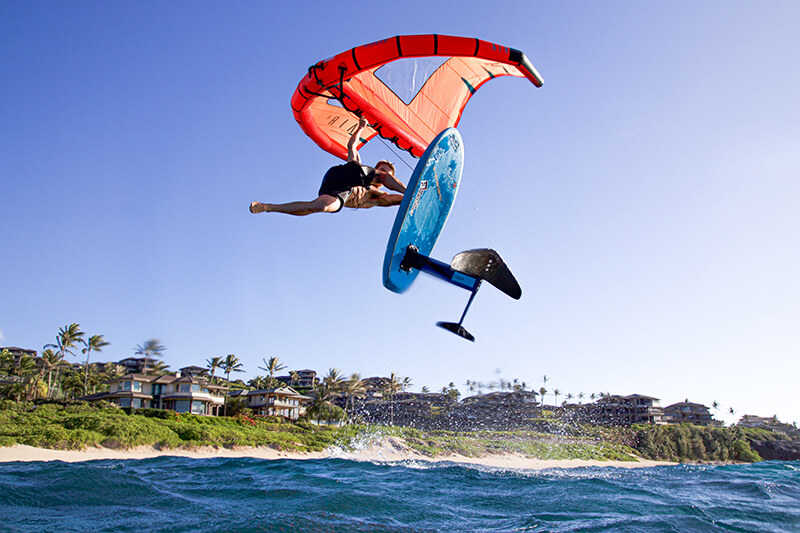 We met at Oneloa, a popular spot for surfing wind swell and small north swell, but today it was pretty blown out and small. Adam is just starting to mention how nice the scene is but is questioning what I’m going to be working with when it’s so small… However, I’m seeing the potential for some fun ramps on the lil’ 1-footers and playing with the wind on the wing! Not knowing what to expect, Adam hit the water with enthusiasm and I slowly and carefully made my way through the shorebreak and the shallow fingers of reef. Paddling my board upside-down and lifting the wing behind me with my feet, I’m already anticipating the biggest potential challenge/hazard, which is lining up enough of a runway to build speed on the inside, and hit the waves which are close to the shore in the shallower water. As I flipped my board over and jumped to my feet with the wing over my head, I’m thinking, “Eh minahs, keep it high! Haha auuraii”.

On my 4’8 board with the 4m Freewing, I felt powered just enough to bring the board up out of the water and pump the wing and board into flight. It’s light here on the inside of Oneloa Bay, with the wind shadow from Makaluapuna point just 200 yards north, but on the outside the wind is cranking through the Pailolo Channel! The strategy in mind was to build speed and keep flight heading in towards the beach, then carry that momentum through a jibe or tack, keeping the foil high and just under the surface in order to avoid hitting the reef, where the little wave ramps were. Adam was just like, “shoots, go for it! Let’s see what you can do!”

It’s crazy to think how an average day that most surfers in my network would call “junk” could be so much freaking fun on a foil – let alone the option of having the wind wing to open up our playground and potential for picking it up a notch when the wind is around, regardless of what the waves are doing! Today is nothing different, just another average day at home on West Maui, playing in the Pailolo Channel and blasting some fun little airs! The evolution of the sport of hydrofoiling and the unique sensation has consumed me over the last four years or so, and now so has wind wing riding. As a windsurfer and kitesurfer, I wasn’t sure how this category of the sport would fit into my lifestyle and the choice of craft on a windy day. I’ve found that it’s super convenient to include it in the truck/quiver, and super fun and versatile on most days when there’s just a puff of wind. Plus the fact is: everything is more fun with the foil! 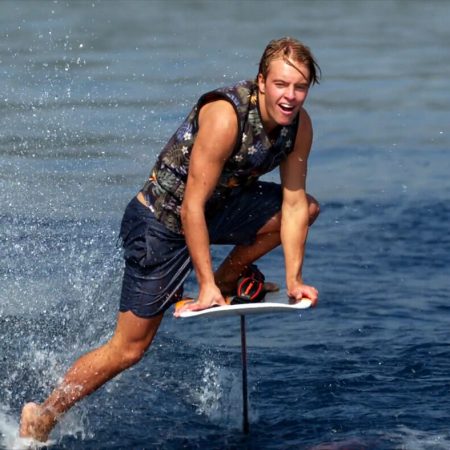 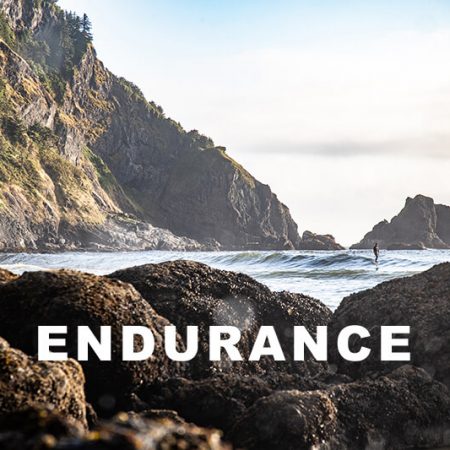 A series of life decisions, chance opportunities, and occasional mishaps led photographer Richard Hallman to the rugged coastline of Oregon… 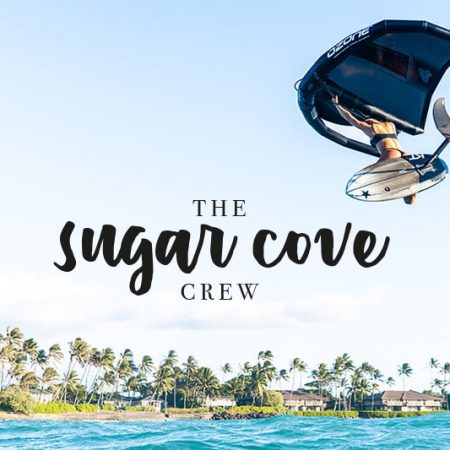 Noah Andrews documents the small and talented Maui-based young guns who are pushing the boundaries of the sport.