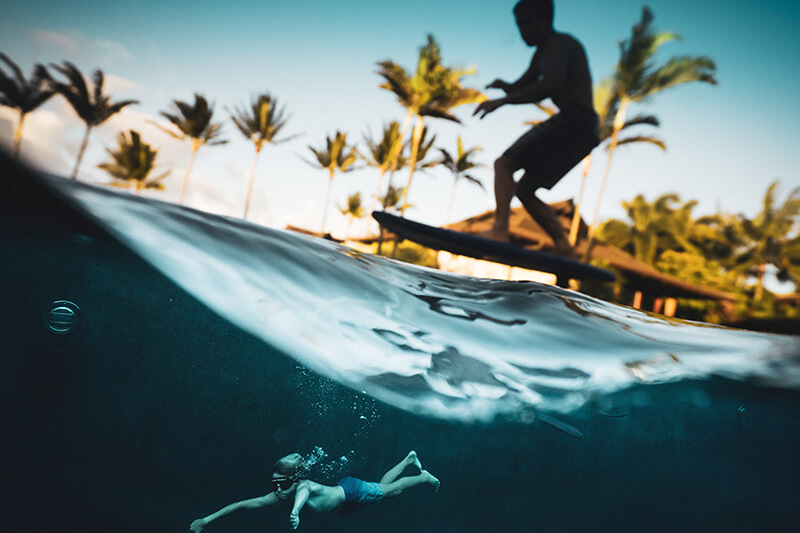 A taco party at a multi-million-dollar, nothing-short-of-dreamlike oceanside compound with a pool large enough to foil in? Uh, yeah, count us in…

But before you make any grandiose assumptions about the type of lifestyle we’re living here on a typical Maui summer’s day, this was technically a work assignment. My job? Produce a short film that would, in theory, excite someone enough to purchase this epic piece of property for over eight million dollars. But rather than doing a standard room by room tour, we decided to see what happens if we take some of Maui’s best ocean athletes, namely my older brother Kai Lenny, Ian Walsh and up-and-coming grom Otis Buckingham, and let them loose on the property for a day to show how this property can be the conduit for the ultimate Maui lifestyle.

In envisioning this video I’m thinking to myself ‘mellow wing session followed by barbecue kickback vibes hosted by Ian Walsh and the crew lounging around the property’s jaw-dropping villas and pools’. Sounds like the type of video a 50-something-year-old can look at and be like “Hey, that actually looks pretty nice!” However, what I didn’t take into account, but most definitely should have considering that we can’t sit still for five minutes without attempting something questionably dangerous in the water, was that a foil super session was about to go down in the property’s breathtaking 25-meter-long lap pool, all while our best friends cooked up tacos and sat poolside.

Foiling in calm bodies of water only being propelled by a quick jump off a hard surface and pumping under your own power (AKA a ‘dockstart’) is nothing particularly special in the foil world today. However, two summers ago, as Kai and I stood on the seawall at our local beach, it seemed borderline impossible. The idea of going from a neutral standing position to getting our tiny surf foils up to a speed fast enough to achieve sustainable lift, all within a matter of a second, was something that did not seem like it should work. It took both of us dozens of tries to get the right jump off the wall, time the incoming wave, secure the proper footing on the board, and finally be able to achieve a pumping cadence that would allow us to reach the break and ride a wave back in. Once we got it down it felt like the flood gates were open. We can now foil literally anywhere. 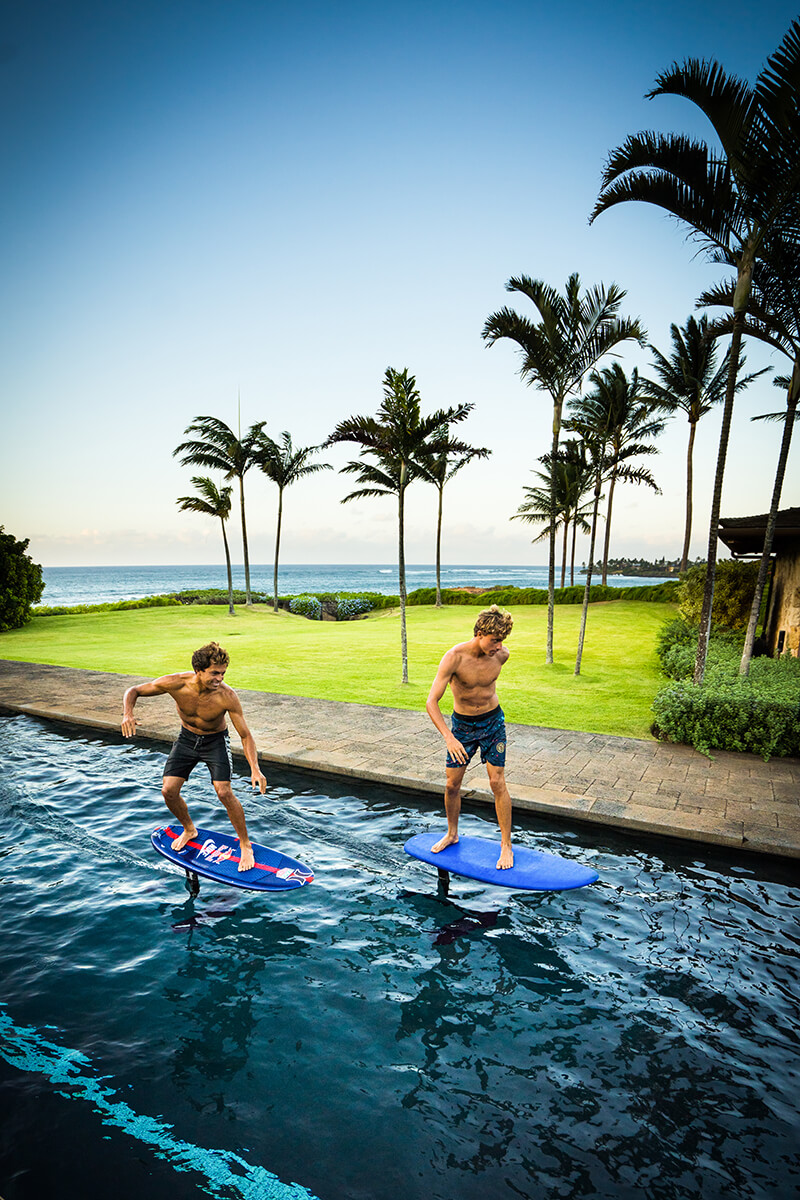 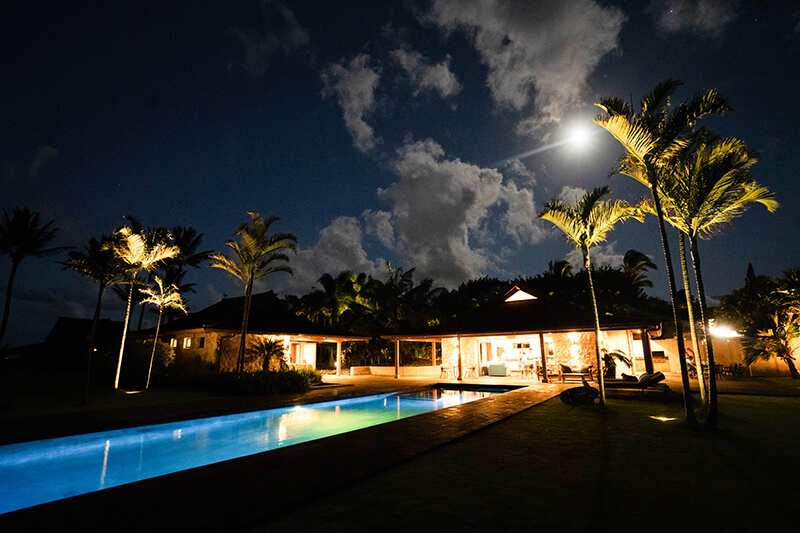 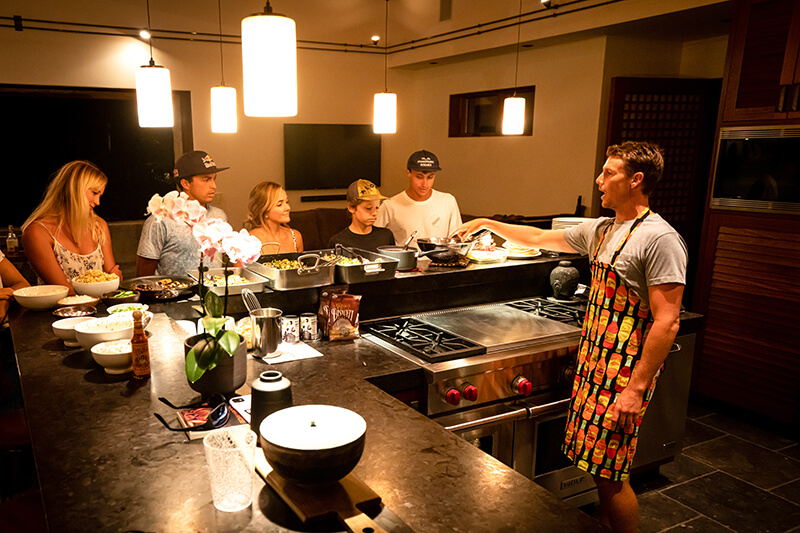 Fast forward to today and the dockstart is a pretty standard maneuver in the world of foiling. With the creation of foils specifically designed to flat water pump, it’s not surprising to see a rider pumping around in any body of water that’s more than waste deep. So, as we sat poolside smelling the savory aromas coming from Ian’s grill, foil setups ready to go after our wing session, it wasn’t a massive shock when the idea came about to foil across this pristine little set up.

Before we could even contemplate if the pool was deep enough and after a little convincing of the homeowner that we weren’t going to bash our heads in on the sides of the pool, I grabbed my board, took a few steps, and lazily pumped across the pool to the other end. Convinced he could do it better, Kai snatched the board from my hands and pumped across in the other direction.

The novelty of us simply pumping back and forth quickly wore off so Kai threw little Otis in the pool and told him to swim under him with a GoPro as he foiled past, only leaving a foot or so between the foil and his head. After nearly getting an underwater haircut a dozen or so times, Otis proceeded to steal the board away from Kai and dockstarted on his first try ever, leaving Kai and I pretty speechless, remembering how hard it was for us that one day at our local beach.

Just when Kai and I were starting to nail the timing on some doubles runs across the pool, nearly colliding with each other and with Brian who was shooting in the pool, the dinner bell rang and the excitement of trying Ian’s now world-famous cooking had us out of the pool in a matter of seconds.

As we sat at the dinner table eating our tacos and discussing who was going to get the most pounded at Jaws during the impending winter season, the strangeness of the day started to set in. We just spent two hours having the best time bouncing back and forth in a pool. I’d almost forgotten why we were there in the first place; no longer was it just another real estate shoot, it was just a fun session with friends. But that’s the beauty of the foil. No need for crazy waves, perfect wind, or even multi-million-dollar backdrops for that matter, just a body of water, tacos and a few friends. Oh, and if we can convince a millionaire to buy a house, that works too.