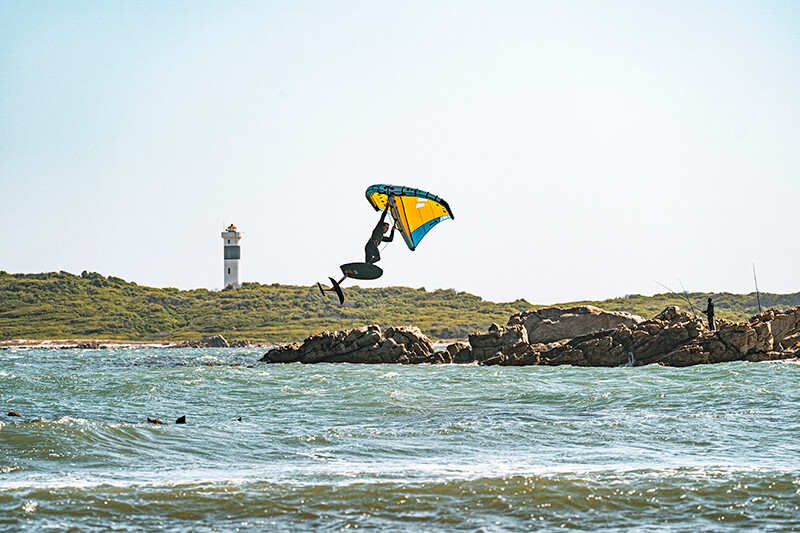 It’s not been the easiest year for brands looking to bring new products to market. In fact, between lockdowns, travel restrictions, border closures and the occasional wayward container ship shutting down critical global shipping routes, it’s fair to say it’s been a challenge like no other. The team over at Flysurfer are not ones to rest on their laurels while the world rights itself though, and team rider Luke McGillewie took the brand’s can-do spirit to the water while on a shoot in South Africa. All legal and above board (we think), Luke picks up the story… 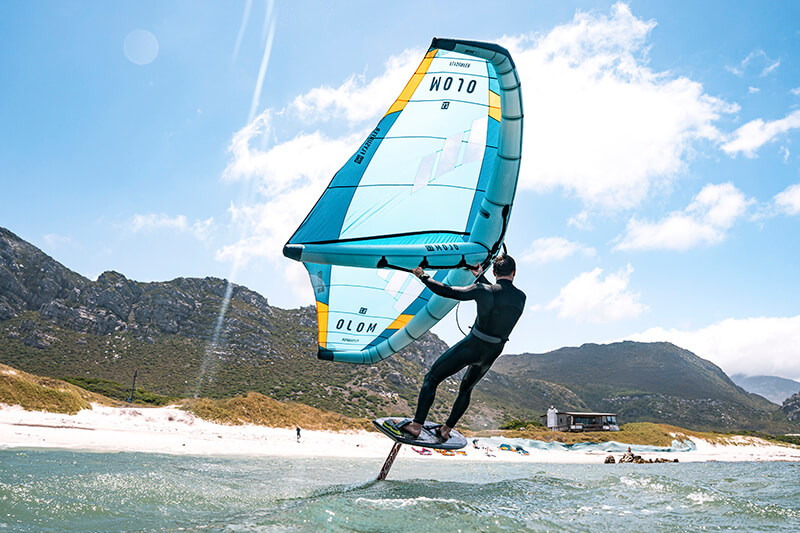 Picture this: An international brand books a shoot to create content on a range of new products in one of the only places in the world where travel is accessible, and the wind is blowing: South Africa. The shoot gear gets air-freighted to Cape Town, and on the day the gear arrives, the president announces another lockdown. Beaches are closed, and foilers are officially persona non grata! This was the situation that we on the Flysurfer team found ourselves in this past January. All geared up and nowhere to go. With our new MOJO wing ready to hit the market, we had a mission to accomplish, and we were going to find a way…

Alarms were set for 4:30am, leaving just enough time to brew some hot coffee to keep us awake on the long drive east. We piled the wings, boards, and foils into our vehicles and set off just as dawn was breaking. Armed with printed copies of the lockdown measures, fishing permits, rods, and even a spear gun, we were ready to toe the line and, hopefully, stay out of the slammer!

Our videographer Adam Sims had his target set on a beach in the Overberg, which he had scouted out the month before. We knew that the thick kelp forests could pose an issue for our hydrofoils, but the wind direction was just right, and the spot was well off the beaten path. There were two loopholes in the lockdown regulations that had us fairly assured that our sunrise strike mission would be mostly legal, using the boat slipway, and if that failed, trying to get on the water from an access-controlled beach. 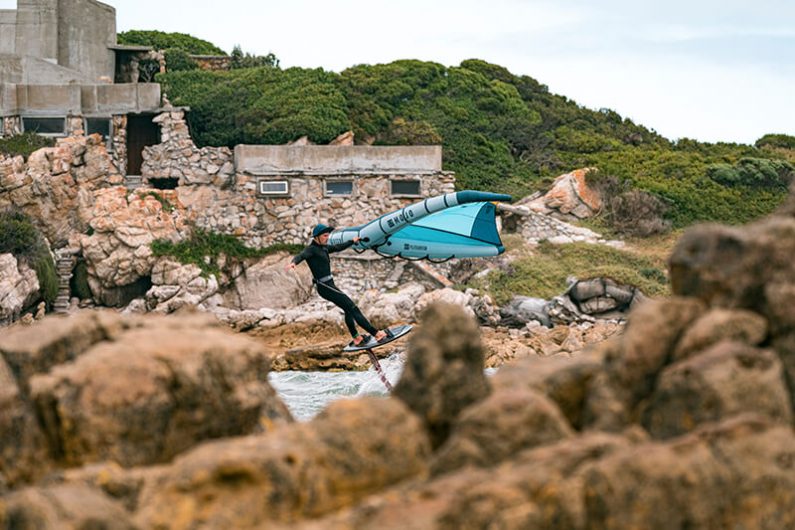 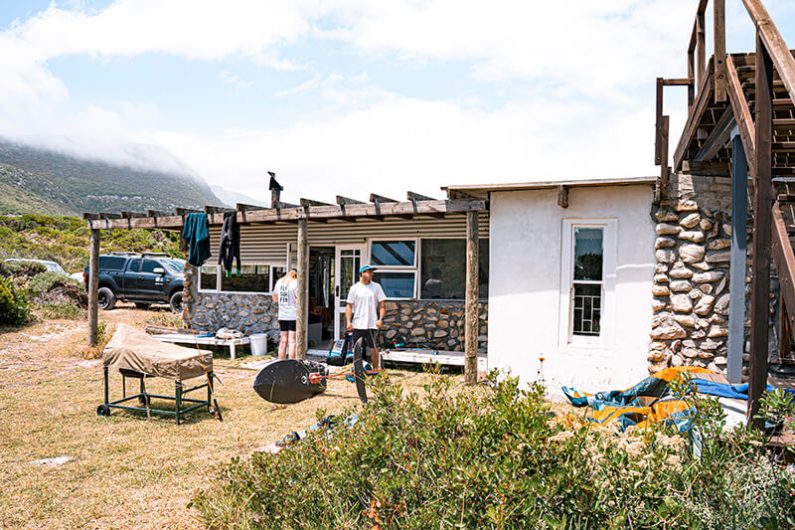 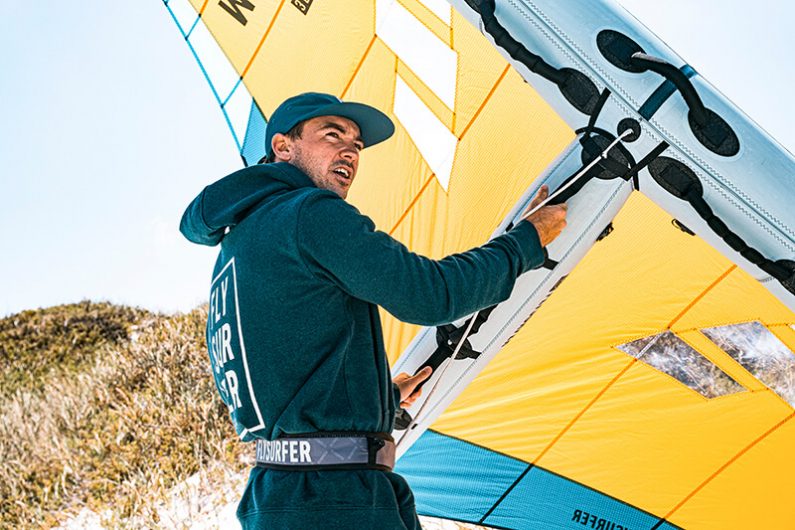 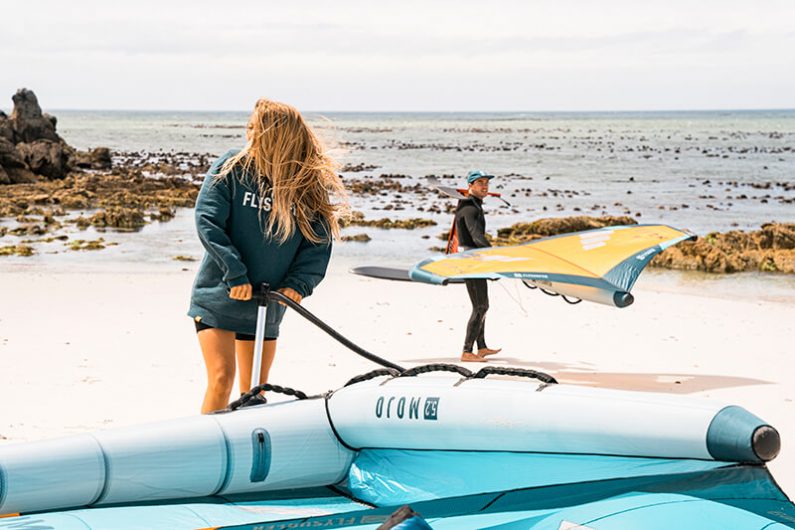 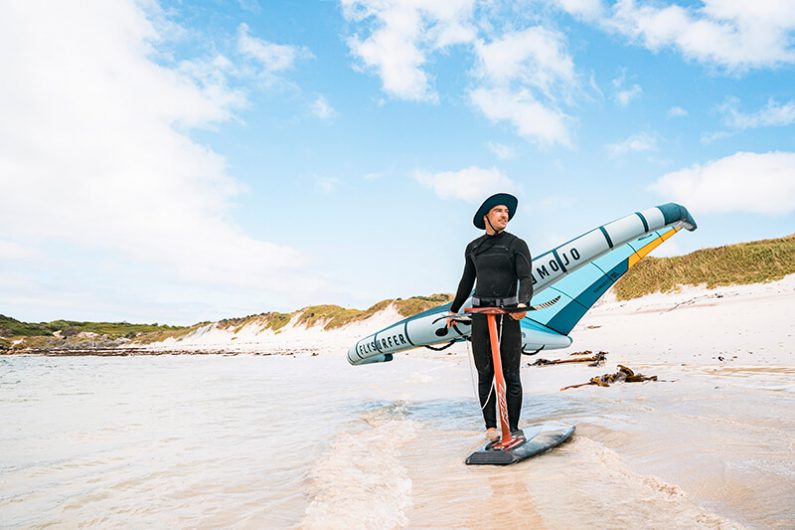 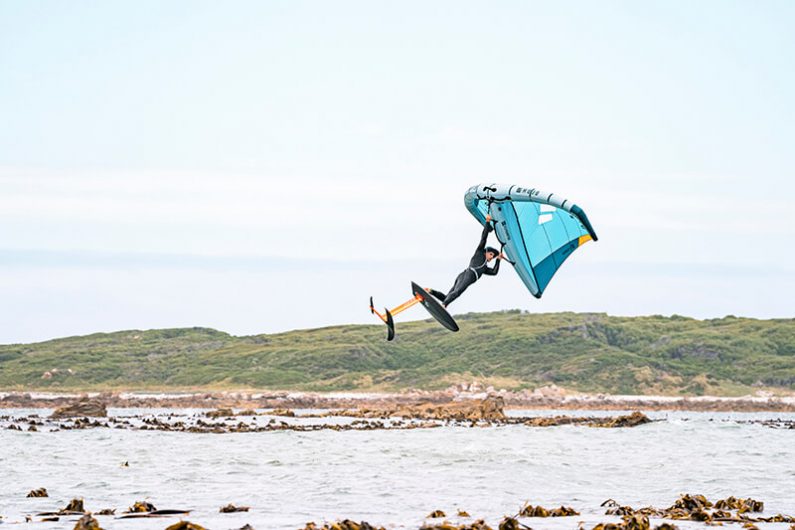 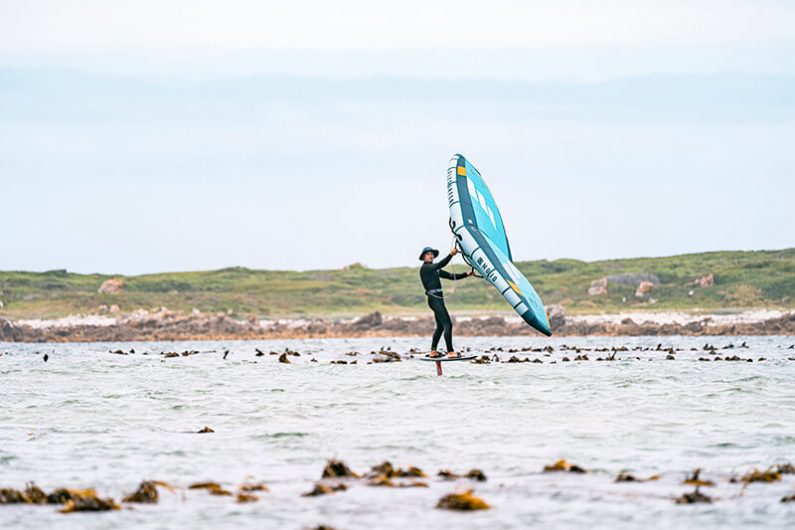 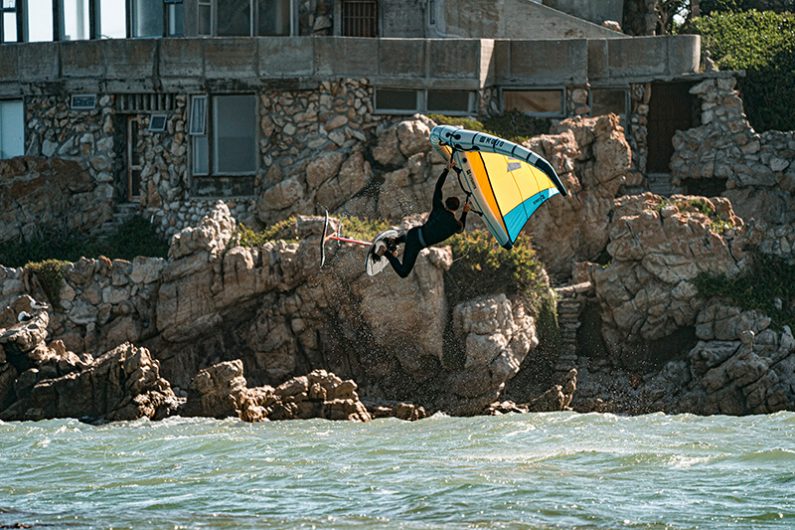 We drove down the bumpy dirt road on our way into Pringle Bay and arrived in the early morning, with a thick mist blanketing the area. We ventured out of our cars, shocked by the temperature. It was the height of summer in South Africa, yet the weather was freezing! We had not come prepared for the cold and scrambled to find enough layers to keep the crew warm. Luckily, we also had some new Flysurfer apparel and ponchos to shoot, and those blessed beanies were a lifesaver on an otherwise ice-cold morning. It was hard to leave the warmth of the vehicles, and the lack of sunlight allowed us to hunker down for a little longer. We watched as a crew of salty old fishermen cruised in through the fog and up to the slipway, bringing their vehicle around to load up and leave. We eyed each other through the windows, giving a friendly nod, hoping that they wouldn't report our strange behavior. While Adam may have passed for a fisherman with his sun-streaked red beard, the rest of us most certainly did not.

When the clouds broke, we piled out of our cars and started rigging up our fishing rods. It was still fresh, so photographer Miriam Joanna and I both got into our wetsuits, hoping the extra layer of neoprene would keep us warm until we were ready to get into the water. The slipway felt a little too exposed, so we loaded ourselves with wings and boards, camera equipment and fishing gear, and began our journey to a hidden bay around the corner on foot. With some of the group wearing the extra-long and comfy ponchos, we looked like a strange band of hobbits on a journey to Mount Doom. The scene became even more fantastical when we climbed over a small hill to find a weird, rocky house that looked like it had been completely built by one pair of hands. It sat like a guard tower on the rocks at the water's edge. We noticed a man sitting on a bench in front of the house, sipping from his cup of tea, watching us on our quest for MOJO content. Not wanting to irritate the locals, especially ones that lived in fortresses, I mustered up the courage to climb up the hill to speak to this mystery man. I put on my mask (as is protocol in South Africa) and approached. He gave me a very strange look, so I quickly removed the mask and stood at a distance while explaining what on earth we were doing. He'd been off the grid for some time and wasn't up to date on the latest Covid news, but he was happy to see some new faces and a sport that he'd never heard of before! 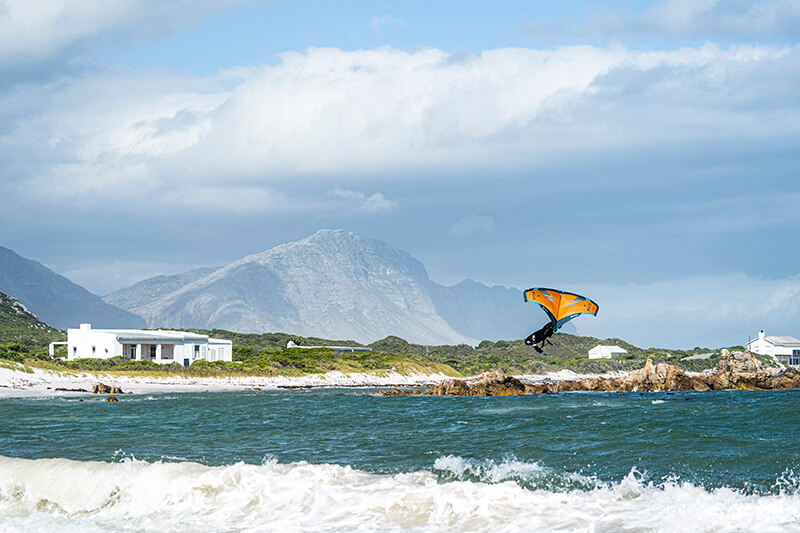 We got back to rigging our foils and pumping up wings while the camera crew set up and let the cameras roll. Our new friend – Dave – came down to the beach to see what it was all about and let us know that he had a small cottage behind the dune that we could use as our home base for the day. We were thankful for the protection from the windy conditions. We didn't realize at the time how valuable that little escape would be.

After navigating the kelp-filled bay on the foil for a few hours, we had managed to capture some incredible angles, showing a side of South Africa that I don't think has ever been seen before. Looking at the photos, we could have easily been winging in Ireland or Norway or, yes, even Middle Earth. Fellow team rider Alina Shalin was on the water getting some kite shots with Adam and Miriam while I took a break. The timing couldn't have been better because my phone was ringing. Our friends who were shooting some content for a different kite brand had just arrived at the slipway around the corner, and things were getting exciting. 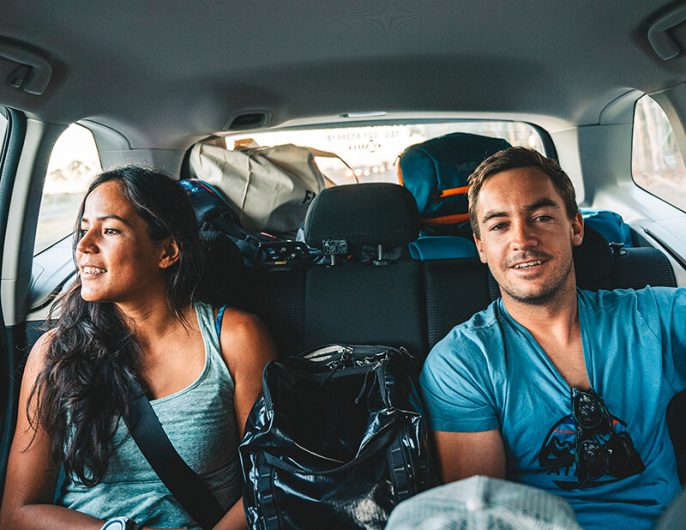 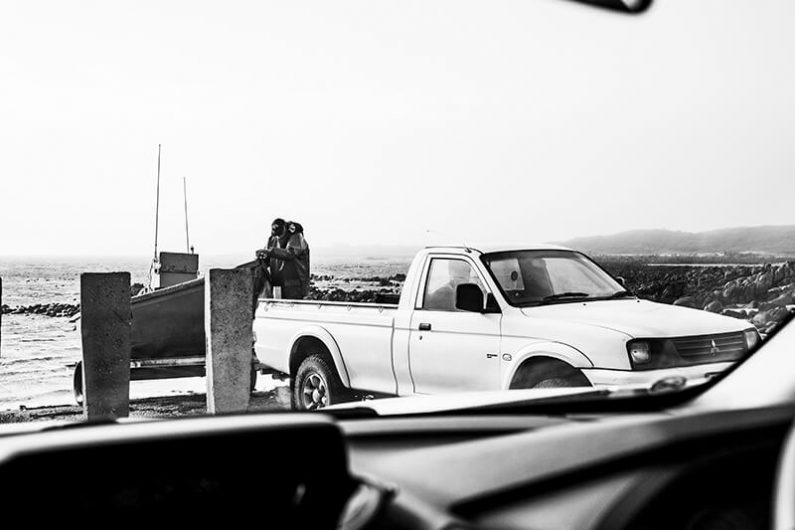 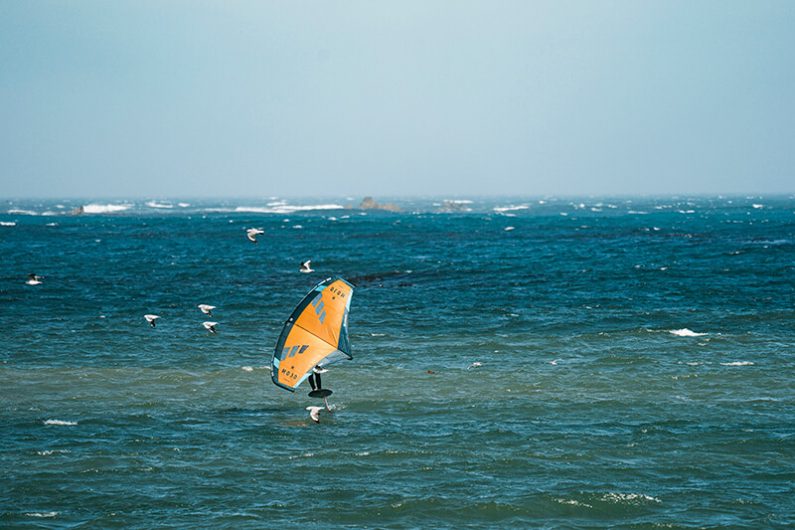 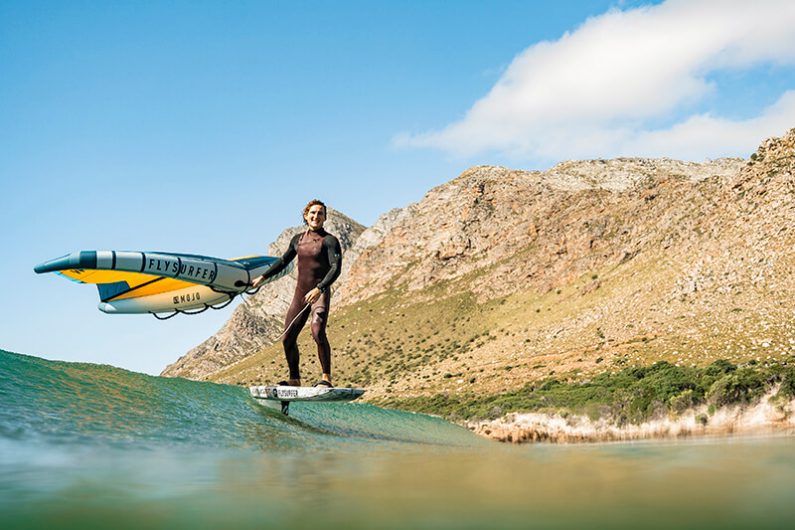 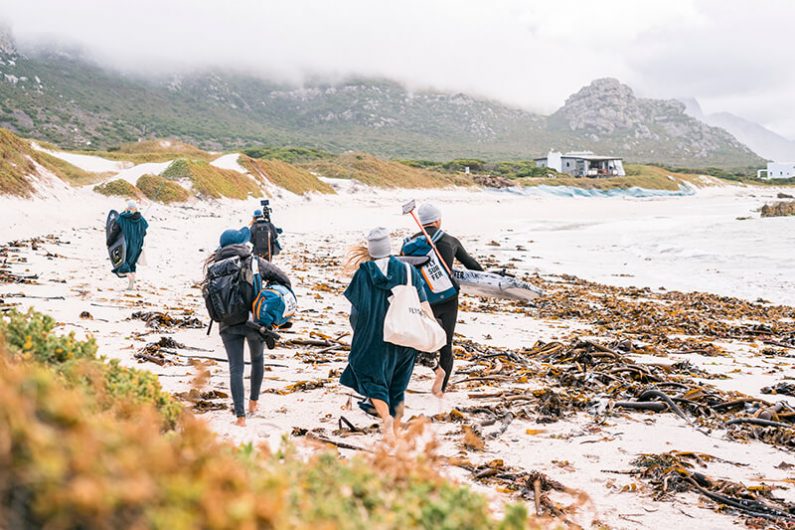 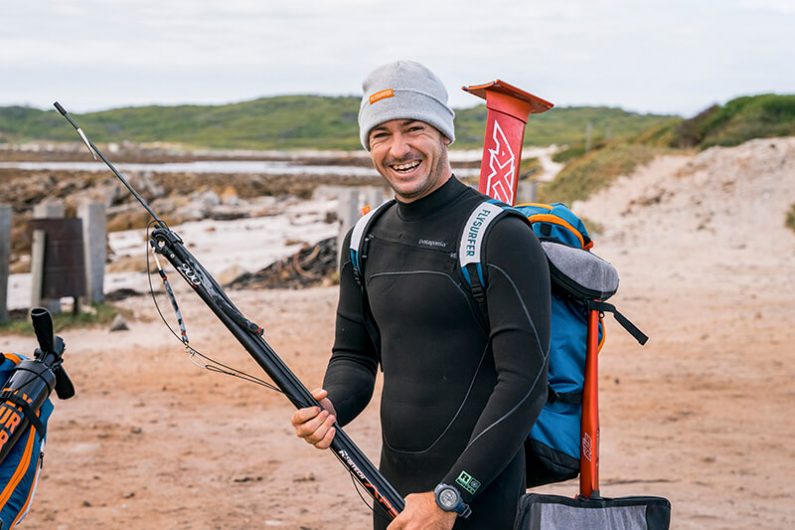 There were four police vehicles parked at the boat ramp with officers watching Alina's kite, just visible over the ridge. We had managed to avoid detection with the wing being closer to the water, but the kites had set off some alarm bells somewhere. Not being 100% certain if we were breaking the law or not, we panicked. I spread the news to the crew on the beach, and the mission to ‘GTFO' was underway. You've never seen a beach clear so quickly. In only a few minutes, everyone was out of the water, wings and kites were deflated, and we were all running over the dune ladened with kites, wings, boards, and cameras. We stashed our gear in the yard of our little shack, hearts racing as we tried to process what had happened. We moved up to the roof deck to get a view from above so we could see the bay and the ridge that we had hiked over, wondering if the police were on their way. After a debate with the crew and a quick check on our regulations, we were fairly certain that we were still keeping it legal and weren't at risk of arrest. We calmed down over lunch, laughing at the chaos that had just unfolded.

When the sun came back out an hour later, we couldn't resist pumping the wings back up and going for another session. The brightening blues skies meant the scenery was getting more and more beautiful, and we weren't ready to waste the light and perfect wind conditions. With one last session in the bag, camera batteries running out and SD cards filling up, we were ready to pack it in. It was safe to say that we had scored an epic day with a few moments of drama that we would never forget!