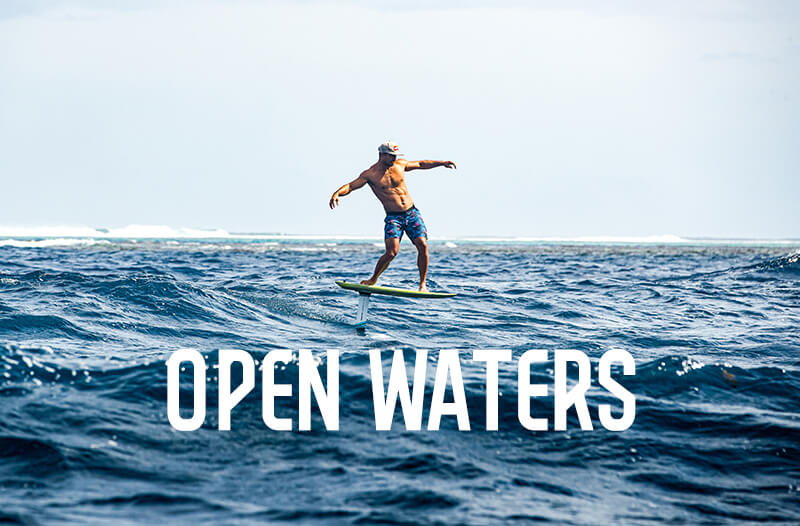 As one of the top contenders on the WSL tour, and one of the most impressive power surfers of his generation, Michel Bourez needs little introduction. From his home base in Tahiti, Michel gave our Contributing Editor Kjell van Sice some insight into the what’s what with his newfound relationship with surf foiling. And we even got a little insight into that shark encounter… 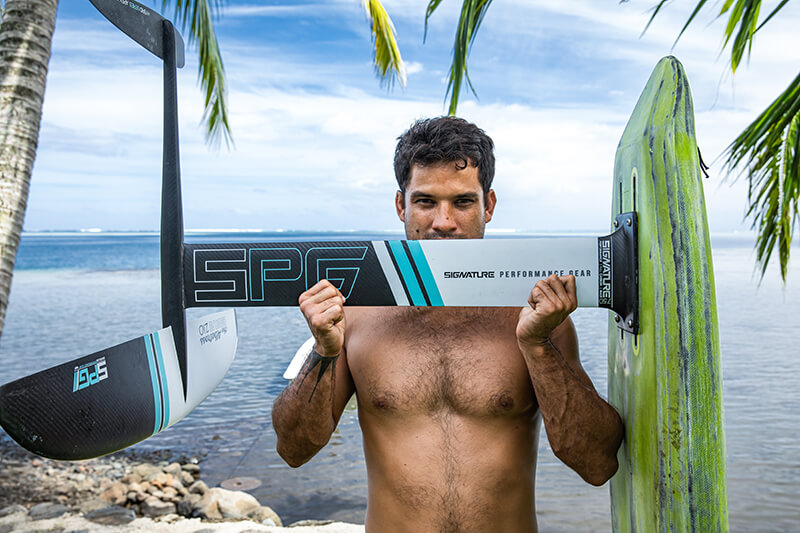 Michel, congratulations on finishing last year with your qualification for the postponed Olympics! This must be an amazing time in your career…

Yeah, I’m super happy about making the Olympics! It’s a different goal that I set early last year and I’m really happy to reach that one.

When did you learn foiling, and what were your early foiling experiences like?

I started to learn foiling about a year and a half ago with my friends here in Tahiti – Ben Thouard actually, one of the most famous photographers in surfing who also took these shots. I learned behind his boat since he was already foiling. John John was already into it too and he told me that Tahiti was perfect for it, but I didn’t believe him! It seemed to me at that time that foiling was a super weird sport and I couldn’t picture myself doing it, but everyone changes and it’s good to try something different.

Did you enjoy that process of being a beginner once again?

It’s always hard to start something new and try to get better, but it wasn’t too hard. Especially because it’s still on the water and I love the fact I’m trying something different to what I normally do, and I love pushing myself. It was hard at first because I was scared to fall on the foil and get hurt, but once I passed that, it was a huge joy.

How has foiling fitted into your waterman lifestyle?

To me, foiling is a hobby for when the waves are small or the wind is strong. When I don’t want to surf, I just take my foil out. I always have my surfboards and foil in the back of the car just to make sure that I can fulfil my daily routine of spending time on the water. It’s something that I always do nowadays – surfing and foiling at the same time.

It’s been quite exciting to see the WSL share content of other tour surfers like Caio Ibelli, John John Florence, and Sebastian Zietz on foils. What has been the surfing world’s reaction to you picking up a foil?

Yes, John John has been doing it for a long time, and a lot of pro surfers as well. It’s a really good way to get out, surf, and spend time on the water and it’s super physical. It’s good training and you can push your limits. You understand the way the ocean works more because you’re high up on the water. At first, people don’t really want to do it because it’s new. It’s only when your friends do it that you get into it. To me, to watch all the pro surfers doing it, I didn’t care at all, but when my friends in Tahiti started foiling, that’s when I started too.

Do you think foils will remain fun curiosities – lay-day-saving machines, if you will – or does this sport have the potential to grow into something similar to the current competitive surfing establishment?

I don’t think foiling will ever become as big as surfing from a competitive angle just because it’s a different mindset. To me, when I go foiling, it’s to get away from surfing. If I want to do something like a big air, I’ll do it on a surfboard. Foiling is more just cruising – it’s more like on a longboard.

What is the foiling scene currently like in Tahiti?

Over here in Tahiti, there are lots of foilers nowadays. We have a lot of wind and there are a lot of places on the north east coast where you can go out without anyone else around. We do a lot of downwind sessions where we take a ski out and go wherever the wind goes for two or three hours. It’s amazing, we’ve done one from Tahiti all the way to Mo’orea, which is 30kms of foiling, which was crazy. We don’t do the big airs here yet. We are more into understanding the process first, how it works. I’m sure the next generation will go for big airs, that’s the next step for sure! 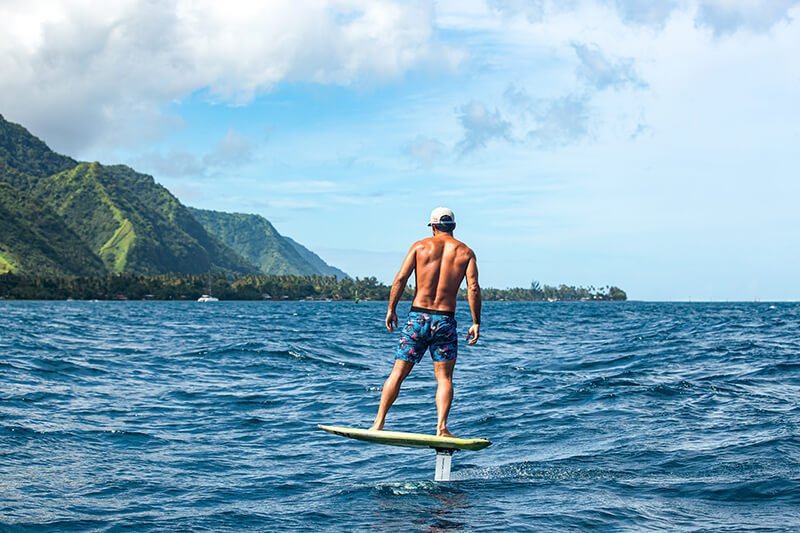 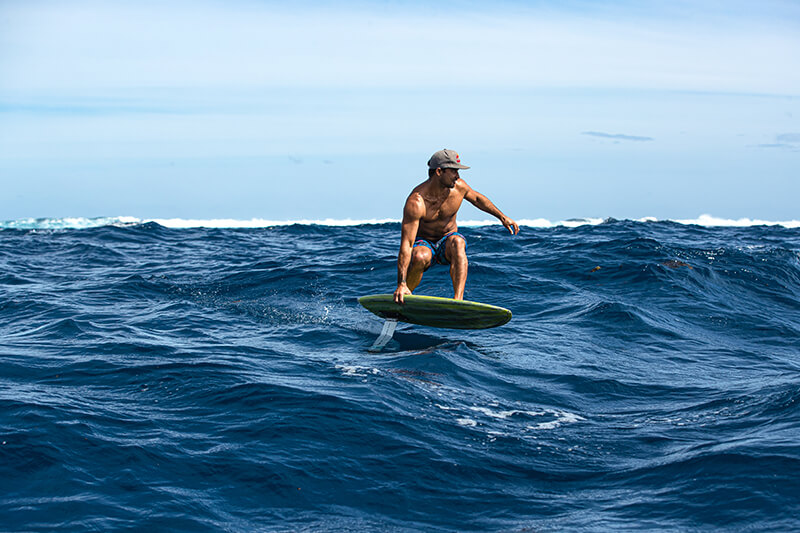 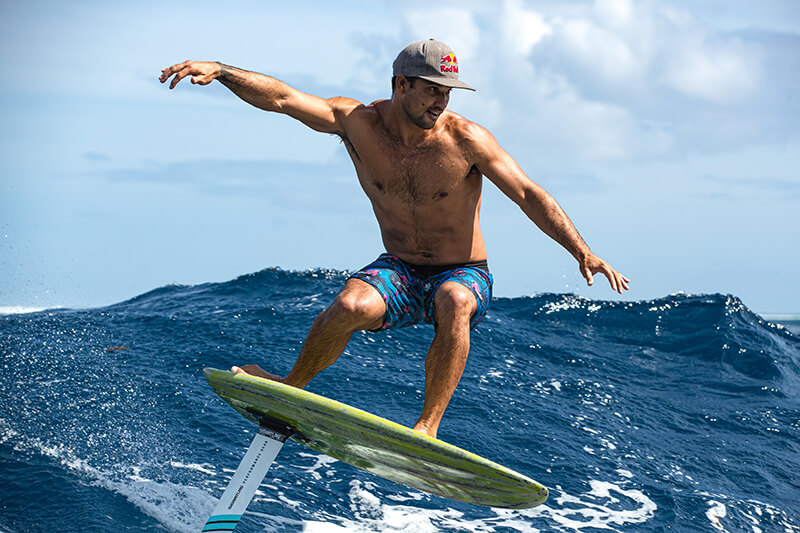 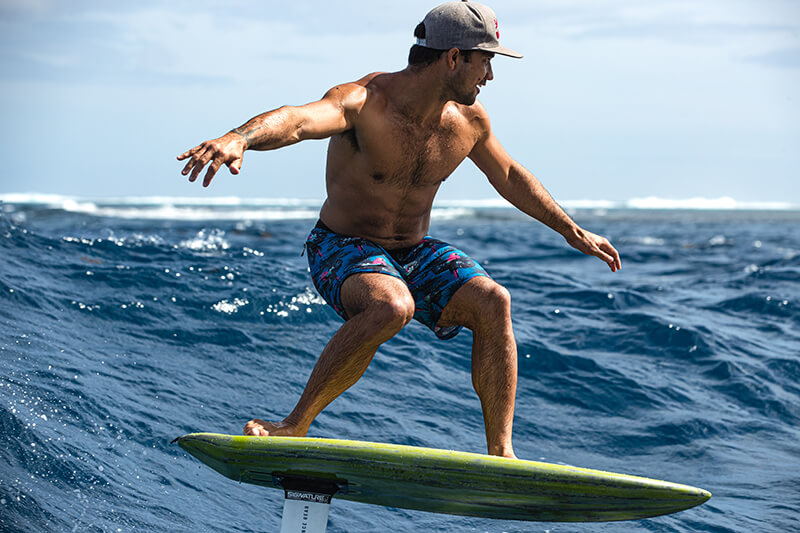 What do you think about foils in the line-up, and how should we best coexist with surfers?

I feel like foiling should not be done where there are a lot of surfers in the water just because it’s a sport where you need to be apart from everyone because it’s super dangerous. Sometimes if you’re not that good, you want to go where you’re used to going surfing, but when you get better, you want to go away from everyone. I don’t want to be around people and make them hate foiling, because that’s exactly what’s going to happen. If something happens at one spot, then foiling will be banned. So it’s important not to do that.

Let’s talk gear. What are you currently riding, and what have you learned from the different setups you’ve ridden?

I’m riding with Signature and I’m not the best foiler ever, so I use the Albatross wing because I think it’s the best wing for everything from downwind to surfing. It’s a good combination.

Have you brought over any aspects of design that you love in your shortboards into your foil boards?

I don’t think the board has a massive impact on foiling. The wing and the mast are the most important parts. The board will always have its part, but not as much as when we surf on a normal surfboard. I thought about a few things, though… I want to be able to do the same big carves on a foil that I can do on a surfboard. I’m not trying to do airs, but I want to do something like a nice roundhouse cutback.

So who’s your favorite foiler to watch, and why?

Kai Lenny is definitely the main guy out there, he’s the most complete waterman. He’s the one you have to look up to when on the foils, but at the same time, it’s not like I want to be like him. Foiling to me is more like an escape pod from surfing, I don’t want to be the best at it. I just want to feel different experience. 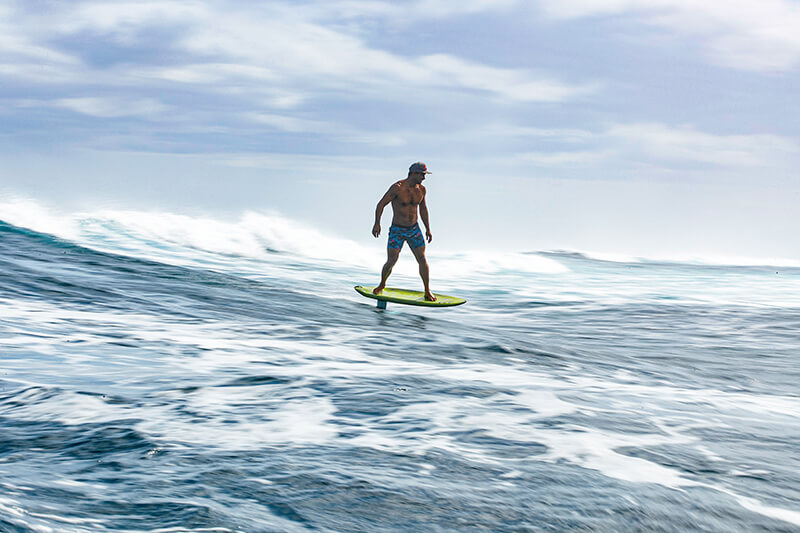 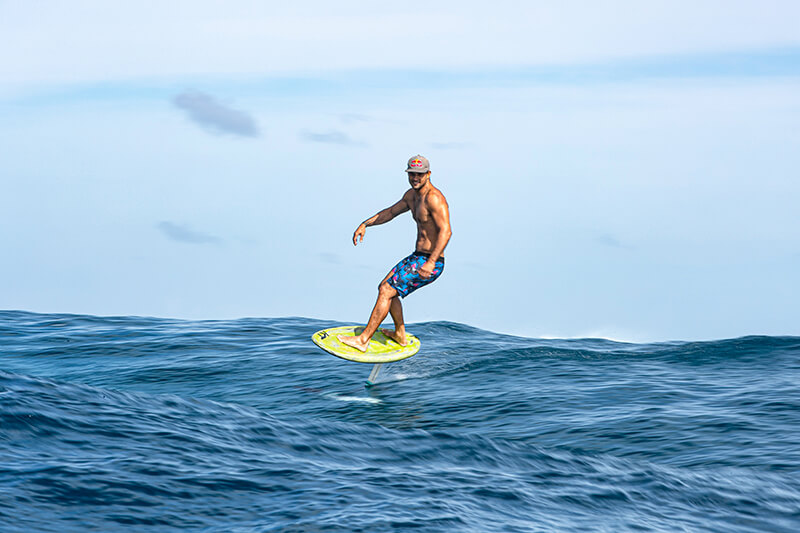 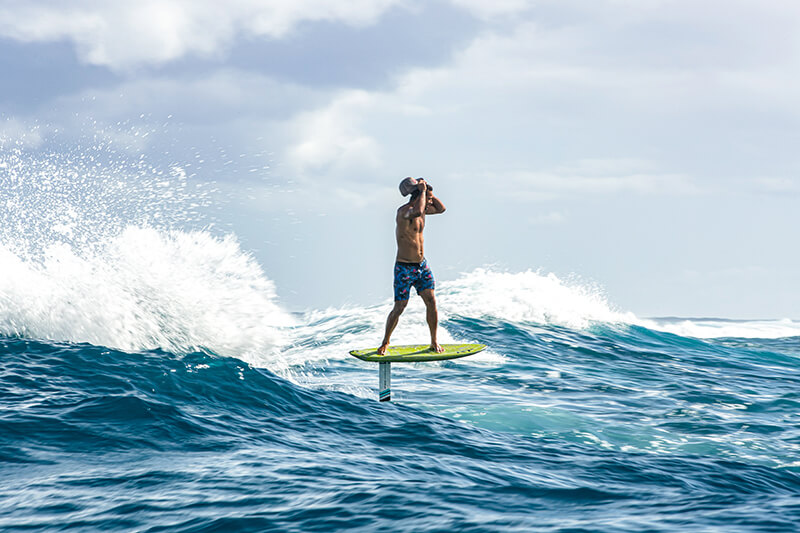 Finally, paint me a picture of your most memorable foiling session!

My most memorable session was definitely the one from Tahiti to Mo’orea. It was beautiful, with such strong wind, so it was perfect for downwind. We saw so many wild animals like big sharks, turtles, big tuna. You can see everything when you’re foiling, and you feel like you’re alone on the ocean. Everything is so quiet and you have birds flying around you… it was a special moment.

Editor’s Note: Shortly before his photoshoot following this interview (and somewhat ironically, given that last answer), Michel had an interesting encounter with another Tahitian local…

I was doing a downwind from Tahiti (Mahina) to Mo’orea (Vaiare) when a hammerhead shark chased my foil and bit it. He broke the tail of my Signature foil, so I couldn’t keep going. I waved at my friends on the boat to come pick me up. After two or three minutes of waiting by myself, I felt something was wrong so I stayed alert just in case the shark came back again. And I was right! The hammerhead, who was three to four meters long, came back at me so I put my foil in between him and I to protect myself. He bit my foil a second time, realizing this time that it was definitely not edible…. The boat picked me up a few minutes later and I was safe. I have no bad feelings for the shark at all. He just owes me a new foil!