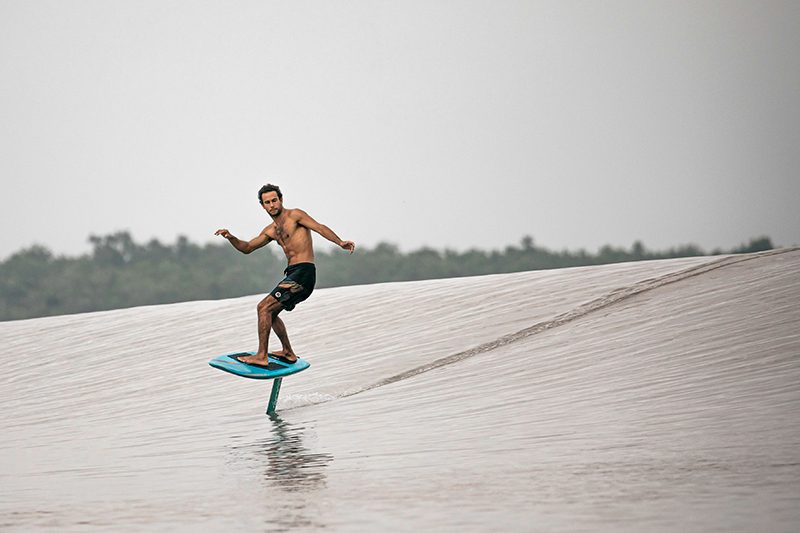 If there was ever a moment in modern times that called out for a good old-fashioned adventure trip, somewhere deep in the distant beyond where rolling news and social media algorithms can’t be accessed without a great deal of effort and phone battery life, this is probably it. Vinnicius Martins and friends heeded that call, did some research, and headed for the Amazon…

In Brazil, when you are a child in geography class, you may learn about a peculiar phenomenon that happens in the Amazon Forest, called Pororoca…

Every full and new moon, instead of the regular change in the river flow, the high tide comes in the form of a very strong and large wave that rushes down rivers in that area, breaking trees, boats and scaring the natives. Its name comes from the indigenous term ‘poroc-poroc’, which in the native language was a way of expressing the act of destroying everything… This was basically all I knew about the wave when I started to think about surfing it. The only other thing I knew was that, by the looks of it, the Pororoca was perfect for foiling!

There are always a lot more things to learn about a place and a phenomenon than what we find in schoolbooks and though internet searches… So I contacted a few friends to come along and see what we could learn about the Pororoca in the real-world classroom. Joining me on this trip were Chloe Calmon, Brazil’s top longboarder, and the two amazing surf photographers whose pictures feature here, Ana Catarina and Analice Diniz.

I was lucky that these people were not only really good at what they do, but also just great to be around, even in the toughest of situations – and that was crucial on the trip we were about to start.

In the days before I departed from Rio de Janeiro, I started to realize that organizing the whole operation to surf the Pororoca would be far from easy. The wave comes once a day (and once at night, but I wouldn’t recommend that…) for four or five days in the month, leaving surfers with only one attempt to surf it per day during this window. To make the most of your chance you need a very well-tuned set-up in terms of boats, jet skis and experienced pilots to navigate your way for around one hour up the river and into the middle of the jungle to make sure you’re on time for when the first sections of the wave appear.

After countless phone calls and messages, we managed to arrange just one jet ski and one boat… those were the only vessels we could get our hands on for the whole trip. And the boat never showed up.

So once there, and with our boat AWOL, we had to be creative and figure out how to get four people, one pack of foil gear, one longboard and two cameras loaded onto a jet ski to chase the Pororoca and film it… Practical attempts to fix our situation changed every day and, amongst others, included a ride on a boat that caught fire; a 50 minute hike through the mangroves with the local kids; some crocodiles, and a whole day spent between drifting down the river in a broken vessel and pushing our jet skis through the mud while pleading for the help of drunk locals, only to finally be saved at 8pm by a 17-year-old mechanic who later became one of our guides!

Despite all this chaos, we didn’t miss the wave once, and most importantly we always kept a good sense of humor. I was proud to be traveling in a group with so much good energy. 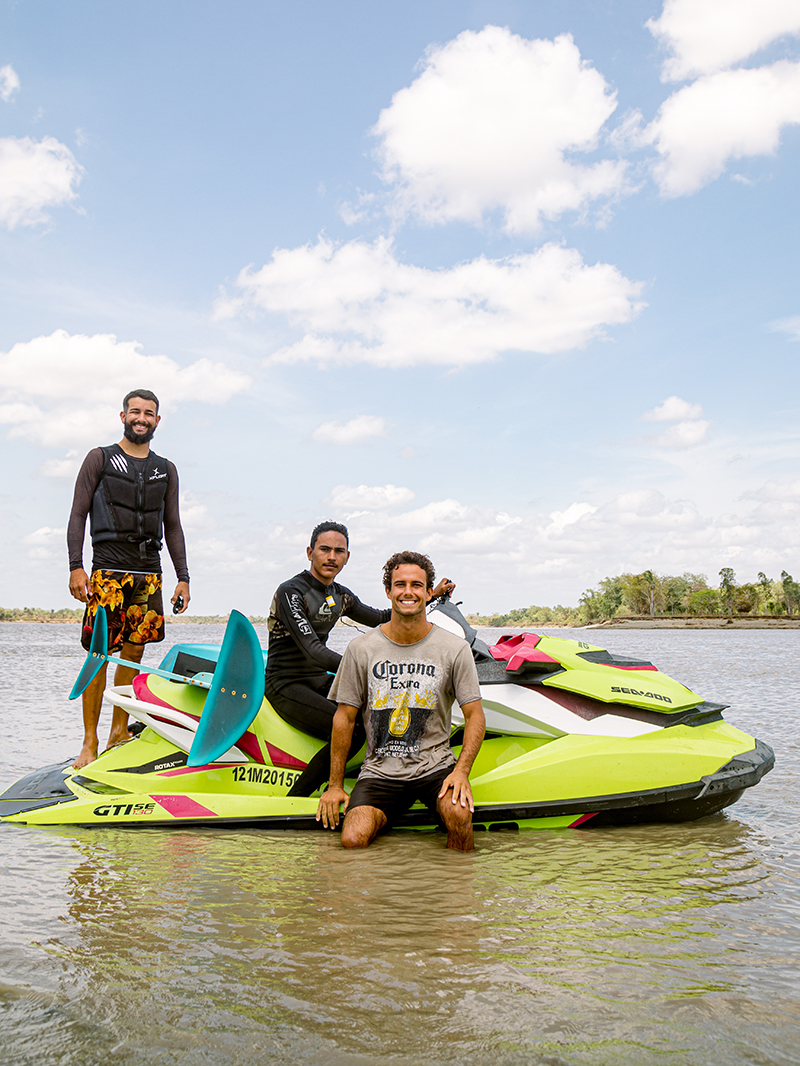 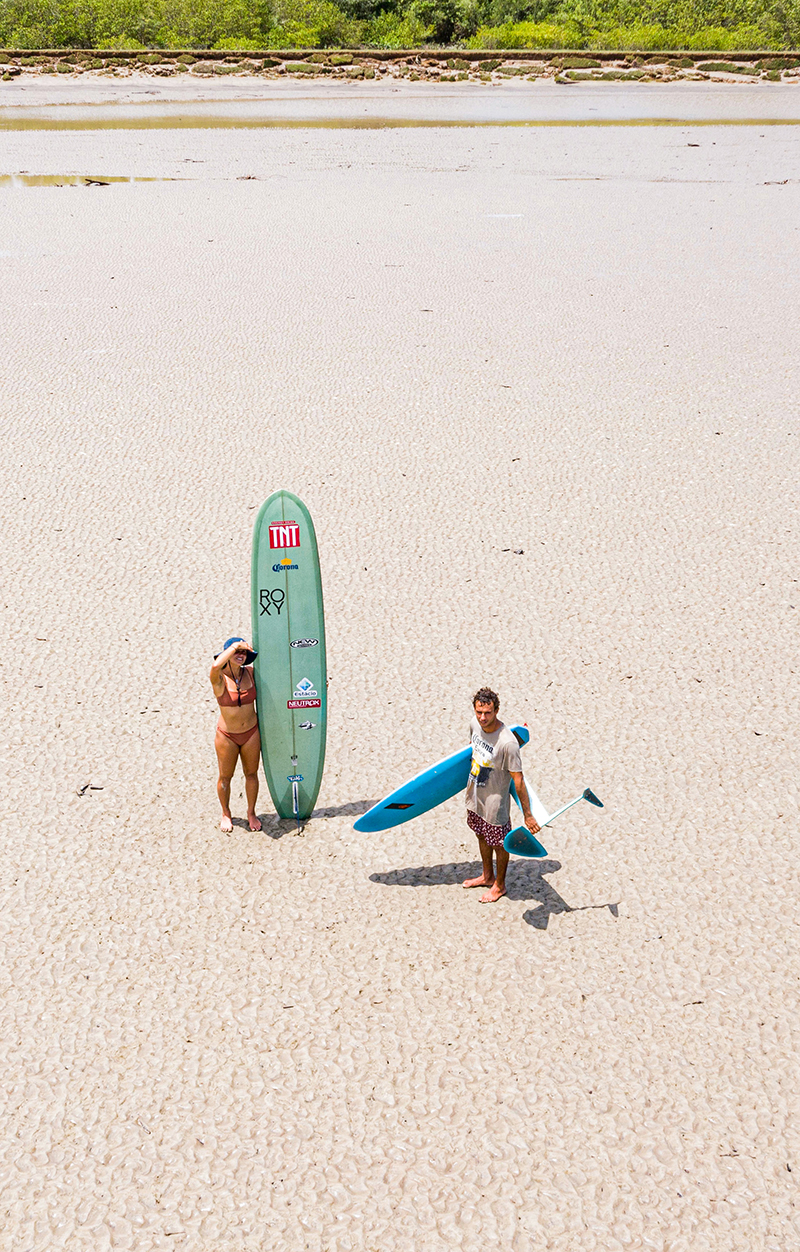 If you ask me to describe the Pororoca in one word, you would be giving me a very hard task… But I would go with the word “volatile”.

What impressed me the most about this wave, apart from the surreally long rides (some up to 15 minutes long) was how much it changes during its course down the river. At some moments it can be an overhead, very well defined left and right peak, and then just a few meters further ahead it can become something like a wind swell, before then turning into a very fun and mellow left hander… The lower reaches of the river are way less consistent than your average beach break though. Its winding curves also influence how the wind hits the wave… sometimes it is onshore, and seconds later it’s offshore. Its course is so long, it allows plenty of moments where these changes happen.

It’s a very different way of surfing… you have to try and guess what the wave is going to do hundreds of meters ahead, while doing turns and choosing a line that suits the present form of the wave. It’s pretty challenging but very fun! Especially on a foil; the versatility and speed makes it the perfect tool to ride this crazy natural phenomenon. There’s also the feeling of surfing in the middle of the jungle, the taste of the freshwater, all the strange noises you hear coming from the tress and the thrill of not being able to see where the end of your ride will be…

It was definitely a mind-blowing experience, but one that can only be lived by those with a fair bit of adventurous spirit. 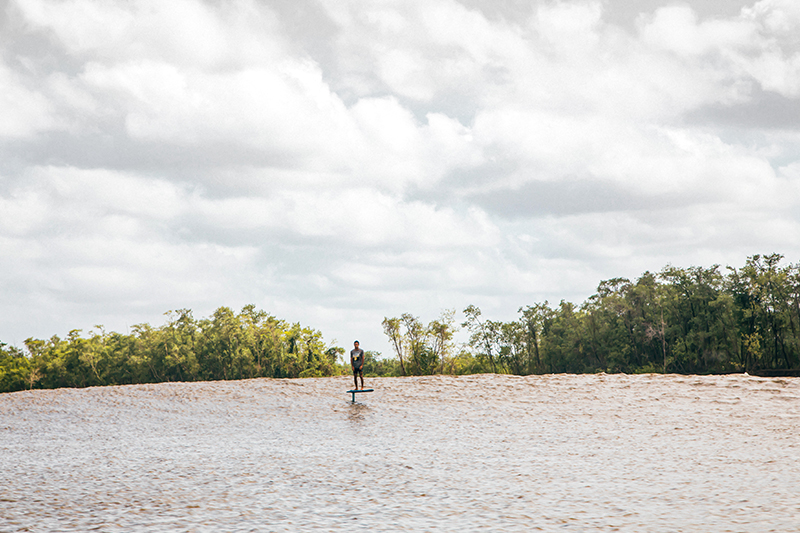 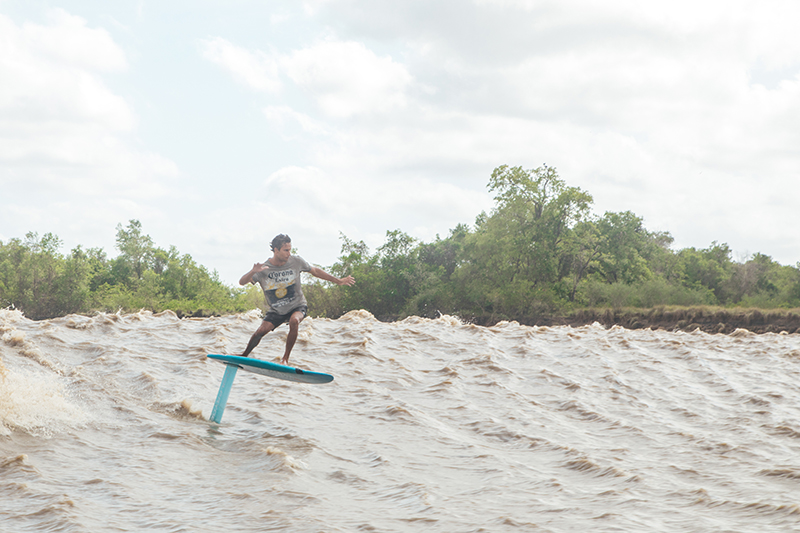 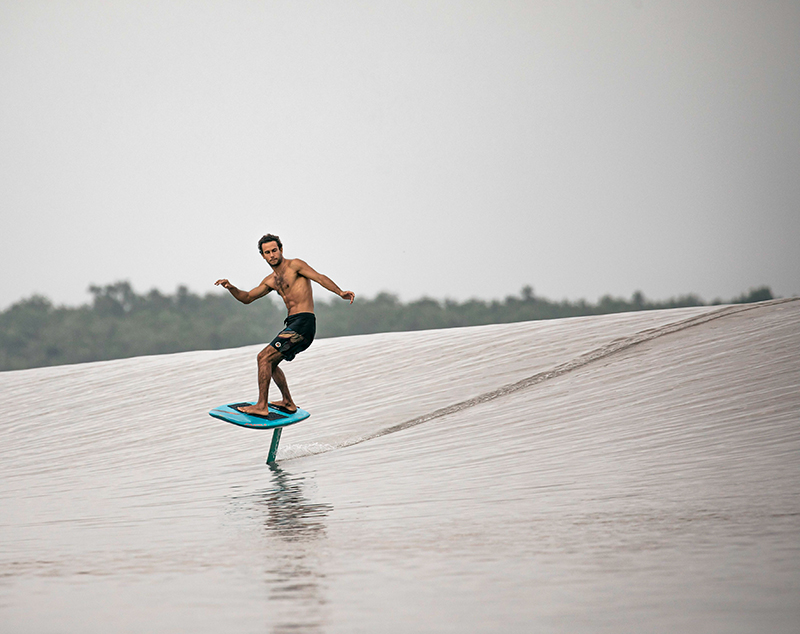 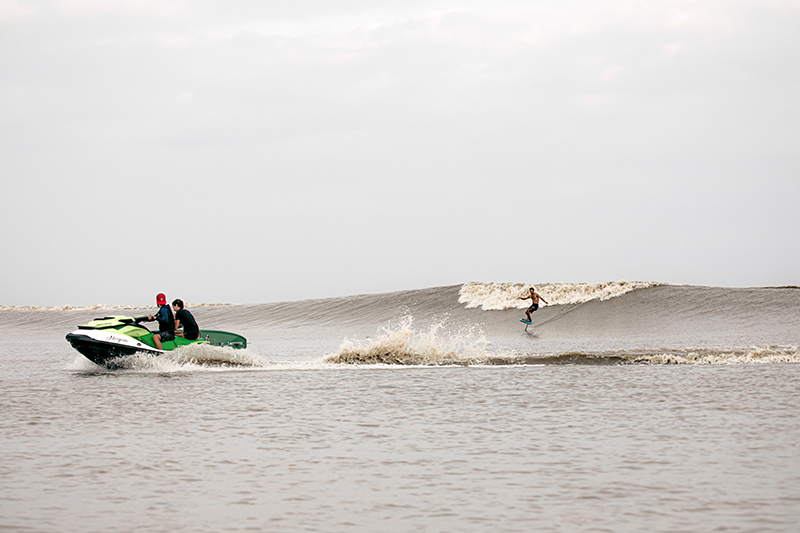 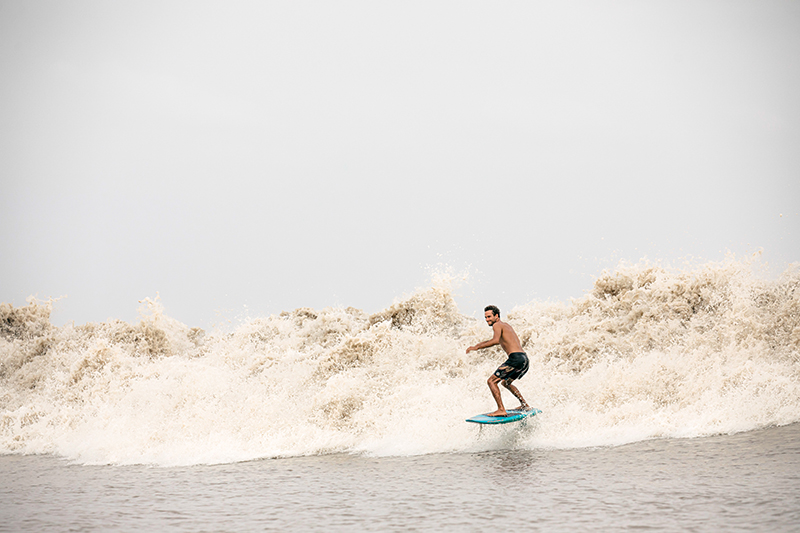 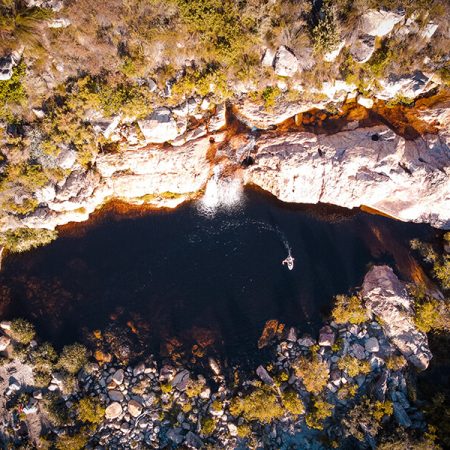 Red Letter Day – Get into the Mountains & Surf!

Words & Photos: Kyle Cabano Rider: Dylan Wichmann Location: Cederberg, South Africa Date: Tuesday, December 1st, 2020   This trip began as all classic trips do, last minute! Dylan Wichmann and I have been shooting together quite a lot over the last year, and with my forté being water shots it is safe to say 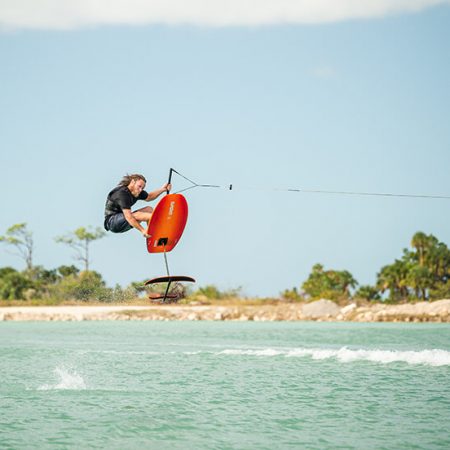 Louis Floyd took up an invitation to head into the boondocks in the search for something new. 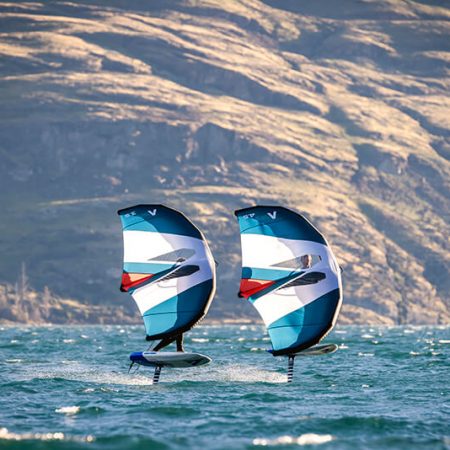 Coaxed down by the promise of adventure and epic backdrops, Bevan Gooch and Armie Armstrong dug out the thick rubber and got on a plane to foil in the southernmost wing foiling destination - Queenstown in New Zealand.