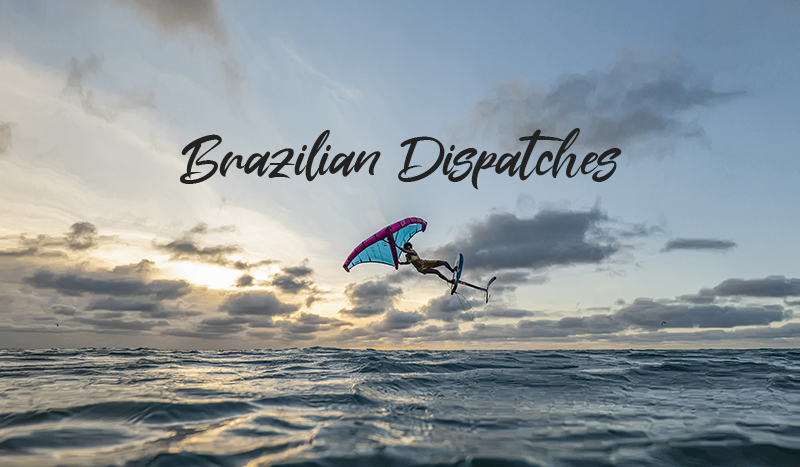 As highly ranked windsurf professionals following the PWA World Tour, best friends Oda Johanne Stokstad Brødholt and Sarah-Quita Offringa are used to rocking up to beautiful and windy locations and having fun on the water, because, you know, that’s their job…
Now, with winging as part of their skilled repertoire, it’s opened up even more options for good times. And Brazil? Well, Brazil just hits that little bit different… 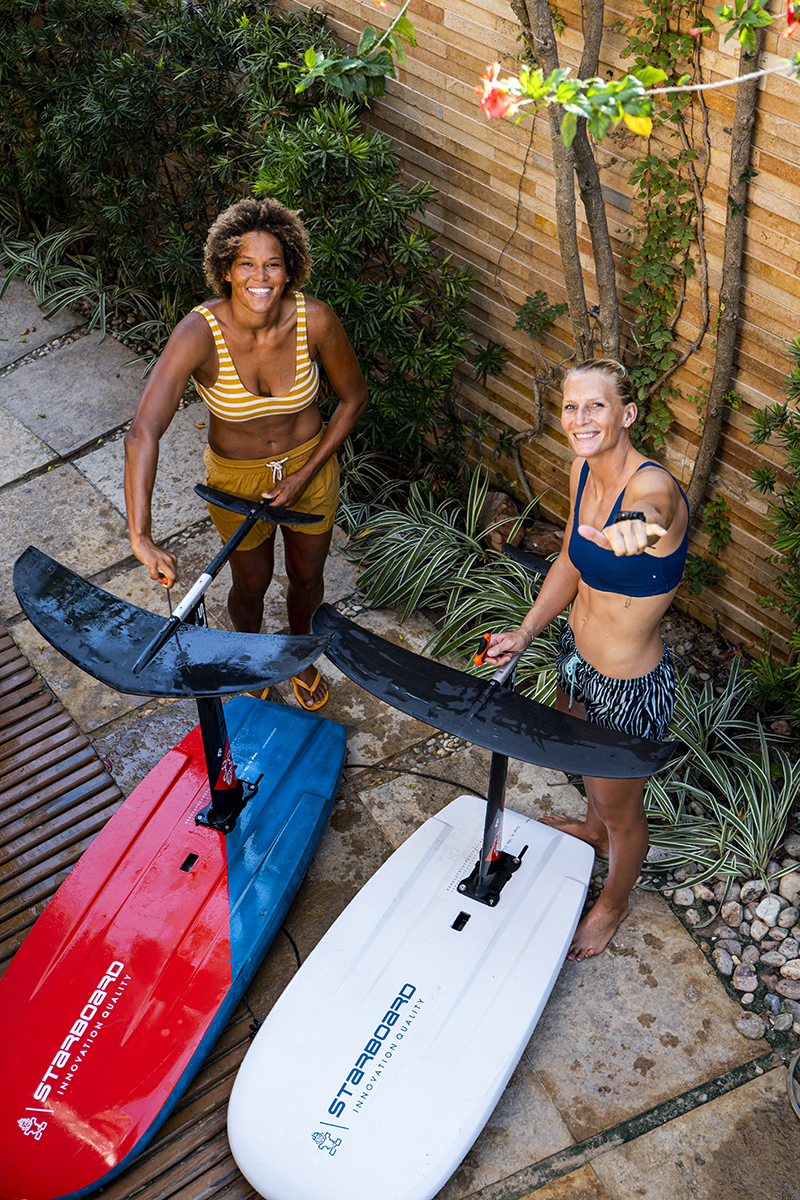 RETURN TO JERI
by ODA JOHANNE 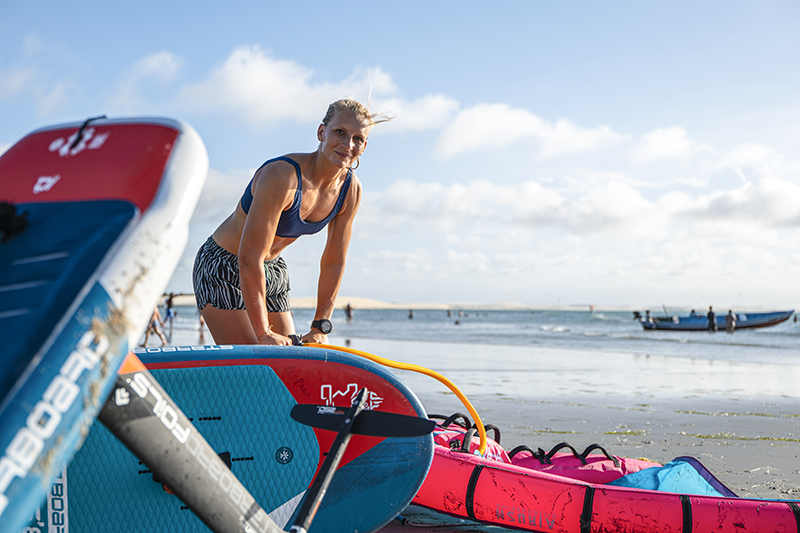 Jericoacoara is a small fishing village in Ceará, Brazil that has become a wind mecca. If you kite, you need to travel out of the city, as kiting is not allowed, but now that wingfoiling is here it is one of the best spots in the world to enjoy it.

Jeri, as it is better known, is the kind of idyllic place where many travelers end up deciding to stay for longer than they had originally planned. And most people come back year after year. It's a place where you feel at home straight away. The warm temperatures, fresh coconuts and wind every day is pretty much all you need to enjoy your time there. It's a place I’ve been to many times, like my second home, so when we decided to go to Brazil to wing, we traveled here.

We had a few weeks before the next PWA windsurfing world cup, so enough time to try to wing as much as possible. I’d learnt to wing a year before, so when we arrived in Jeri the first thing we did was wingfoil during a crazy sunset. I came off the water pretty stoked about what I’d learned during that session, and also how well my gear was working when I was gliding on the swell and jibing around on the water! Sarah-Quita on the other hand was not sharing the same stoke that I had, so I had to reassure her that if she could just put in a few more hours on the board and discover that first glide on a wave, I knew she’d be hooked, just like me. We travel 300 days a year together, so I know the kind of adrenaline she needs to be stoked… Sarah doesn’t like to sit on the beach when I am out there learning new stuff, so it was not hard to motivate her, and it didn’t take long before she figured it out. In the end, she was the one asking me to join her for a wing session… Game changer!

It was fun to shoot and film with Christian while we were there. We wanted to be as on it as possible before he arrived, so we did put in the hours beforehand. We have a video series called Lovely Holiday, so we were excited that the next episode would feature winging. It was great fun to make, and a bonus that we could improve our skills during the shoot.

Normally when I spend my winter in Brazil, we sail when the tide is lower. When it’s high tide, the spot is too close to the town, so the wind on the inside is really bad. For many years I have sat on the beach praying for the tide to drop so we can have fun windsurfing. But with winging, it turns out that high tide is the best tide, and that gave us an opportunity to spend hours on the water every day. Bad windsurf conditions have now turned into dreamy wing conditions. Perfection, and almost hard to believe.

Winging is also offering opportunities for fun downwinders along the Brazilian coast, for miles. I saw plenty of wingfoil groups heading downwind on small swells and having the time of their lives. You can visit places and sleep in different pousadas along the coast, just like kitesurfers have done for years. Winging is opening up whole new adventures. I’m sure we will see more of this in the future. 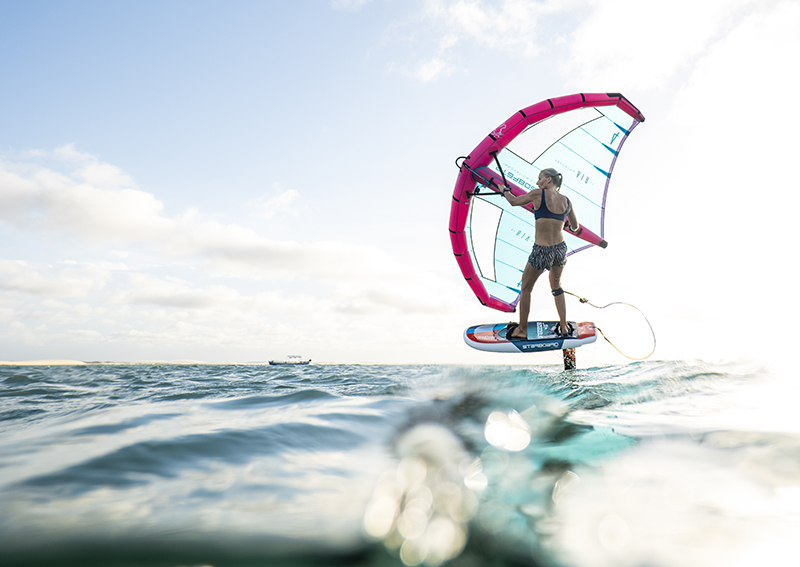 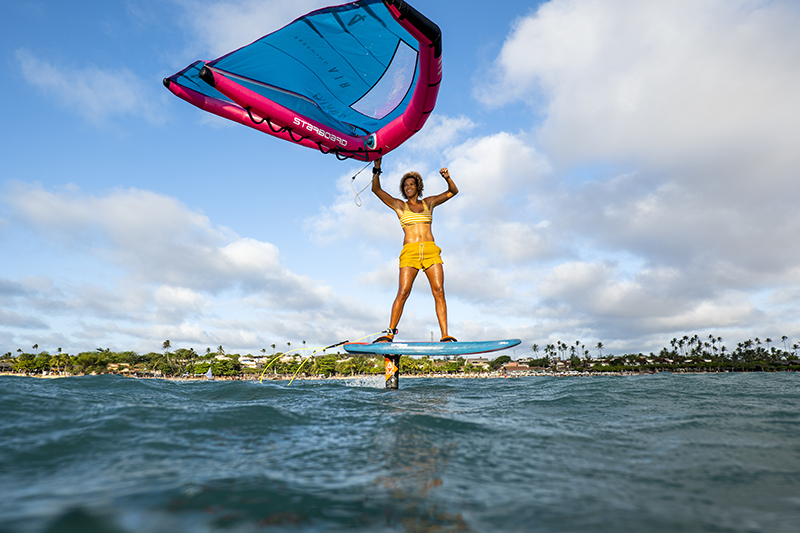 Traveling to Brazil this year I also brought my own wing gear besides my usual windsurfing gear. The conditions there are meant to be awesome for gliding down the swell. Oda already experienced that the year before and told me about how that was what she was dreaming of when she made it back to Brazil.

Both Oda and I get sucked into new disciplines easily. It’s just too much fun to learn something new. Except in this case… I didn’t like winging at all! The excuse was that I felt like I already knew all the sensations that winging was presenting me. I can already foil, I can already windsurf and I can already kitesurf. I didn’t feel like winging was adding a new feeling for me. But in reality, I just could not figure out the tack and jibe and found myself falling off and climbing up the board countless times. I was tired and frustrated most of the time trying to learn these maneuvers. At this point of course everybody is posting on social media about how much they’re enjoying winging and showing how effortlessly they glide across the water. When I felt like it really wasn’t that simple!

Oda made a point out of winging more often in the summer so we could ride the swell in Brazil later in the year. Good for her, because when we came to Brazil she was already rocking it while I was still trying to figure out the jibe. Some of the locals were absolute legends, doing backflips off the waves and pumping from one wave to the next. I was watching everything from the water while struggling to get back on the board. Those sessions were kind of cool though as we would be on the water till sunset and having so many cool people around just enjoying the conditions was awesome. Except for the fact that I wasn’t one of those cool people…

Almost every day at lunch we would meet Mariela, one of the locals and she would gush about how much she loved winging. You could tell she was hooked. She’d be on the water before everyone and off the water after everyone. One day we calculated she was on the water for five hours straight… Her response to this was that the conditions were too good and actually she was just avoiding having to work.

I changed settings on my gear every day and – finally – after the fourth or fifth session and having tried other people’s setups, I realized what I needed, and that was more lift from the foil. My board would be pointing down and drop very often. Of course, once or twice I also forgot to tighten the screws properly. So finally, I had my foil mast more forward and the back tail wing also more forward so it would create more lift. Instantly I felt more stability and it gave me confidence to go switch mid-air and then do jibes. All of a sudden, I was catching waves and riding them on my own terms. What a change of events! I felt this joy slowly creeping in… This was more fun than I thought.

Some days Oda sent me out to practice, before our videographer arrived in Brazil, so that we could do tacks and jibes together in front of the camera. But you know when it finally clicked for me? When the photographer was actually laying in the water. All of a sudden, I found the balance and technique. I busted out one handed jibes, learned to do foiling tacks around the photographer and even caught myself dropping and sitting on the board. Anything for a good photo or clip, right?! Those end of day sessions shooting with Christian were awesome.

The last day of our trip was absolutely magical. By then I already had some practice catching the waves so this day was just pure joy riding swell after swell. It was high tide so you could ride the wave far inside where there wasn’t any wind. So then the most amazing part was holding the wing behind you and just cruising and connecting with the wave. Everything felt so effortless and free. We went on for hours on end and couldn’t stop. At night my legs were so tired from pumping onto the waves…

Mariela gave me the best saying of the trip that day. While riding, I yelled at her, “Mariela, This is amazing!” And she replied, “Yes it’s amazing. Winging is like açai!” Açai is one of the local foods that at first takes time to get used to but finally you love it and can’t get enough of it. And I think that’s true for my winging experience as well… 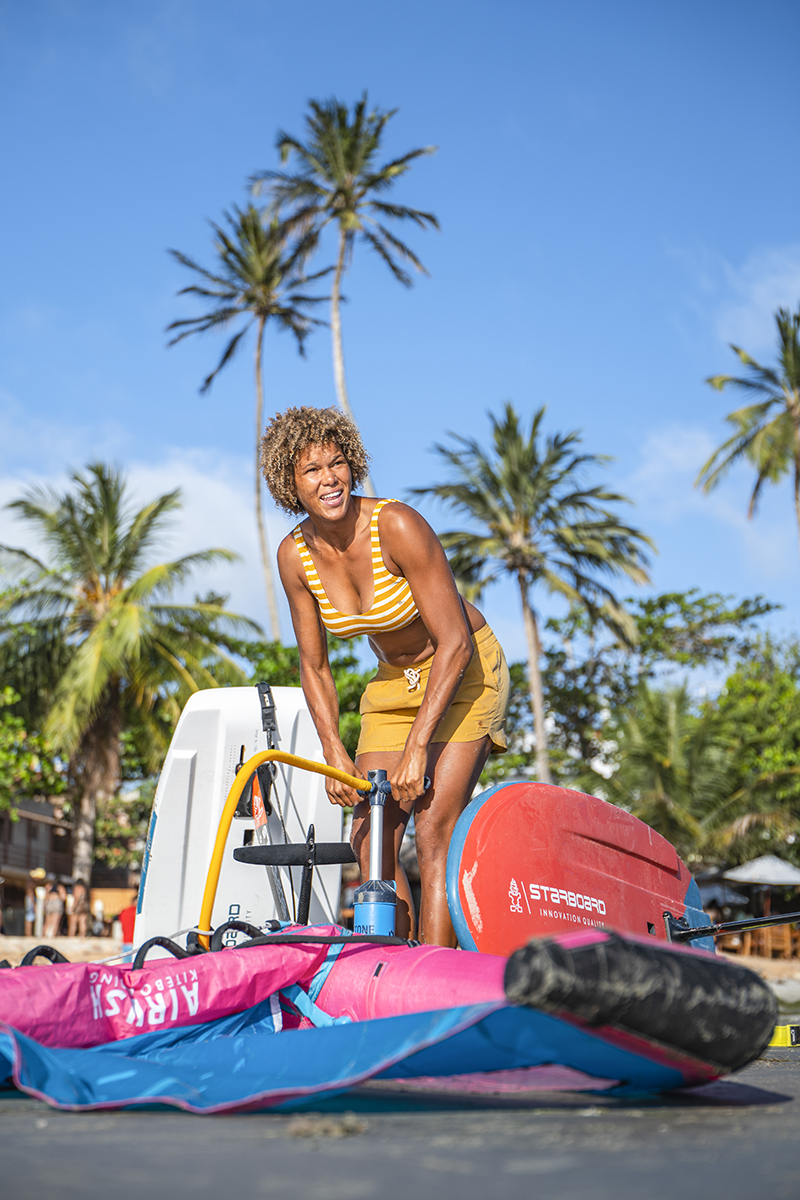