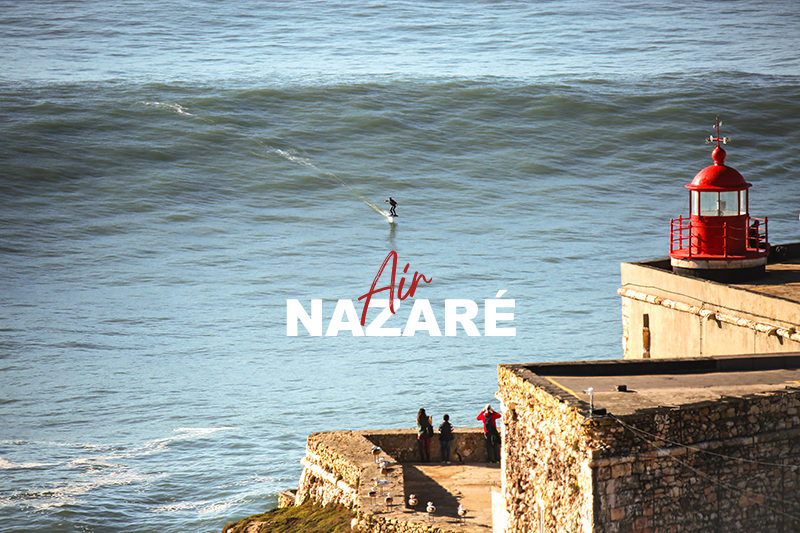 Over the winter, Fliteboard team riders Glyn Ovens and Tom Court rode the biggest swell ever taken on with an electric foil, charging enormous faces at Nazaré, one of the planet’s most famous big wave spots, and all done under battery power and with plenty of careful preparation. You can find the films online, but we wanted to hear how it really felt from the riders’ perspective… 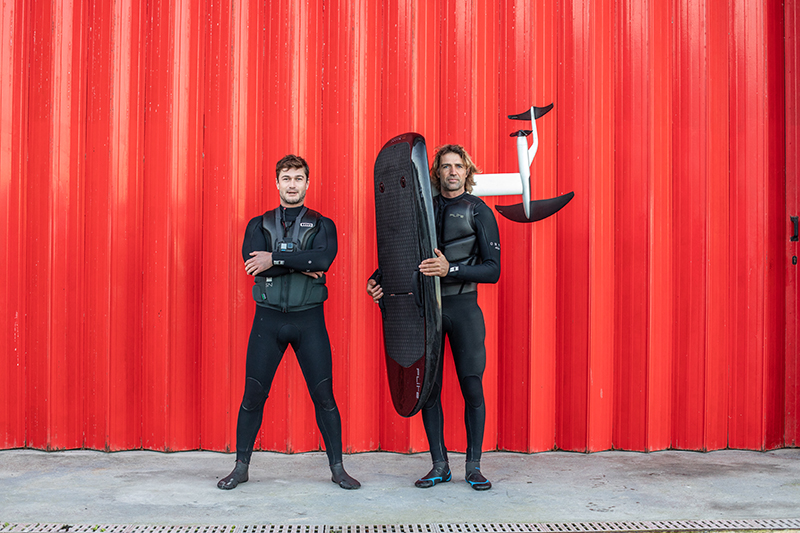 As Glyn and I have worked and spent time with each other in the past, it was always our sharing of wild ideas that brought us together. One such wild idea (cooked up as we were demoing the new Fliteboard electric hydrofoils in the UK at Southampton boat show) was to take them to Glyn’s home spot at Nazaré in Portugal and ride the world’s biggest waves. Like all ideas, this relied on a lot of outside chances for it to come together, but after emails, calls and a lot of enthusiasm, the wheels started turning to line up the conditions and pull the trigger on the plan. Seasons aligned, deliveries arrived, Covid restrictions lifted and the long range forecast came in… it was time to play!

After several warm-up days, tow foiling at the break and a little tow surfing in order to feel comfortable with the undertaking, the swell hit, doubling in size overnight. The Nazaré XXL Paddle-in contest gave the green light and that was the moment we dropped the Fliteboard in the water. Side offshore winds, groomed faces and 30ft humps of high-speed power started rolling through.

For these massive waves we went for being able to handle the speeds that we predicted, so we used the True Glide prop, Race 700 front wing and race stab. We also chose to use the Flite Pro board, rather than the Ultra due to getting started easier and faster between the waves. That little bit of extra buoyancy paid off too! Double impact vests and buoyancy for the crashes and the possibility of getting caught out… Helmet. GoPro. Good to go!

There is a lot going on in your head when you’re amongst the biggest waves you have ever seen, let alone been in, you’re riding a high-speed electric hydrofoil and you have to judge where to put yourself in the wave and then potentially deal with the consequences. It was a high adrenaline morning, followed by higher adrenaline afternoon, as the swell gradually built with the tide. Pushing the limits of the equipment and definitely setting the comfort zone to one side, everything came off, nature delivered, and it was one of the peak moments in my hydrofoiling journey so far.

Ever since I first saw a Fliteboard, I knew they had potential. Hydrofoiling in general has revolutionized how we use the ocean, across so many aspects, I think this project really proves that it is possible to make these boards perform not just in ordinary situations but in the most extreme environments. This could lead to all sorts of innovation, enabling some of the most incredible sessions, just you and the elements, without jet skis, riding ocean swells… the vision is just starting to come into view! 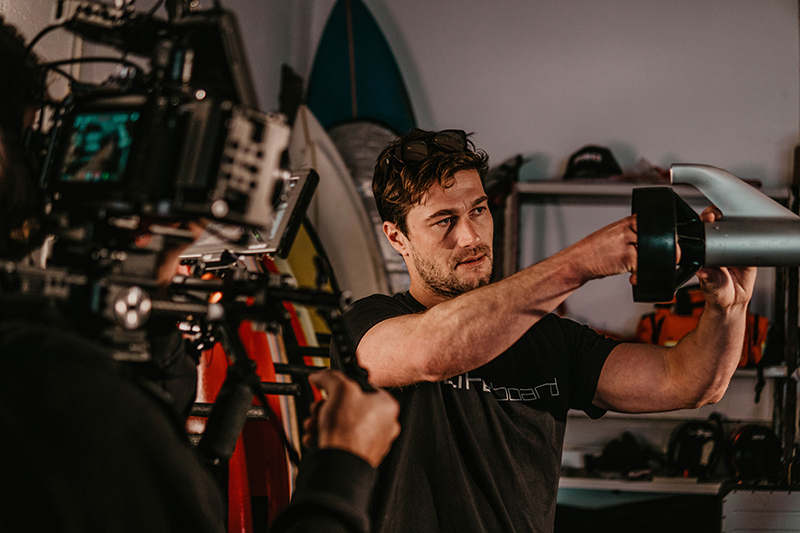 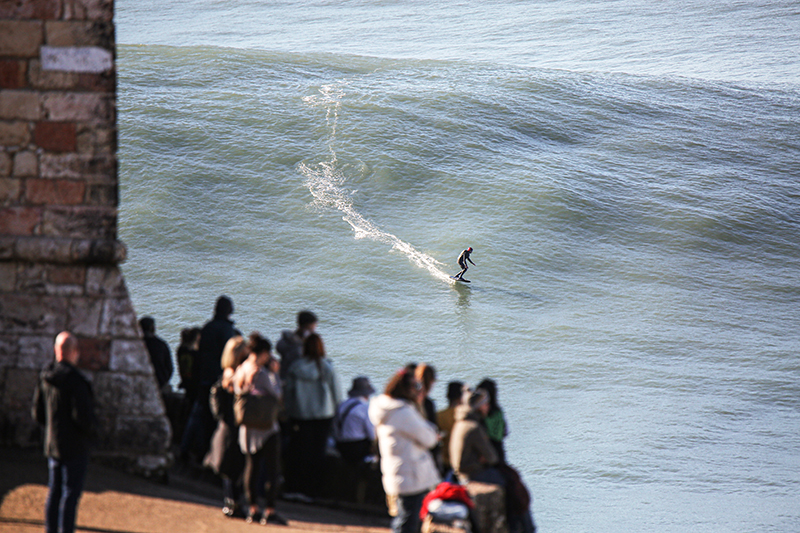 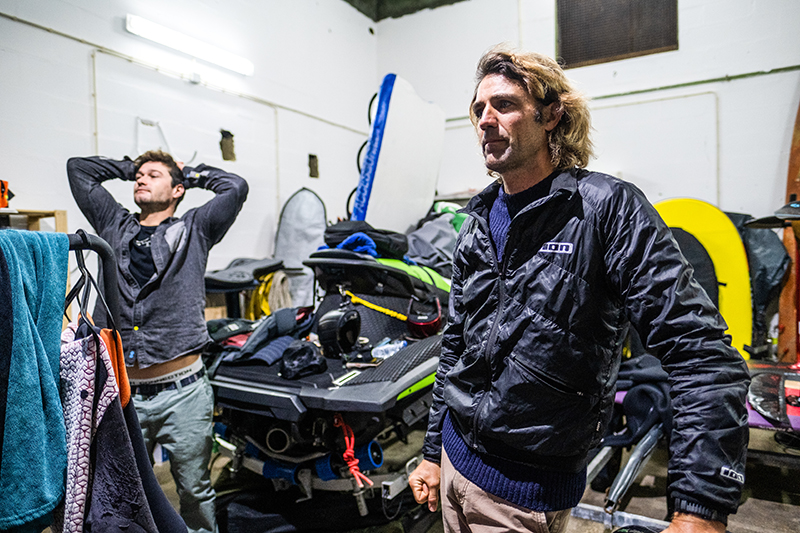 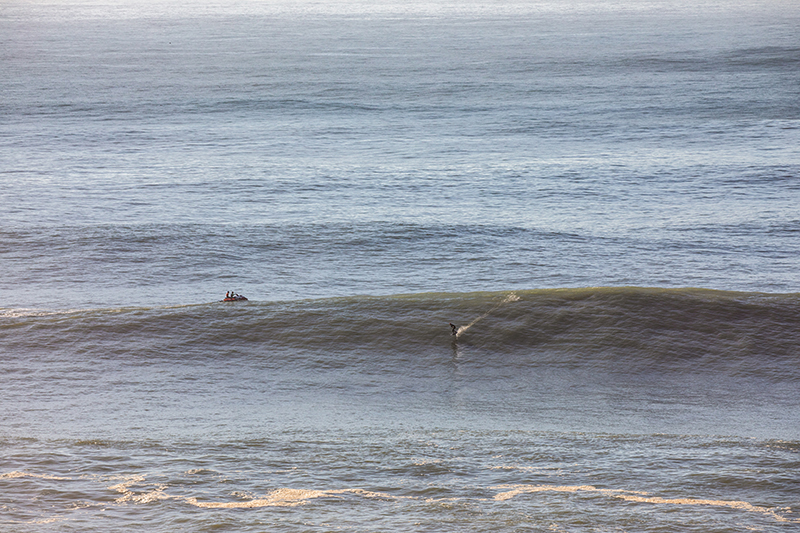 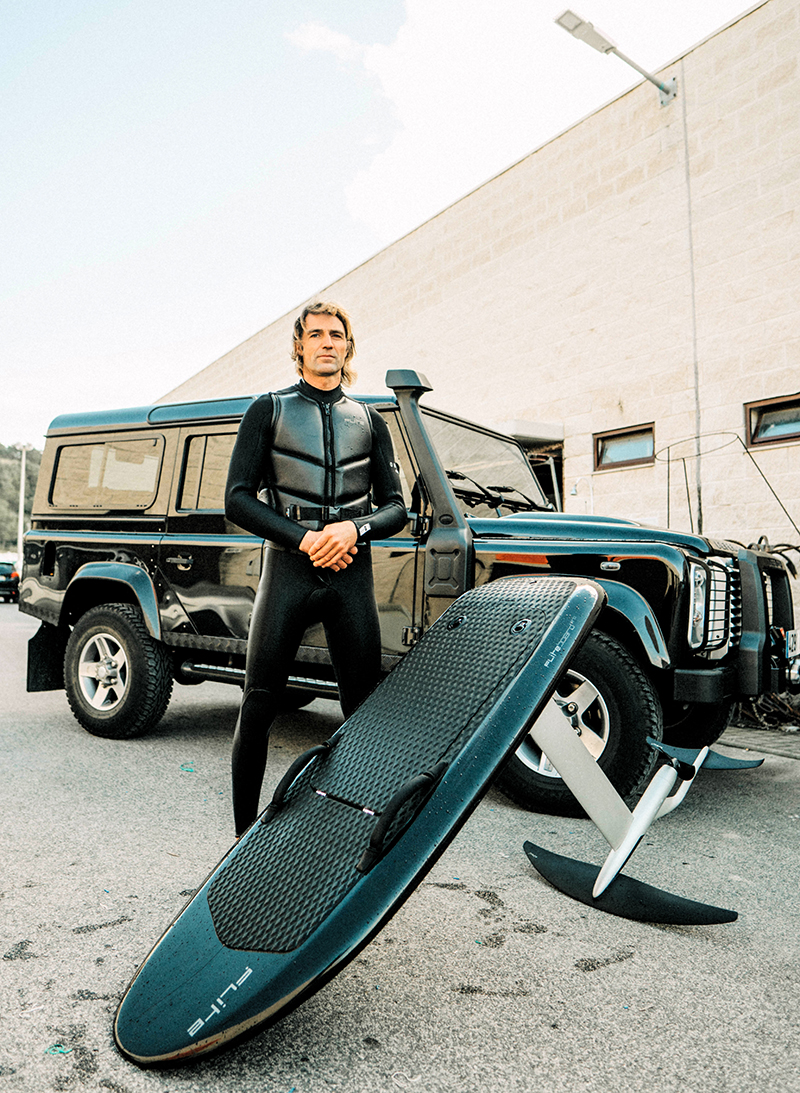 Tom and I have been getting up to mischief for several years on various water-based projects. We love coming up with new adventure ideas together and this is how we pass our evenings when hanging out. Our shared passion for foiling led us down the path with Fliteboard, and before we knew it, we were standing in Nazaré harbor, giant waves pounding the iconic lighthouse cliff, Fliteboard under arm… We were really going to do this.

Warm-ups, training days… I knew if Tom could manage his nerves, being less familiar with the place, he would be able to charge it, so the first few days were all about getting him accustomed to power, energy, and the general feel of the place… getting as many waves under his belt as possible, and a few smashings too…

Myself and my good friend/safety driver/waterman Nuno Santos have been building and improving our base in Nazaré over the last eight years, pushing ourselves further with foiling as well as some other ‘interesting' craft we’ve toyed with, but whilst using ‘traditional' tow-in as a propulsion mechanism. We have been lucky enough to have some amazing guidance over the years too from key foilers from around the world, and this has given us the tools to be able to attempt things like this. We had never seen this before in Nazaré, but felt it was possible using the correct equipment, set up correctly, on the right day and with all the stars aligning… not a lot to ask, right?!

To ride a Fliteboard e-foil in these waves was a unique challenge, which came with a myriad of unknowns and new ways to get in trouble. Music to my ears. Taking a concept that was born out of calm waters and small waves and putting it in front of the wild Atlantic behemoth that is Nazaré was always going to be interesting.

Taking turns to ride waves and then digest what had just happened whilst sitting on the ski with Nuno – it was a surreal experience of elation, having just ridden some huge slices, the relief to be back on the ski, but also the froth to get back out on some more waves. We were forever checking in with each other: “Sick wave! How much battery is left?”. It was froth and fear, blended together perfectly.

Nazaré and this new level of big wave surfing is so intertwined in teamwork, that it is impossible to even consider attempting anything without it. A team should consist of – first and foremost – good people, people who are trustworthy, constant and with a tempered mind, humble (rare in the big wave world). All this can be easily overlooked, as the focus can be skewed to their surfing ability alone. It’s simple – we all go out there together, we all come back together. Riding the wave is just the pinnacle of all that groundwork and teamwork.

We were fortunate to have had no ‘mechanicals' during the session, and we never ran out of battery. The gear was really robust and predictable, even at the higher speeds. The True Glide prop definitely made the difference at the top speeds, as the insane amount of wave energy peaked, the glide remained even. We were also very glad to not lose any gear either, despite having backups of everything. Ourselves and the team at Fliteboard had left nothing to chance.

I enjoy the journey of learning a new discipline. The trade-off is you appear to be terrible at it in the beginning, but the improvement process is addictive. There are definitely gains that you wouldn't achieve in an individual sport alone that you get from crossing over into these other disciplines… 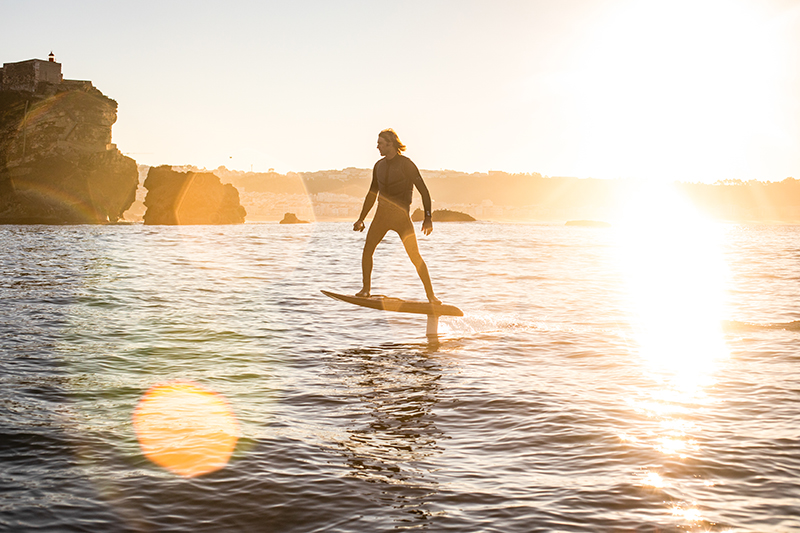 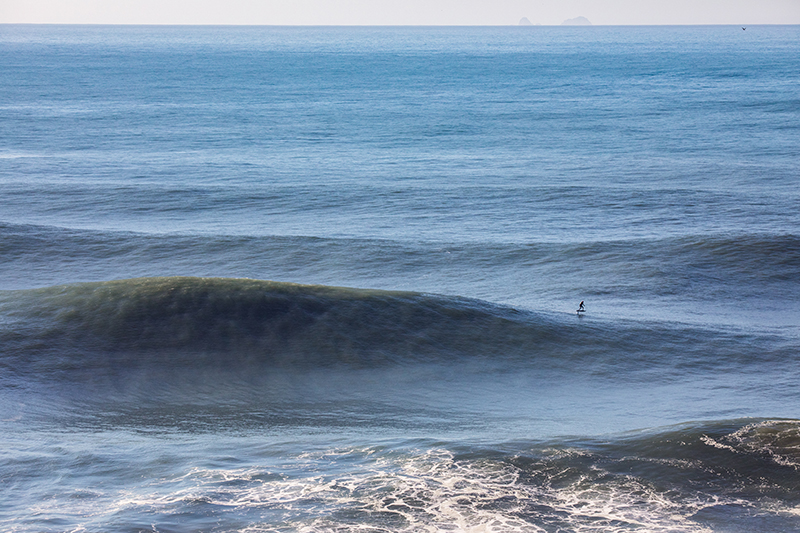 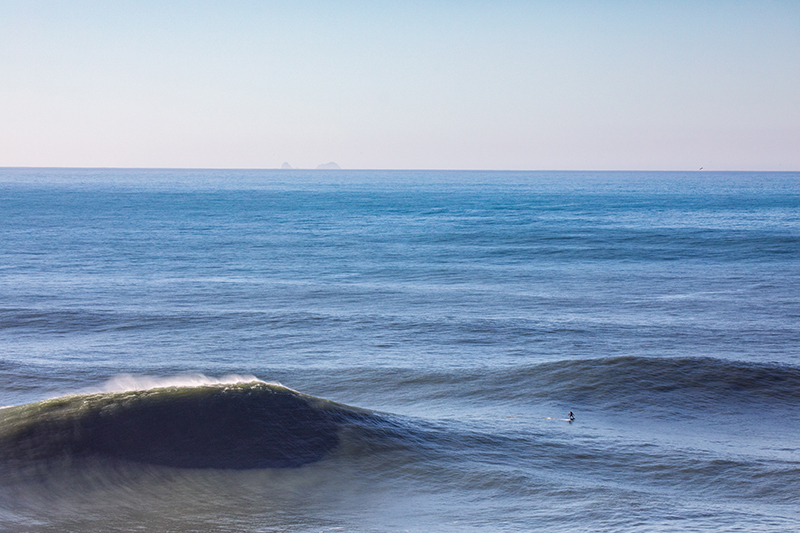 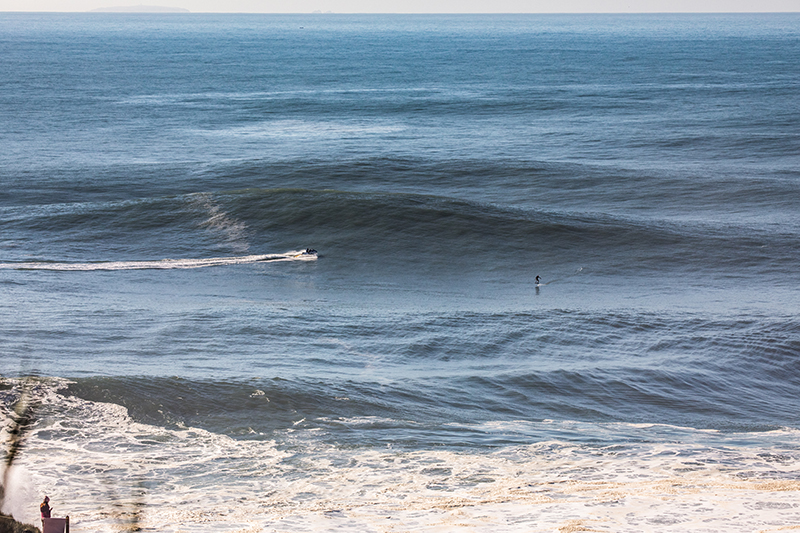